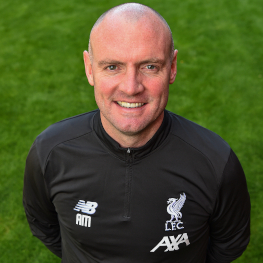 Andrew Massey joined the Melwood backroom team on a full-time basis in July 2015 as Liverpool’s head of medical services.

Andy began his career in the game as a professional footballer in the Irish league; however, an injury encouraged him to take up a university course studying physiotherapy.

Upon graduating with a BSc (Hons) degree to his name, he took on a placement with the Victorian Institute of Sport, where he commenced a Masters in Sports Physiotherapy and completed a qualification in Strength and Conditioning.

Andy began studying medicine in the UK in 2002 and also started working as the Belfast Giants ice hockey team's physiotherapist.

He graduated from Queen's University Belfast in 2007 and one year later was appointed team doctor with the Belfast Giants.

In 2009, Andy returned to football when he was appointed as national team doctor with the Irish Football Association - a role he combined with a similar position at Linfield FC.

He completed an MSc in Sports Medicine whilst also training as a General Practitioner and was awarded a Fellowship of the Faculty of Sport and Exercise Medicine.

Andy joined Liverpool FC in 2013 as the Academy doctor and match-day medical co-ordinator, before acting as first-team doctor on an interim basis in 2014 - a position that was made permanent the following year.