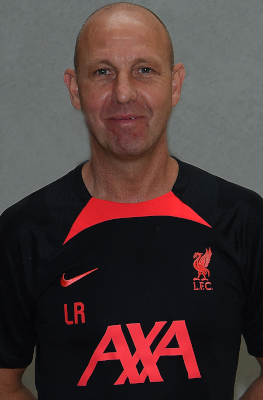 Lee Radcliffe has worked for Liverpool Football Club for almost a decade - but in 2011-12 was promoted to the role of kit management co-ordinator.

Initially employed as a supervisor to keep the busy Melwood training complex ticking over, Lee secured a position as the reserve-team kit man.

However, a year later the life-long Kopite was promoted to work alongside kit man Graham Carter and help ensure the likes of Sturridge, Henderson, Coutinho and co are kitted out correctly each and every time they train or play - whether that's home, away or aboard.

Now he heads up the kit team at Melwood.

"For Graham and myself, as long as we have the right boots and kits prepared on matchday then we're happy," explains Lee. "The main thing is to make sure the players have got what they need for a game and that way our job is done.

"Then after a game, we have to get the kit ready again, folded and put back in the tins ready to travel to the next match.

"We'll look at all the first-team players' boots they wore on matchday, make sure they're cleaned up and check that no studs have loosened - the last thing you want is someone's studs coming out during a game."

Lee worked as prison custody officer for Group4 before taking up a role at LFC - and he admits working at Melwood on a daily basis is something of a dream come true.

He says: "It's just unbelievable. Sometimes you sit down and think, 'Wow, what a job.'

"But on a day-to-day basis you just have to get on with your job and try not to get too carried away with the football side of it.

"But it's absolutely amazing and I love working for the club. I couldn't ask for anything better."