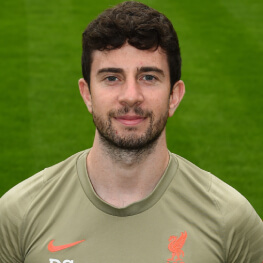 Daniel Spearritt began the role of post-match and elite player development analyst with the Liverpool first team during the 2020-21 season.

He stepped up to working with Jürgen Klopp’s senior squad after previously serving as a performance analyst with the U8 to U14 age groups and then the U23s at the Academy.

Daniel completed an undergraduate degree in Sport and Exercise Science at Chester in July 2012 and stayed on to complete a master’s in Performance Analysis, graduating in January 2014.

He joined Liverpool’s Academy in August 2014 as performance management application super user. The role was to oversee the use of the PMA website by Academy staff as well as providing support for any queries or problems they had in their day-to-day use of the system.

Spearritt moved into his analysis role in January 2017.

Now he works alongside Mark Leyland, head of post-match and elite player development analysis, with the first team at the AXA Training Centre.