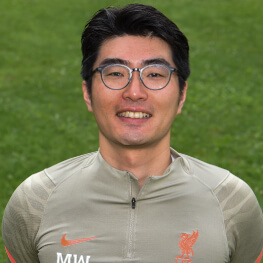 Motonori Watanabe joined the club’s medical department ahead of the start of the 2020-21 season in the role of masseur/therapist.

He arrived at Liverpool with more than a decade of experience in treating a wide range of musculoskeletal injuries, both within professional sports and clinical settings.

Born in Japan, ‘Moto’ moved to the UK in 2002 to study. He graduated from the University of Salford with an honours degree in sports rehabilitation in 2006.

He then returned to Tokyo afterwards, where he assumed a role at a sports injury clinic, treating both amateur and professional athletes, including national judo champions and sumo wrestlers.

It was in Japan where Motonori also gained a qualification as an acupuncture and moxibustion therapist from the Tokyo College of Medical Sports.

In 2011, he came back to the UK to work in various sport injury clinics in central London, before being appointed in the position of sport therapist for Watford in 2012.

He remained with the Hornets until 2018 prior to joining Bristol City in a similar role before the Reds came calling following their Premier League title triumph.

Moto’s role within the medical department includes treatment on various injuries and niggles, as well as massage therapy working alongside Paul Small and Michelle Hudson.

He says: “It feels amazing to be a part of Liverpool FC. When I first stepped into Melwood it felt different; I felt in the first five minutes that everyone loved working at Liverpool and put pride into their work.

“In that environment, I felt like I was joining the best club in the world and that is an amazing feeling.”