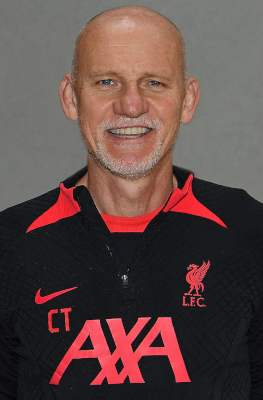 Claudio Taffarel’s appointment as a goalkeeping coach in the Liverpool men’s staff was announced in November 2021.

The Brazil legend joined John Achterberg and Jack Robinson as part of the team that works specifically with the Reds’ contingent of ‘keepers at the AXA Training Centre.

Taffarel’s duties are combined with the position he holds for the Brazilian Football Confederation as national team goalkeeper coach during international periods ahead of the 2022 World Cup.

One of the most iconic goalkeeping figures of the modern era, Taffarel claimed 101 caps for his country during a distinguished playing career, winning the World Cup in 1994 and finishing with a runners-up medal four years later.

He represented several clubs in Europe, including Parma and Galatasaray, before hanging his gloves up in 2003.

Explaining the appointment, manager Jürgen Klopp told Liverpoolfc.com: “The idea is that, in our opinion, we have now in a lot of positions the best we can imagine.

“In terms of goalkeepers, it means we have Alisson Becker, who for us is the best goalie in the world. We have Caoimhin Kelleher, who we really think is an exceptional, exceptional player. We have Adrian, who has shown his qualities since he arrived here. Then we have Marcelo Pitaluga, then we have Harvey Davies, so we have five goalies in different age groups, which is great but we want to have even more of these guys.

“We want to build kind of our own philosophy in goalkeeping because we all agree it’s its own game, so that’s why we wanted to have another completely different view on it. We spoke to Ali because two of the best goalies in the world are Brazilians and so we found a solution with bringing in Taffarel as a really nice addition to our whole coaching staff. We really think it can give us just a different view again, to look at different things.

“We really want to really be a proper goalkeeping school in world football and so that’s why we’re bringing in a third very, very experienced goalkeeper coach.”