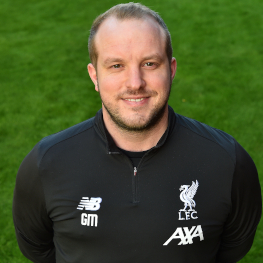 Our head of opposition analysis, Greg Mathieson, was born and raised in East Ayrshire - the home county of a certain Bill Shankly.

The Scot, who arrived at Liverpool from West Ham United in January 2015, began his career as a teenager when he left home to study sports coaching and earned a coaching role at Dundee United.

Having been offered the chance to move to Liverpool, he explains what his day-to-day responsibilities at Melwood entail: “Our key aim is to give the coaches a platform to prepare for the next match, with the opponent in mind. We present specific information to the manager and coaching staff through documentation and video.”

Greg’s role on matchday is rather different to most members of staff at the club, as he will ordinarily observe Liverpool’s next opponents, rather than the Reds.

He adds: “Another key role is attendance of live matches - an important component in our understanding of the opposition.”