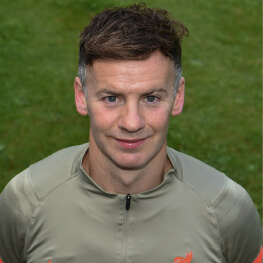 Dr. Conall Murtagh joined the Academy in July 2012 and moved to first-team duties at Melwood five years later, having been a sports science practitioner since 2010.  Working in football at the top level has been Conall’s burning ambition since childhood.

Conall states: “I consider myself honoured to be working at such a world-renowned football club. I enjoy every minute of working with top-level players and being part of a world leading integrated team of coaching, medical and fitness staff.

“Our objectives are to ensure that we provide the most cutting edge and innovative sports science support to our players that will allow them to maximise their fitness and physical performance levels.”

Conall was awarded a PhD investigating the ‘Physiological Determinants of Soccer Specific Power’ in Spring 2017 at Liverpool John Moores University. He completed the MSc Degree in Sports and Exercise Sciences (University of Chester 2012) and a BSc (Hons) degree at University of Manchester in Physiology (2010).

He became an accredited member of the coveted United Kingdom Strength and Conditioning Association (UKSCA 2013), is a UEFA B Licence qualified coach and is completing his UEFA A Licence.

Conall has published leading football research in high impact peer reviewed journals. He was a keynote speaker representing Liverpool FC and Liverpool John Moores University at the Sao Paulo Sports Science Congress in October 2015, hosted by Brazil’s Palmeiras club, and was also a speaker at the 20th Annual Congress of the European College of Sport Science in Malmo, Sweden, in June 2015.

During his days as a player, Conall represented Northern Ireland at all age groups up to and including U21 level. He played professionally at Hearts, Wrexham and The New Saints, semi-professionally for Bala Town and competed in the Europa League for five campaigns.