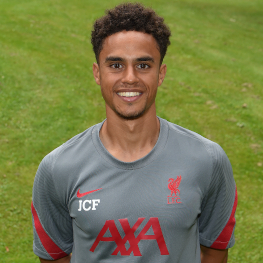 Jordan Fairclough joined Liverpool’s first-team fitness department at Melwood in the summer of 2019 on a full-time basis.

His association with the Reds first began in October 2017, when he started an internship at the Academy working with the U11 and U13 age groups and assisting with the U15s-U23s.

In April 2018, Jordan moved to Melwood’s fitness department, where he remained beyond the conclusion of his placement on a fixed-term basis for 2018-19.

Among others, regular duties include planning, adapting and executing pre-training drills with the squad’s younger members, assisting Dave Rydings and the physiotherapy team with rehabilitation work, delivering injury-prevention sessions, aiding recovery methods and helping out with player warm-ups and cool downs.

Prior to joining Liverpool, Jordan spent 10 years as a footballer in Nottingham Forest’s academy, figuring for the first team at right-back during the pre-season schedule of 2009-10. During his time with the club, he completed a level 2 FA coaching badge.

After leaving the City Ground in 2010, he played semi-professionally for Shepshed Dynamo, Corby Town and Boston United before hanging up his boots to take up a degree in sports science and pursue interests in athletics.

Indeed, Jordan continues to train as a track and field sprinter, competing in events between 100m and 400m, and he qualified to take part in the British Championships in 2015 and 2016 through Loughborough University. His personal best in the 100m is 10.76s and his experiences gleaned from sprinting form part of the work he does at Melwood.

Jordan graduated from Loughborough University with a degree in sports science in 2015 and is currently undertaking a master’s degree in strength and conditioning. He also holds qualifications in sports massage and sports nutrition.