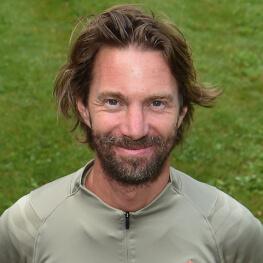 Andreas Kornmayer joined Liverpool in July 2016 as the club’s new head of fitness and conditioning after more than 15 years with Bayern Munich.

The German served as his hometown club’s fitness coach under Louis van Gaal, Jupp Heynckes and Pep Guardiola after being promoted to first-team duties in 2010, but opted to swap the Allianz Arena for Anfield following an approach from Jürgen Klopp.

The Reds boss had long admired Andreas’ work, crediting him with a role in Bayern’s 2012-13 treble-winning season, when the Bavarian club beat Klopp’s Borussia Dortmund to the Bundesliga title, before then also defeating them in the Champions League final at Wembley.

Kornmayer’s journey into football began at Munich University when he embarked on a course in sports science after studying medicine.

When a partnership was struck between the institute and FC Bayern, the coach worked on ‘talent diagnosis’ with the club’s U12 –U15 levels, building profiles on each young players’ abilities via a series of sprint, jumping, coordination, reactive and medical tests.

In 2001, Kornmayer was dispatched by the university to work at Säbener Strasse, where he held both team and individual sessions on coordination and strength, before stepping up to the elder levels of the Bayern playing ranks, including a stint as assistant manager for the U17s.

He also combined this with duties for Bayern Munich II – effectively the Bavarian giants’ reserve side – before Van Gaal added Kornmayer to the first-team backroom staff in 2010 having been impressed by the systems and structures he had implemented across the youth sections of the club.

As well as Van Gaal, the Münchner would also go on to work under Heynckes and Guardiola before Liverpool came calling in 2016.

“Liverpool is a big and a great club with a lot of tradition,” said Kornmayer on his decision to swap the Allianz for Anfield. “On my first experience of Liverpool, when I arrived here, I could really feel the history.

“This was one reason for my decision, but the other was to get new information and a new feeling for another country and the Premier League, which is one of the strongest leagues in the world - possibly the best league in the world.

“When Jürgen asked me about coming here, from my first impressions of Liverpool and words with him, it said to me ‘do it’.

“The plans excited me - but not only the manager’s plans, the plans of the club too. This is a project - a long-term project - to develop a lot of things, and this makes it really, really interesting.”

Based at the AXA Training Centre, Kornmayer works alongside Klopp, Peter Krawietz, Pepijn Lijnders, Vitor Matos, John Achterberg and Jack Robinson in preparing and training the team, ensuring they’re as fit and as ready as possible for matchday.

He said: “I try to get everything fixed, done and in motion so that everybody is really clear on what they have to do. We have to put things together – we have several connecting points with each department, so we have to put them together to get the best out of the squad.”