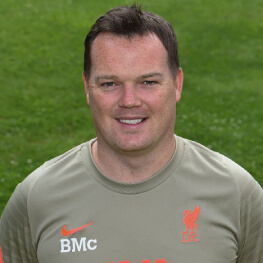 Brendan McIlduff is kit co-ordinator for the Liverpool men’s team.

He joined the Reds’ Academy as kit man in January 2015 following a six-year stint working for the Scottish Football Association and national team.

When the long-serving Graham Carter departed his role at the AXA Training Centre at the end of the 2020-21 season, McIlduff stepped up to working with Lee Radcliffe – kit management co-ordinator – for Jürgen Klopp’s senior squad from that summer.