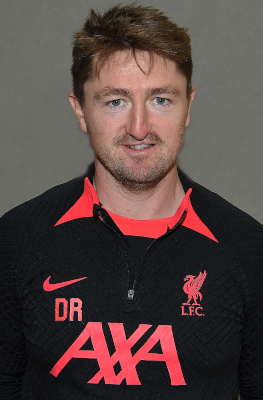 David arrived at Melwood in July 2011 as part of the club's link with Liverpool John Moores University.

His role focuses on rehabilitation of the players, meaning he works across the club’s medical and fitness teams at first-team level.

“My role is quite varied but predominantly involves pitch-based rehab sessions,” he explains.

“It includes helping to write specific player programmes and I take quite a lot of the responsibility for quantifying the amount of work they take on.

“Once a player gets injured, we work closely with the physio to guide players back from day one back to being fit and available to play, which includes gym-based training and pitch-based rehab training.

“I love it here. All of the players are great lads and really good to get on with.”

A role at John Moores University and the institute of sport followed, as part of the fast-track practitioner programme.

“I spent three years at John Moores and was sub-contracted to work with various teams, including the Everton Tigers basketball team, Widnes Vikings in Rugby League, as well as the English Institute of Sport,” says David, who has since finished a PhD in sports science while working full-time at Liverpool.