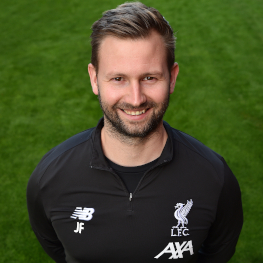 Born and raised in Portugal, James moved to Scotland where he graduated in 2010 with a degree in Applied Sports Science at the University of Edinburgh.

Between September 2010 and June 2011 he was an intern at Swansea City FC, working alongside Liverpool's former head of opposition analysis, Chris Davies, and under the stewardship of former Swansea and Liverpool boss Brendan Rodgers.

From there James secured a role as a performance analyst with the Football Association of Wales, while he simultaneously studied for a Master's degree in Performance Coaching and Analysis at the University of South Wales.

After 11 months with the FAW, James arrived at Melwood to begin work as a member of Liverpool's staff. He is now an integral part of the analysis department under Jürgen Klopp.

James added: "It's an honour to be working at one of the biggest clubs in the world."