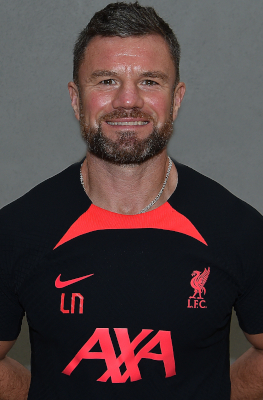 He moved to the Reds from Manchester City, where he’d spent the previous 11 years having joined the club from Oldham Athletic and having previously working at Bury FC in similar roles. Lee truly values the experience of working in the lower leagues of English football and this really helps him appreciate the environment that he now works in.

“I have been lucky enough and had the pleasure of working with some of the best managers in the world. I was also lucky enough to thrive at MCFC at the most successful period in the club’s history,” Nobes said.

“However, the new challenge of coming to work at a club such as Liverpool, and to try to win trophies with another Premier League team, was too much to resist. That dream has now become a reality with the recent Champions League and Premier League wins.”

At the AXA Training Centre, the Jersey-born Nobes works as part of the Reds’ performance and rehabilitation team, heading up the Physiotherapy department.

He added: “Working as part of a big, multi-disciplinary team alongside the fitness and sports science guys enables us to provide the players with the best level of care.

“This includes the preparation and recovery for training and games, or on all aspects of a player’s rehabilitation upon return from injury. Being able to work so closely among some of the world’s best players and staff, and share the success of the team, is a huge privilege and something that I’ve worked very hard to achieve.”