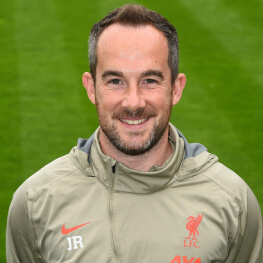 Robinson joined the club from the Football Association to take up a new position alongside John Achterberg in the Reds’ backroom set-up.

Prior to his two-and-a-half years working with England’s U15-17 stoppers, he had spells with Manchester United, Crystal Palace and Leeds United.

“It’s great to be at Liverpool, a club with such a real and rich history of success and winning trophies,” said Robinson, who holds a UEFA A licence in goalkeeping.

“Hopefully I can come in and help the club continue to develop on the upward journey it is on.

“It was a difficult decision to leave the FA as I enjoyed my experience and time there, working with some great people and players, but an opportunity to work at a big club like this with a successful manager and team was too good to turn down.

“I’ll be working alongside John with the ‘keepers and helping deliver the sessions, as well as looking at some of the younger goalkeepers coming through – hopefully we’ll see a few more coming through and working at Melwood.”