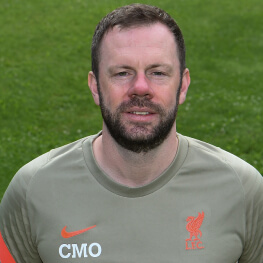 Chris Morgan returned to Liverpool FC in the summer of 2020 as first-team physiotherapist.

He came back to the Reds for a second spell after four years away, during which he worked with Premier League clubs Crystal Palace and Arsenal.

Morgan had previously given 10 years of service to Liverpool, progressing through the ranks from reserve-team physiotherapist to head of physiotherapy after joining during the 2005-06 campaign.

Chris graduated from the University of Bradford in 2000 and worked in the NHS and private practice, alongside work in the academies of Manchester City and Leeds United, before joining the Reds on the first occasion.

He also achieved a Masters degree in musculoskeletal physiotherapy and served as an honorary lecturer at the University of Liverpool when at Anfield previously.

“Working at a club the size of Liverpool gives us unique opportunities to experience incredible moments as part of our working life and as a group of staff we appreciate that every day,” he said.