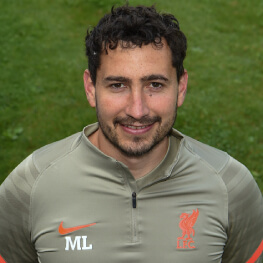 A lifelong Red, analyst Mark Leyland joined Liverpool from Burnley in the summer of 2013.

Mark’s first job in football came on the blue half of Merseyside, when he got a work placement with Everton’s academy while completing his Masters degree in sports and exercise sciences at John Moores University.

He quickly rose to become head of development analysis at the Blues’ academy and stayed there for four years, before moving on to work with Burnley’s first team under first Eddie Howe and then Sean Dyche.

After a season in the Championship at Turf Moor, Mark was offered the chance to join Liverpool - an opportunity he was never going to turn down.

So what does a standard day at Melwood involve for a post-match analyst?

“We cover all aspects of live match and post-match analysis. Our job after a game revolves around us breaking down the game into team aspects and individual player aspects relating to the manager’s philosophy,” Mark explains.

“We database statistics and video in relation to how the manager wants our team to play - both good things, and in areas to improve. We then feed that back to players, as individuals and as a team.”

Mark travels home and away with the Liverpool first team.

He added: “We make video examples of things the coaches would like to see. We relay that through Peter [Krawietz, assistant manager] at half-time in the changing room on a big screen… we use around two minutes of video clips.

“After the game we’ll have anything available that the manager or coaches want to see, through our wide-angled, tactical cameras and broadcast footage.”