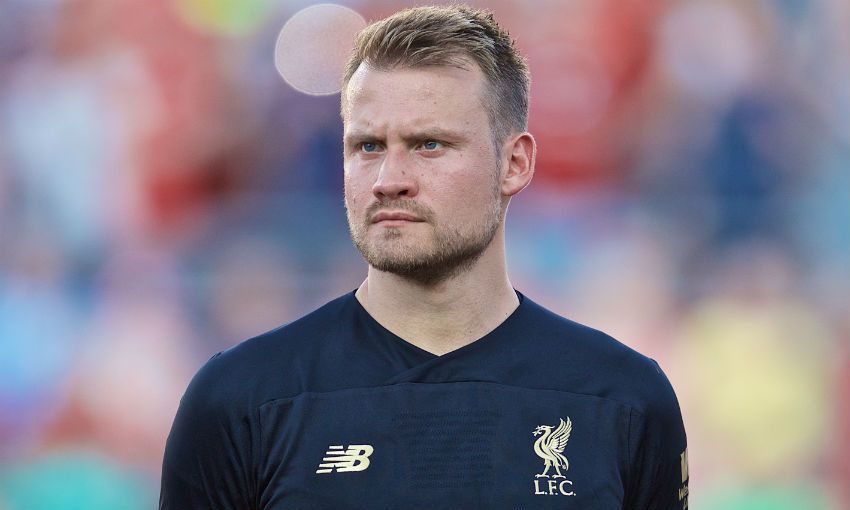 Representing Liverpool for six years was an honour to be treasured by Simon Mignolet, who hopes to return to Anfield either as a fan or an opponent this season.

The Belgium international goalkeeper brought his Reds career to a close on Monday, when his transfer to Club Brugge was confirmed.

However, the day after keeping a clean sheet on debut for his new team in a Champions League qualifier, Mignolet returned to Melwood to say farewell to colleagues and friends at Liverpool’s training ground.

The stopper also took the time to sit down with Liverpoolfc.com for a chat about his spell with the club, what he expects the Reds to achieve in the coming seasons, his wish to come back to Anfield in the near future and much more…

Simon, welcome back to Melwood. You said goodbye to your teammates at Wembley on Sunday, but was it also important for you to come and say your farewells to the staff who work here too?

Exactly. I spent six years here so not only on the pitch but also off the pitch you learn to know people, not only footballers and colleagues but also the people behind it, so it’s always nice to see them back in a more relaxed way than after the final when stuff is going on and everybody has to do their jobs. So today is a bit more relaxed, training is a bit later, and to say a proper goodbye is always nice. I spent six years here, the people know me and I know them so I think it’s only fair to say goodbye before I go back to Belgium today.

You made more than 200 appearances in your six years as a Liverpool player and, of course, became a European champion. Those stats, that record, must make you feel very proud?

Yeah, when you start something off you don’t really think about that [because staying somewhere for] six years in football, these days it doesn’t happen very often, especially at a big club like Liverpool. Spending six years here, I wouldn’t have thought that was going to be the case when I started. So I’m happy about that, it’s been a great ride, with ups and downs as in any career, but I’ll only treasure the great memories and there are plenty of them.

If you had to pick one, what would be your favourite moment from your time here?

Obviously winning the Champions League, of course. That’s why you come to Liverpool, to win trophies, so even though I didn’t feature I felt part of the team and I think the squad recognised as well my importance there in trying to push the team on to win that medal. To do that was the best but there were other great moments also. 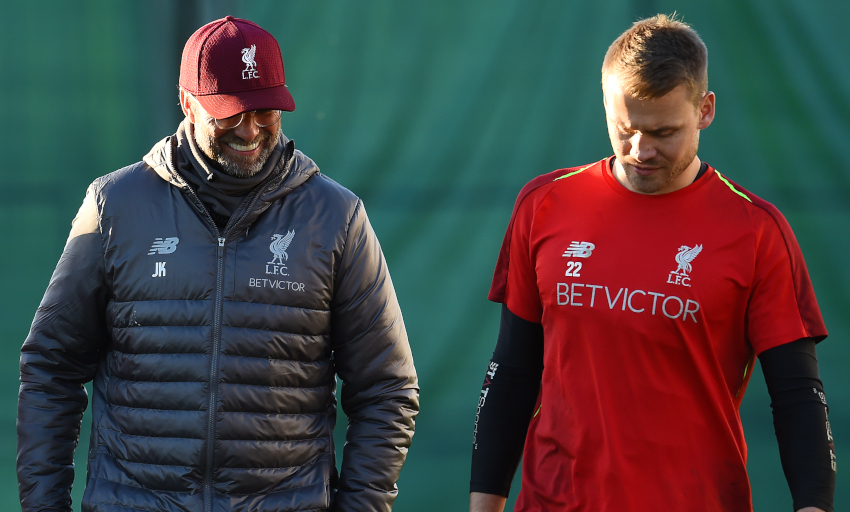 Did you read Jürgen Klopp’s tribute to you after your move was confirmed?

Yeah. Well, it’s been a few manic days, to be honest with you. After the Community Shield final I flew back straight away, I arrived pretty late at night and did some medicals and the next day in the morning again, without much sleep, signed the contract. Then I had to train one session to go into the game yesterday so it all went very quick. But through all that I managed to read a few things and obviously what the gaffer said, you get called about that. It’s nice to hear that from him. He’s been my coach and to see what he thinks of me and what I’ve done for the club, it’s nice to hear. I appreciate that and I take it on board.

How did all the messages you’ve received on social media from teammates and coaching staff, such as John Achterberg, make you feel?

Brilliant, of course. Like you say, John is a special one. He got a bit emotional after the game on Sunday. Of course I spent six years here at Liverpool, but in those six years John has always been my goalie coach, so to come and say goodbye, not only to the colleagues and the staff who you work with, but also the people behind that [is important] and John is probably the biggest one of that because I spent most of the time with him. We always had a good connection, a good relationship. He knows I’m a hard-working guy, that’s what he wants of his ‘keepers, and he knows that I’m a fair person as well, just like he is. In that sense it’s nice to say goodbye, we had a great time together and have great memories of all the good moments we had together and it’s the same with all the players, of course. I think it’s a really good squad, a really good bunch of lads, and I told them that also after the game [Community Shield]. They wished me luck for the future and next season and I said likewise. So that’s why I came back, to tell them that again and say a proper goodbye before I carry on with what’s happening in Belgium.

The manager also said that the best seats in the house are available to you and your family whenever you want to come back to Anfield in the future. Will you be taking him up on that offer?

Yeah, if I can! Of course I’m going to be playing football as long as I can but if there is a chance to come over and watch a game I’ll definitely be there. My schedule will be filled as much as the guys here, but at the same time I would love to see a game at Anfield, I’d love to see a big match in the Premier League here.

Was the move to Brugge just too good an opportunity to turn down - the chance to be No.1 at one of Belgium’s biggest clubs and play Champions League football?

Well over the last few years now I always thought and said that I want to be playing again, that I want to be back on the pitch. They were the team that wanted me the most, that pushed the most to come and get me. Like yesterday, I played the game and although it was a European first leg so you can’t really say it’s already won, I was on the pitch and kept a clean sheet. We won 1-0 and the feeling afterwards, that’s what I wanted again. That’s why we are football players, to have that feeling again [and] to be not only important in the dressing room and being professional and pushing the lads on - I wanted to be important again on the pitch and that’s the opportunity I’ve got now, and that’s why I grasped it with my two hands.

And there’s a possibility that you could play at Anfield again this season if Brugge make it through to the Champions League group stages, too…

I just said that to the boss! That would be nice. Of course in the first instance we have to qualify for the Champions League still and we’re not going to think about that yet, but there’s a chance that we’re going to feature against Liverpool. That would be nice of course, not only to say hello again to teammates and staff but also to the fans. That would be a really nice reception at Anfield, I’m pretty sure of that, and there has been great games in the past between Club Brugge and Liverpool, so it would be nice to see that fixture again.

You wrote in your farewell letter on social media that this Liverpool squad is the best you’ve ever been part of. What do you think the team can achieve this season and beyond?

Because they won last year the Champions League, I think the experience of winning a trophy can only push them forward, make them even more hungry to win the next one and be eager to win the next one. I think that’s what we saw in the Community Shield as well - we went behind but we were hungry to come back. Unfortunately in the penalties, which is always a lottery to see who is going to win, it didn’t work out, but I think if the team are in a situation where they can fight for a trophy they will be ready for it. With the quality inside this dressing room, I don’t think you have to be afraid. You have to challenge for every single thing – Premier League, League Cup, FA Cup and, of course, in Europe – and I’m sure they will do that.

Will you be watching and supporting Liverpool from afar?

Yeah, I’ve always done that with my old teams. Sunderland and Sint-Truiden as well, I still follow the results on a weekly basis. I just have a look and see how they did, what the score was, and the Premier League I will always follow and will give a special vibe to my ex-teammates. 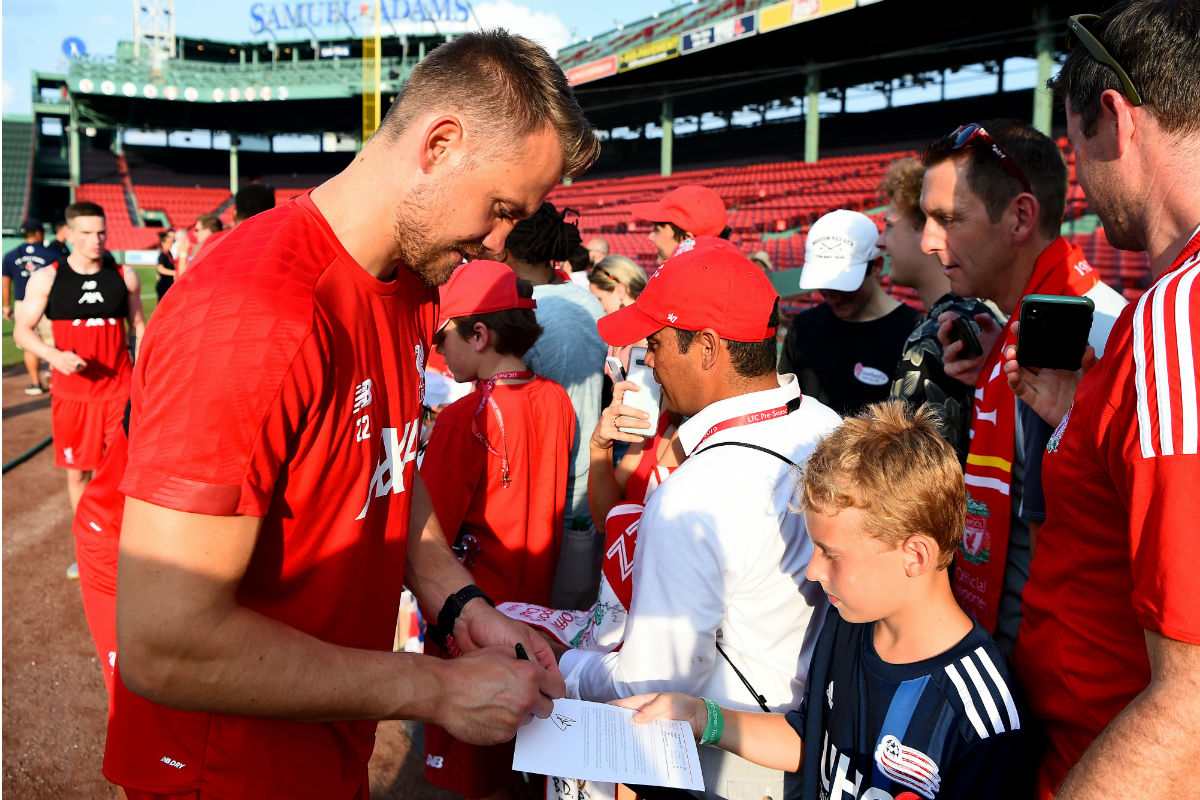 What does Liverpool Football Club mean to you?

What it means to me is that it’s a big family. It’s a big club in the world, the biggest thing that always struck me the most is when you go abroad and see how the club is being followed. Not only with the performances on the pitch but also the connection around it, the support it gets, the following it gets. I saw that again in America when I was there and that’s really special. I don’t think there is a bigger club in the world than that, where the fans are so passionate about being a Red, about following Liverpool and about treasuring Anfield. I think that’s where Liverpool is very big and it was a big honour to represent this club and I will always treasure that.

Finally, what would you like to say to the fans as a last message?

Just stay who you are, basically! It’s [the message is] fairly easy. I think if they can continue the support that they do at this moment in time and how they have been over the last few years then I’m sure more trophies will follow and the team will only perform better because of that.