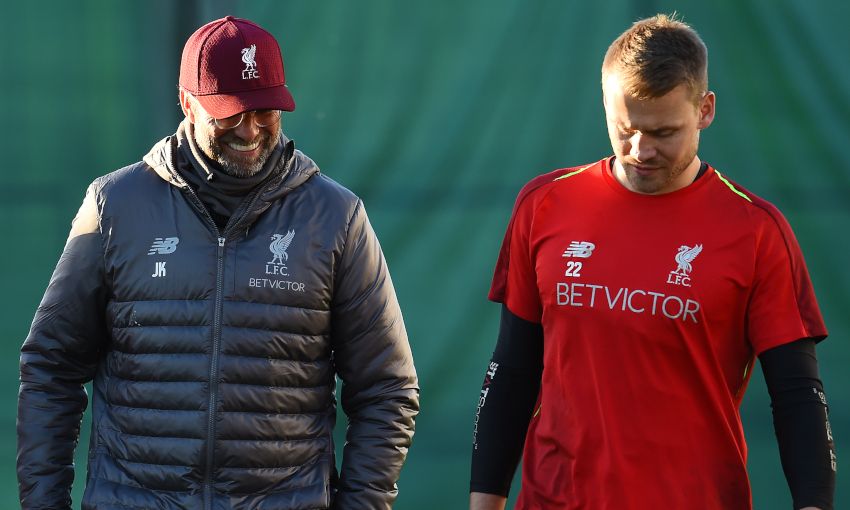 Jürgen Klopp has detailed his gratitude to Simon Mignolet and explained why it was right for Liverpool to allow the goalkeeper to make a permanent move to Club Brugge.

After six years, 204 appearances and a Champions League win with the Reds, the Belgium international today sealed a transfer back to his homeland.

Following the announcement, Klopp heralded Mignolet as one of the finest professionals he has worked with during his lengthy playing and managerial career.

And it was in large part because of the 31-year-old’s attitude that the boss felt it important the club not stand in the way of his opportunity to join Brugge.

“If you were to ask me to write a list of the most standout professionals I’ve worked with in the game – in a career of well over 30 years – Simon Mignolet would be competing for the number one spot,” Klopp told Liverpoolfc.com.

“The respect he commands in our dressing room is unrivalled. An outstanding athlete, an outstanding person, and an international-class ‘keeper.

“The truth is I don’t want Simon to leave – why would I? He’s a ‘keeper good enough to start for all the teams in the Premier League.

“But this is a little like the situation we faced with Lucas Leiva a few seasons ago now. Sometimes you have someone whose contribution to the club means you have to consider their welfare also. Simon is such a person.

“The service he has given this club during his time here means I cannot ignore an opportunity for him that will impact so positively on his future. I think what he has done for LFC means he earns the right to do something that helps him in this moment.

“Brugge are so lucky to have him. The shape he is in – the quality he has – he could play 10 years for this team if both want that.

“I will always be grateful for everything Simon has done for me and the staff while we have been here and I know his teammates will miss him also.

“But we say farewell and good luck with a host of happy memories and we tell him the best seats in the house are available to him and his family whenever they want to come back to Anfield in the future.”