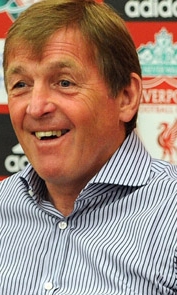 Bet on our Spurs clash with 188BET

After flying into the UK earlier today, Liverpool Chairman Tom Werner spoke exclusively about Kenny Dalglish's appointment and the future for LFC.

Tom, there was much excitement amongst supporters when Kenny Dalglish was confirmed as permanent manager on Thursday. Was there a particular moment when it dawned on you that Kenny was the ideal man for the job?

I think we have been impressed with his leadership skills and his focus since the very beginning. Obviously, when we appointed him as interim manager we hoped he would be successful. Certainly the club is going in the right direction, he's been successful on the pitch but we're just delighted with the collaboration that he has with Damien, with Steve Clarke and with the players. He's just the right man for this job, obviously.

When Kenny was placed in temporary charge back in January, did part of you think then that he may emerge as the front runner for the role?

We hoped so because obviously the understanding that he has for Liverpool is unmatched, not just as a player but just as somebody who understands the Liverpool way. He certainly was the front runner then and he's just been spectacular.

What has impressed you the most about the job he has done so far at the Club?

I think that when we took over we felt the club needed a new sense of direction and Kenny has been able to instil a sense of confidence in the players. Obviously, the results speak for themselves. While we have a lot of work to do he certainly has helped turn this club around this year.

Two of the biggest improvements since Kenny took charge appear to be the style of football and the form of individual players - you must be delighted with both changes?

Absolutely and I would say that Kenny has been such a great motivator. I was talking with one of the players and they all feel, to a man, that there is a greater sense of spirit and unity and Kenny has brought that.

Kenny has proved that he's not scared to involve young players in big matches. How important is it to the Club's footballing strategy that the Club's youngsters are given a chance?

It's critical because I think that one of the issues we felt we all needed to attack when we came in was the average age of the players. You need to bring young players into the system and at least give them an opportunity, and certainly these players have again proved they were worthy of being in the squad.

Have you managed to follow the games from the States and how has Liverpool's transformation been greeted in America?

John and I have been obviously watching every match and what has been so wonderful is that we're scoring goals, we're playing with a sense of confidence. We don't feel that we are at a place where we can rest on any laurels. We haven't made the Champions League but we are certainly going in the right direction and we look forward to the match this Sunday.

The Fulham game on Monday was one of the best games of the season but is there any particular game that stands out for you as a personal favourite since arriving in October?

John and I watched that game together and the reason we liked that game so much is because we scored a goal so quickly and then scored another goal right on top of that. I enjoy those matches a bit more because my heart isn't in my throat!

We haven't spoken to you since Ian Ayre was announced as Managing Director and Damien's new role was revealed. Just how important have those two appointments been?

Very, very important. Both are outstanding executives. We want to bring a sense of unity as we move forward and we all feel, from ownership down to people who are working in this locker room, that there is a sense of direction and that we're all going in the same way. 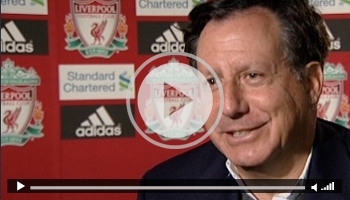 Damien Comolli, Ian Ayre and Kenny all appear to be working very well together - just how important is that relationship between the business and football side of the Club?

I think that the two have to work hand in hand. The more revenues we generate on the business side the stronger the squad can be and the stronger the squad then it allows us to increase our revenues. For example, as you know, we are going to Asia this summer and are going to hopefully increase our exposure as the greatest football team in the world. All these things work hand in hand. Our success on the pitch is the most important thing, obviously, but it feeds on itself and the fact that these three executives, Damien, Ian and Kenny are working so well together - it's great for all of our supporters.

One thing that lots of people connected to the Club have commented on is a renewed sense of stability around the place after a number of years of conflict. Is that something yourself and John identified needed addressed straight away?

I think it's important we continue going in the right direction, but if we're climbing a summit my sense of it is that we're at base camp and have established a sense of stability. We have a long way to go and we certainly don't want to over promise. I think the fans feel a new sense of optimism at the club but we haven't achieved anything yet. We are moving in the right direction and I do feel a sense of unity and I'm confident and optimistic about the future, but we certainly have a long way to go and so part of what my message would be to the fans is to continue to understand and be patient as we move in this direction.

Because Liverpool's form has been so impressive since January and coupled with the appointment of Kenny, is there a danger that expectations about what Liverpool can achieve next season get slightly out of control? Kenny talks about the next game always being the most important - is that a philosophy you share?

I think we want to manage expectations. We have work to do. I was talking to Damien earlier and he obviously has work to do to strengthen the squad this summer and we will not rest until we actually win some championships here. Do I feel we're going in the right direction? Absolutely. I think there's a sense of excitement and certainly there's a great buzz in Liverpool for the match this weekend. It's great to feel that because there is probably no place I'd rather be this Sunday than Anfield.

So  you'd agree that there's still lots of hard work to be done on and off the pitch before anyone connected to LFC starts getting carried away..

Right, but the most important thing in our experience in Boston as executives in the sports industry is it starts with management. I think we have the right management in place, as we have talked about with Ian, Kenny, Steve Clarke, I think we're all delighted we have the right team and I think we feel we're going to make improvements this summer and so I look forward to the future.