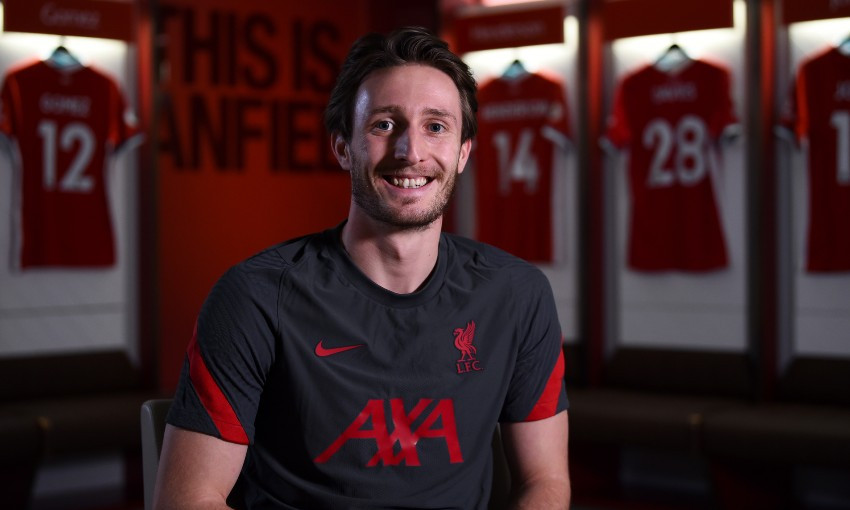 Ben Davies reflected on the 'surreal' feeling of signing for Liverpool while stating his ambition to maximise an unmissable opportunity.

The 25-year-old defender joined the Reds from Preston North End on Monday and, shortly after penning a long-term contract, sat down for an exclusive interview with Liverpoolfc.com.

Watch our first chat with the champions’ new No.28 below - and read on for a full transcript…

Ben, first of all, welcome to Liverpool…

Brilliant, thanks for that. I’m obviously delighted to be here. I’ve been here about 10 minutes and [feel] settled. Everything is incredible.

Can you give us an insight into what’s going on in your head right now? You’re sat here at Anfield, a Liverpool player…

Well, I obviously haven’t got my head around it! It’s happened really fast. There were a few other things that were going on and then all of a sudden this came up and obviously it was an opportunity that I could never turn down. So I went with the go-ahead and now we’re here. It just seems like it’s gone that quick and it’s fantastic.

Hectic, mad! Really good. All well-wishes and just everyone that I’ve known wishing me well and loads of people in Barrow [his hometown] saying: ‘Congratulations and I hope it goes well.’ 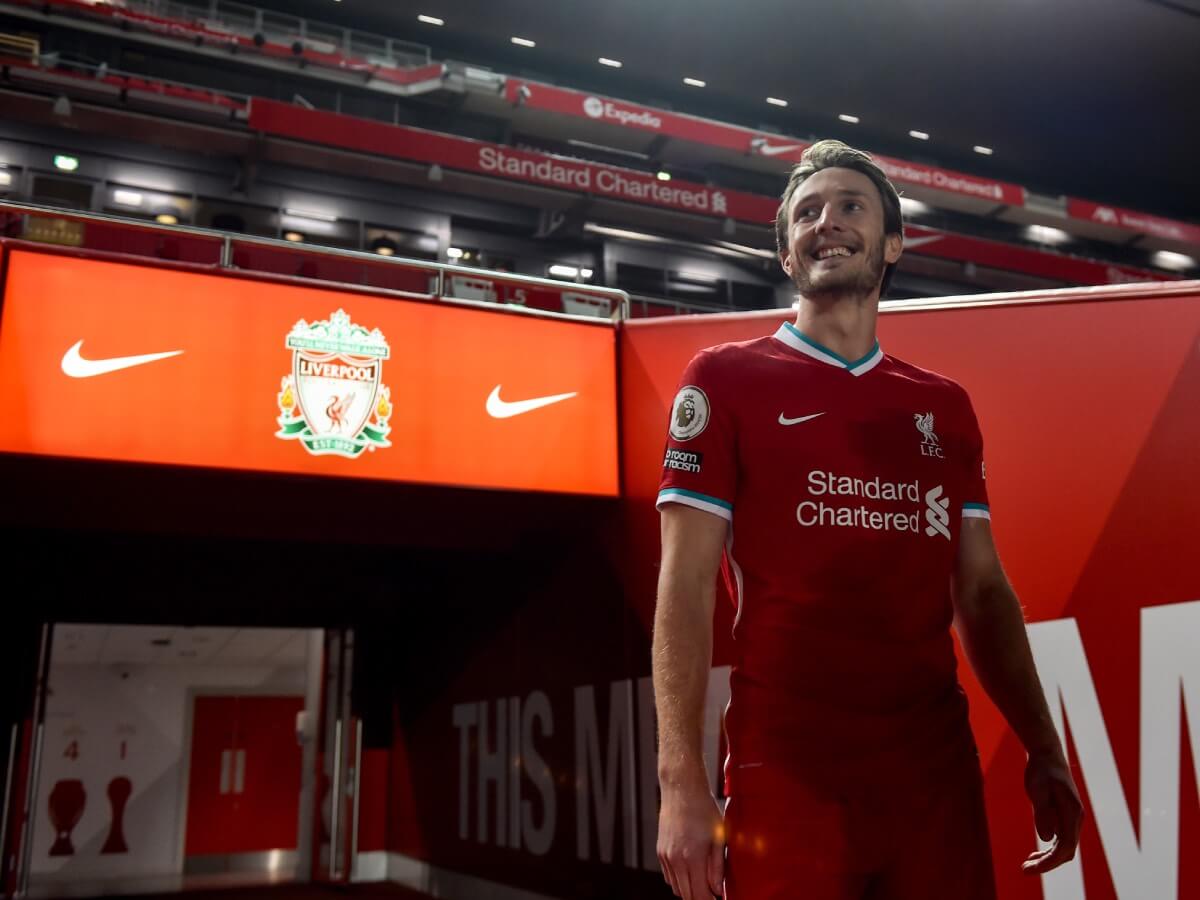 I imagine your phone has been blowing up…

Yeah, I had to turn it off last night because it was too much! I’ve got the missus as my main contact and then turned it off and relaxed because it was every two minutes [that] it was going. It was mental.

Did you manage to get much sleep last night?

I want to say yes, but not really! I was excited really, I just wanted to get it all sorted. I got off at about 1am in the end I think and then I was up early to come and get the medical all done. It’s been tiring.

For the Liverpool fans watching this interview, how would you describe yourself as a player?

I like to pass the ball. I think in the last sort of six months to a year I’ve started bringing it out from the back a lot more, and playing out from the back and carrying the ball forward rather than just passing. I think my game is developing all the time and obviously clean sheets and defending [are important] as well. 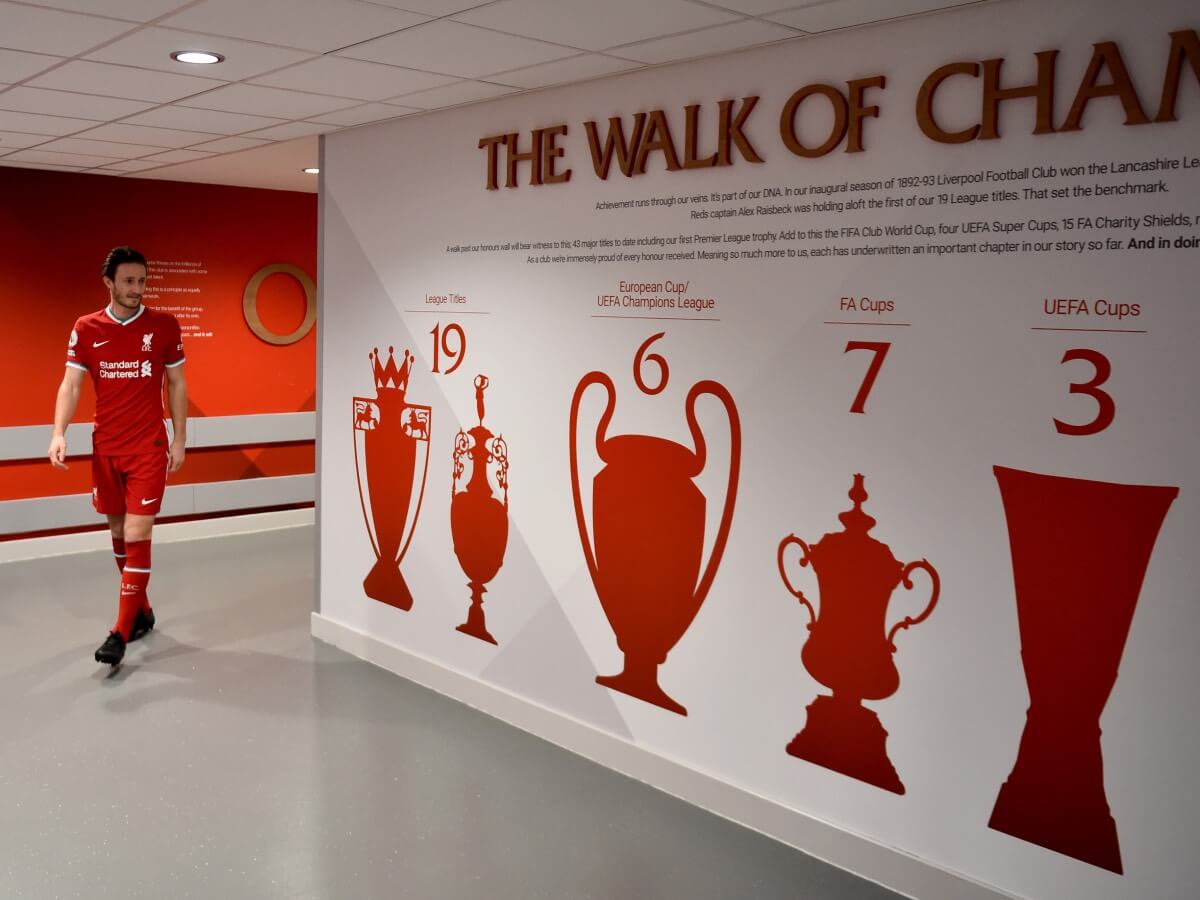 You mentioned ‘developing’ there – you are only 25 so is this an opportunity for you to come to Liverpool and learn from the likes of Virgil van Dijk, Joe Gomez and Joel Matip?

It’s a huge opportunity, yeah. Obviously it came as a bit of a surprise when it first came out but once you start to get your head around it, the opportunity that is in front of me is incredible and I’d be silly to let it wash up or not make the most of it and [I’ll] try to learn off the players you have just mentioned.

Just how highly do you rate someone like Van Dijk?

Top, top! I think most people say he is the best in the world so to have him day-to-day as a teammate is incredible and I’m looking forward to it.

Just how ready do you feel you are for the challenge of stepping up and playing for a club like Liverpool?

I think in the Championship, especially this season, I’ve felt more and more comfortable playing there and I can get through games, not with ease but fairly comfortably and I think now, regardless of where I was going to go, I was going to look to move on to get a new challenge. For it to be here, with the league champions, is obviously a bit surreal at the minute, but it’s something that I’m really going to get my teeth into and look forward to.

When it all settles down a little bit for you and things become a bit more normal, what is your mindset coming here? Is it to compete for a place as soon as possible?

Yeah, 100 per cent. I think a football career is so short and you need to try to be on that pitch as much as you can. So when this door is open, I look to come in and try to get in the first team, play some games and help the team do well. 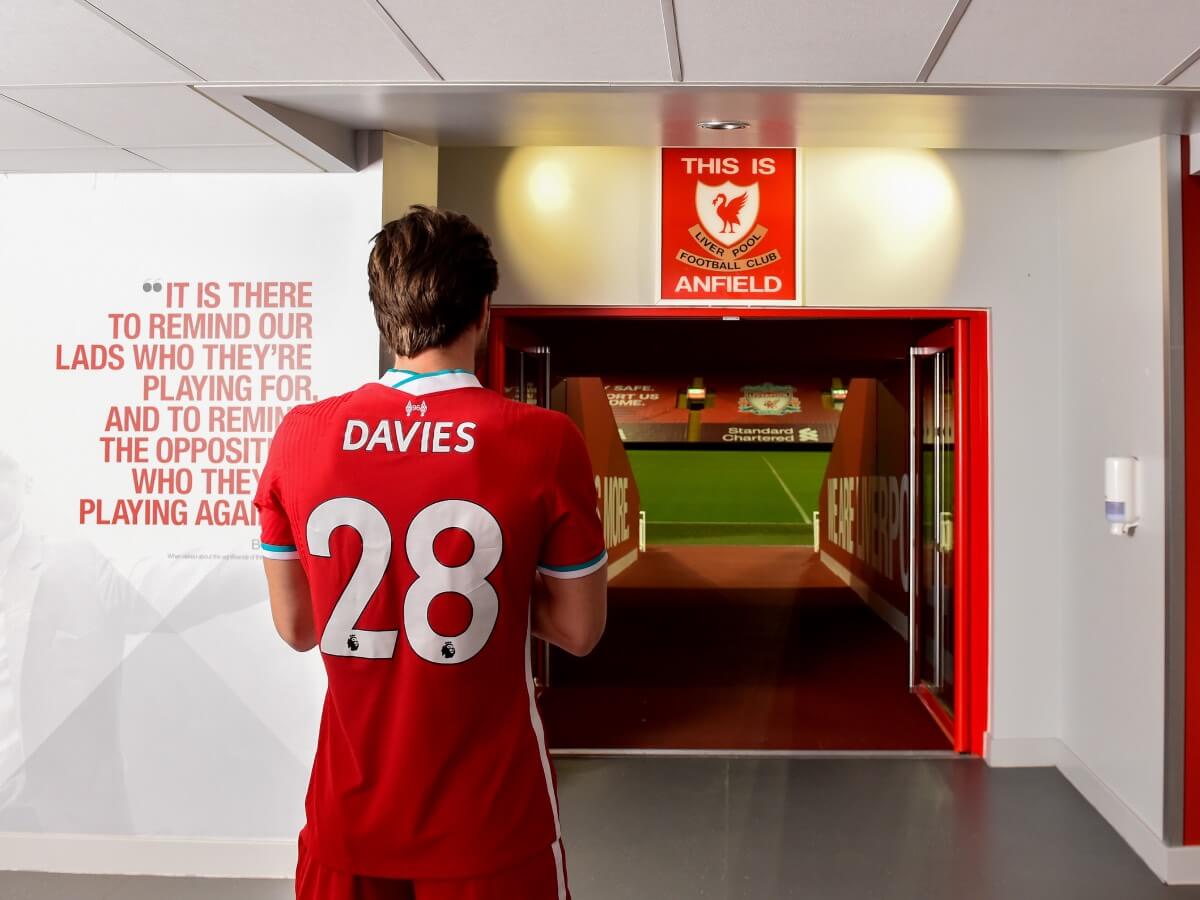 What about the prospect of playing at Anfield and having it as your home stadium?

Incredible. I’ve never actually been to Anfield and I haven’t had a look around yet. I had a quick look out and had a look at the pitch and it looks like carpet, which obviously you’d expect. I haven’t actually walked out of the tunnel yet, so I’m looking forward to that. Just to be in this kind of atmosphere is brilliant.

Did it make it a little bit more real for you when you drove up and there was Anfield?

Yeah, a little bit. As I say, I’ve never been before so I’m keen to have a proper look around and then hopefully over the next sort of week or two weeks it’ll sink in and then become more regular. I don’t want to wish this moment over right now, but at the same time I want to kind of get it out of the way, get in and meet my teammates and move forward.

You actually played against us in a friendly in 2014. What did you remember about that day and would you ever have thought six-and-a-half years later you’d be sitting in this chair having just signed for Liverpool?

It was a long time ago. I’ve got a picture on Instagram of me and, I think, Stewart Downing because I had about 10 minutes when I was about 17 I think. It was brilliant that day, I remember it being a full house. But looking forward, I never thought that it would eventually flip around. Obviously I’m delighted that it has.

Have you had an opportunity to speak to Jürgen Klopp yet?

No, we’re going to go, I believe, to the training ground after this and get in touch with him then.

How much are you looking forward to playing for him?

Immensely. I think his enthusiasm and what he gets out of his players week in, week out – the intensity – is brilliant. It’s kind of one of those things where you just want to be part of it and obviously to have the opportunity is fantastic.

You kind of touched upon it in an earlier answer, but what do you hope to achieve here at Liverpool? What’s the dream?

I want to come in and play games to start with, I want to get my foot in the door and make myself a Premier League player rather than obviously a Championship player. And then take it from there really. I know we’ve got some top players here and players I can certainly learn from. Once you get your foot in the door then you’re here as well. Hopefully I can take my chance and then move forward with it.

What would your message be to Liverpool fans?

Just to be excited really, like I am. I’m looking forward to coming in and playing in front of everyone and showing everyone what I can do. I’m sure a lot of fans and people don’t know [me], or haven’t even seen me play. It’s definitely an exciting time and I think they’ll quite enjoy watching me when I’m playing well. 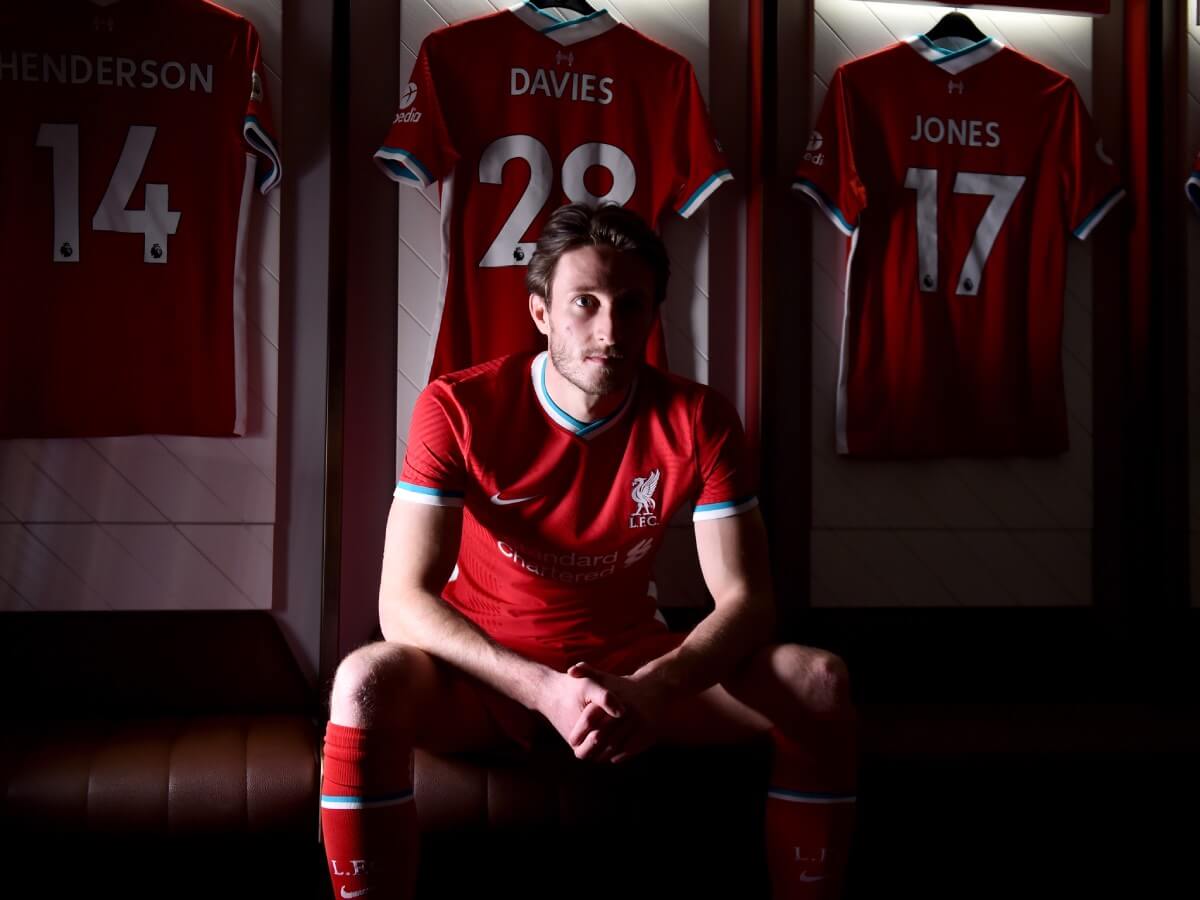 You mentioned earlier about embracing this moment today and allowing yourself to enjoy it – when do you think it will all sink in that you’re a Liverpool player?

It’s a good question! I’m not sure really. I thought it would be maybe today – last night I thought it might be today. Now I’m thinking maybe tomorrow. I think it’s going to be a good week or so, maybe when we’ve had a couple of games and I’ve had a few training sessions with the lads; just a bit of normality really because, as I say, it’s been a bit mental!

How do you think it will feel going into that first training session?

I’m sure once I get there all the lads will be welcoming, I think I’ll feel part of it straight away, to be honest. Once you’re on the football pitch it’s the same whether it’s a training session or a massive league game or cup game or whatever. Once you start playing then you forget about everything. It’s excitement more than anything.

Just finally, a few Liverpool fans want us to ask you this question… whatever happened to the sofa?

[Laughs] Someone bought it! Someone I played with at Southport messaged me and came and picked it up and took it. Got it for a good price!