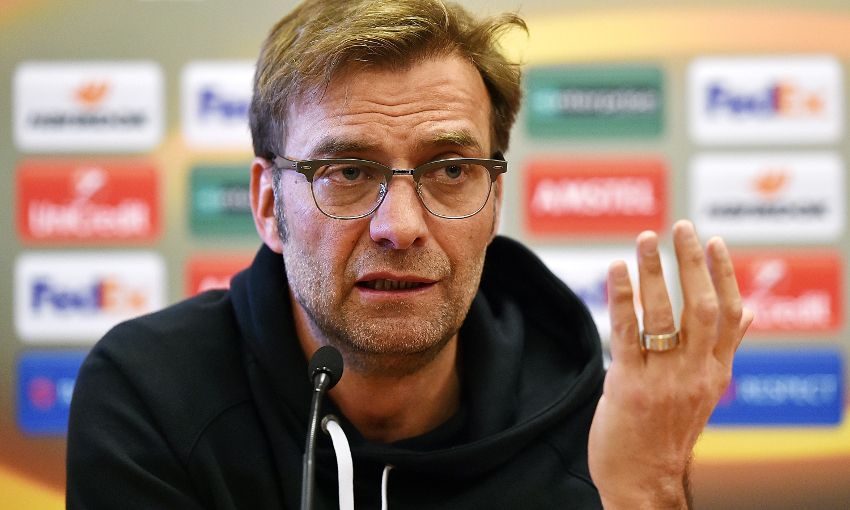 Jürgen Klopp provided an update on Joe Allen, Adam Lallana and Dejan Lovren as he revealed the latest team news ahead of Liverpool's Europa League clash with Augsburg.

The Reds host the Bundesliga side on Thursday night in the second leg of a knockout tie which is goalless on aggregate following the opening meeting in Germany last week.

Klopp and Daniel Sturridge fielded questions from the media at a pre-match press conference today, and the manager explained why the aforementioned trio are currently unavailable.

“Of course, Martin Skrtel is not available and Ingsy and [Joe] Gomez are not available. That’s clear. We have to look at who can play on Thursday then we have two other days to think about the Manchester City game.

“Especially for players who didn’t play for a long time – like Phil [Coutinho] and Daniel – it’s very important to play them for rhythm.

“You saw they are back but it’s not at the consistent highest level. That’s absolutely normal. They could take a rest and we wait for the highest level or work for it; I prefer working for it and that’s what we try to do.”

What the boss will not be doing, however, is allowing Sunday’s Capital One Cup final at Wembley to affect his decision-making when selecting a line-up to face Augsburg.

“It’s pretty easy because life makes the rules,” he added. “If you think about the second step before you make the first step, you will always fall down. So there’s no other chance.

“We have to be fully concentrated and give everything for this game. If we think, for example, to leave this player out then for sure he will be injured in a training session. So it’s not allowed.

“We have to be fully concentrated on this game and then go to the next one. That’s how we select the team. The only other thing we have to think about is who is available?”

Klopp and his squad had a rare break from matches last weekend, with many of the players afforded time off after an intensive run of competitive action in the past few months.

The German said: “Usually we should have used the whole time to train but after this long period without days off, we had to give a lot of players two days off.

“Saturday and Sunday they were off and we started again on Monday. We could train on Monday and Tuesday and tonight completely normally. That’s very important for us.

“We’ve had a little bit of time for recovery and a few sessions for getting better, which is important. That’s what we did. Usually we have one day off in a normal week, we had two days. It is like it is.”