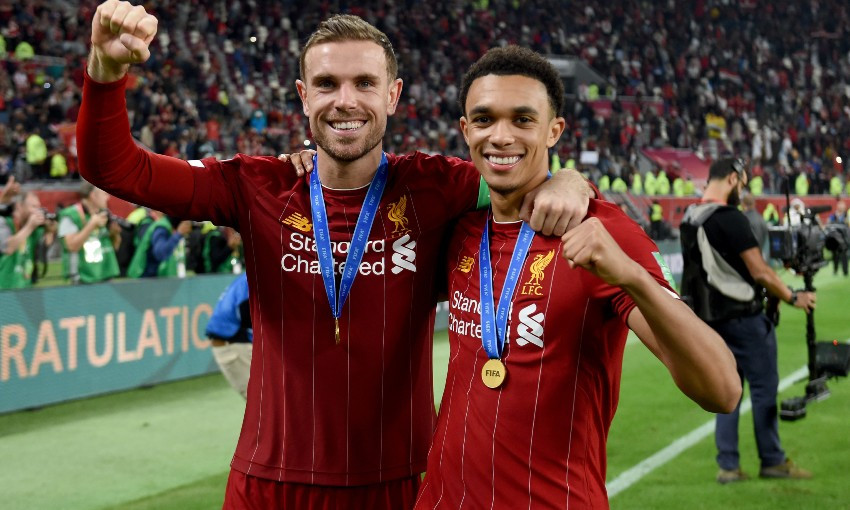 Teammates past and present detail Jordan Henderson's personal and professional qualities on the 10th anniversary of the captain signing for Liverpool.

Trent Alexander-Arnold, James Milner, Virgil van Dijk, Adam Lallana and Jamie Carragher share the esteem in which they hold the skipper during LFCTV’s Henderson: The Making of a Champion documentary, which is now available on demand.

Read a taster of what they say about Henderson below.

“That’s one of his best qualities: knowing when to encourage and knowing when to give it to you and let you know that you need to liven up and wake up. I think many people have heard him over the last year, with no fans there, on the telly and stuff like that!

“He’s very vocal, someone who leads with his actions and words; someone who is a role model, even to this day, for me. Someone who is inspiring, his story is amazing and just to see him grow as a player and a person, and always seeing him do the right things on and off the pitch is really good to be able to see.

“He’s an extremely talented footballer first and foremost but also the engine he’s got on him, the intensity he plays at, the desire he’s got to win and commit to the game and to the team [are his standout qualities on the pitch]. He drags the team through games with his energy and it’s just motivating to see him, the way he is so up for it, never really going through the motions, always 100 per cent committed to everything he does. I think it’s just infectious throughout the team.

“He almost still plays like he’s got a point to prove to people, when I think a lot of people would tell him that he doesn’t. I think that’s what motivates him and he finds that the best way to get the most out of himself. I think he is someone who has found his motivation and uses it. He’s never satisfied with what he’s got. He’s achieved so much, especially as captain of the club, lifted so many memorable trophies for us, but he still wants more and he still pushes us to get more.” 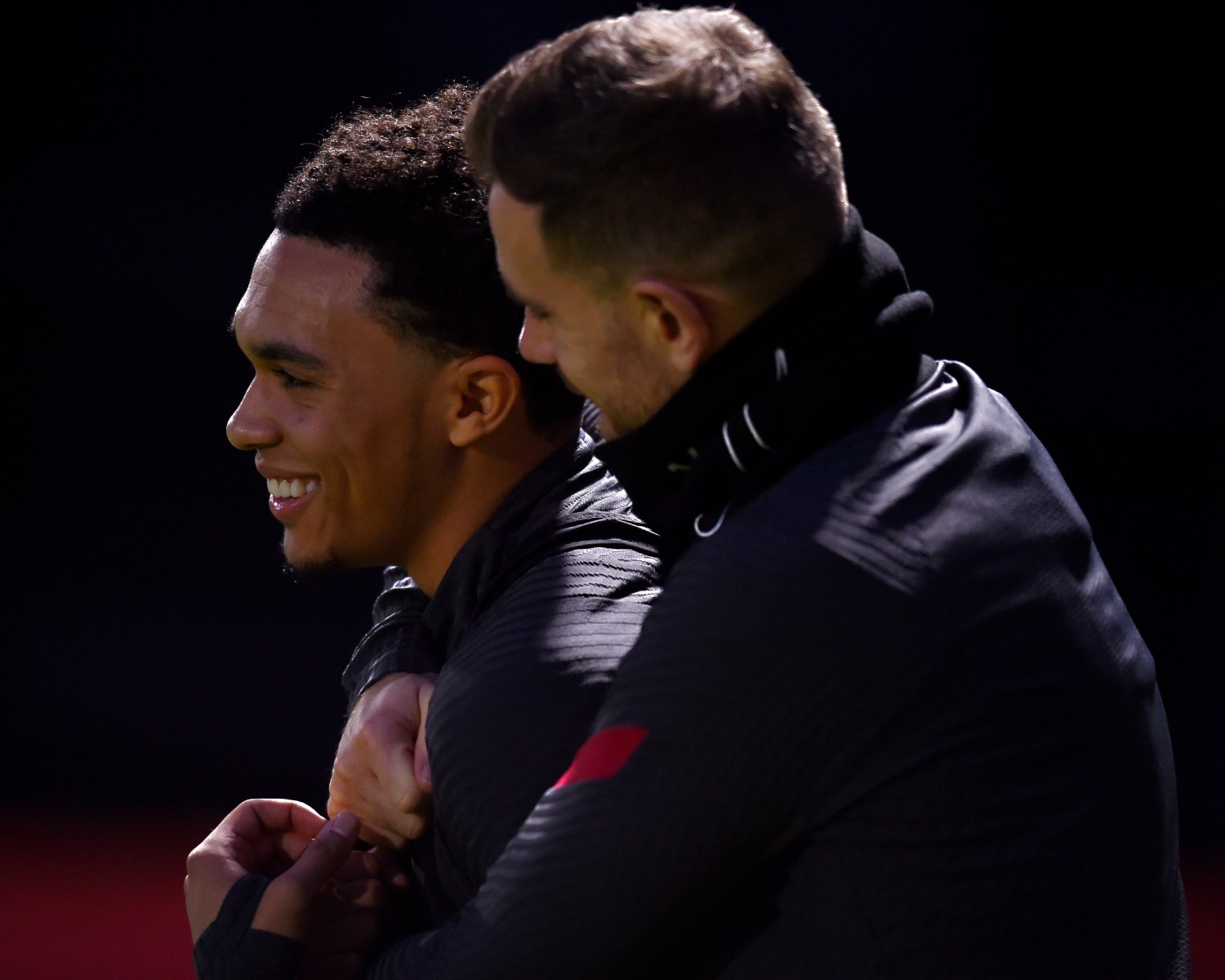 “He was asking someone else to lift the trophy with him [in Madrid in 2019] and it was like: ‘No Hendo, this is your moment and you’ve earned the right, you deserve the right to go along with the other captains who have done it and go down in history for this club.’

“That sums him up right there, wanting to share that moment. It’s all our moment, him lifting the trophy, but every single player would have wanted him to lift it and lift it on his own. I think my words were something like: ‘If someone else lifts it with you I’ll rugby tackle them off the stage!’

“That again shows his selflessness. He’s always thinking about other people before himself but he’s our leader. There wasn’t a change in how he acted after that, it’s not like he was any different before that, but you could just see that he was more comfortable in that role I suppose.

“I think other people stood up and took notice of what he brought to the team as well. Obviously he had his ups and downs at the club before that. Like every footballer he had hard times and stepping into Stevie’s shoes is no easy task at all. So, the way he’s done it, the manner he’s done it, the way he’s led the club: I can’t say enough good things about him.” 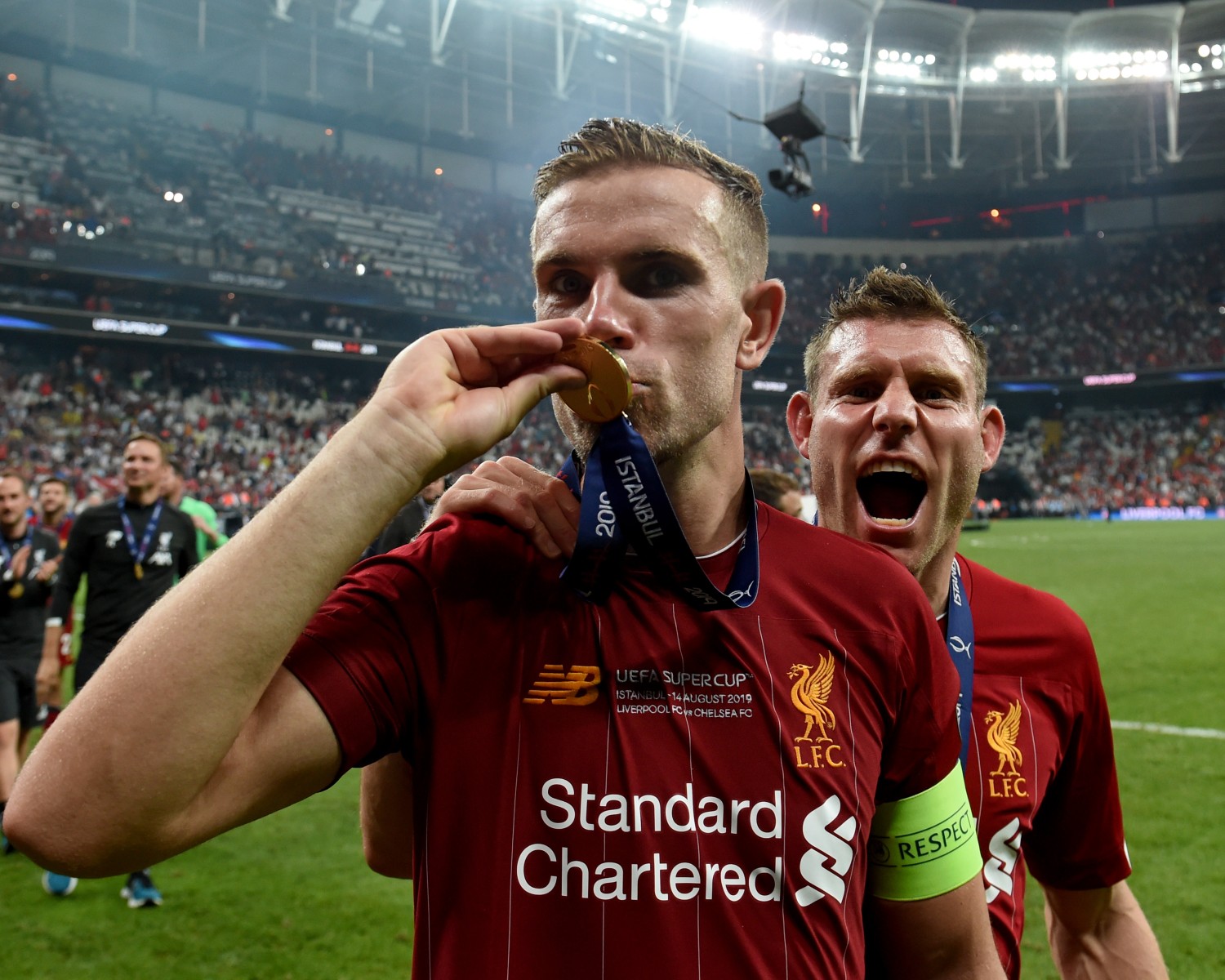 “Jordan is a great guy, a good human being, a fantastic player, a great captain for the club, a leader. [I have] only positive and good words for him. I had a good relationship with him [before signing for Liverpool]. We were sharing the same agent before I joined the club so we were already in contact then and it helped me a lot to make the decision to come to the club as well, so big credit to him! He is a humble guy, works hard every day. I am just happy for the achievements he has had so far in his career. I am just happy that he is my captain as well.

“Being a captain, especially for Liverpool, is a big job, and he is doing it fantastically I think. There are so many things that people don’t see that happen outside the cameras and outside the pitch to be organised and to be done by the captain, and he’s doing it perfectly. Not only for us as a team but if you look at the last two years, for example, during the whole pandemic how much influence he has on the league and how he went about it. It’s only big credit to him and the way he is personally, how kind-hearted he is as well. He wants to look after each other, not only to us as Liverpool, but for the rest of the teams. That’s why he is also one of the captains of the England squad I think.” 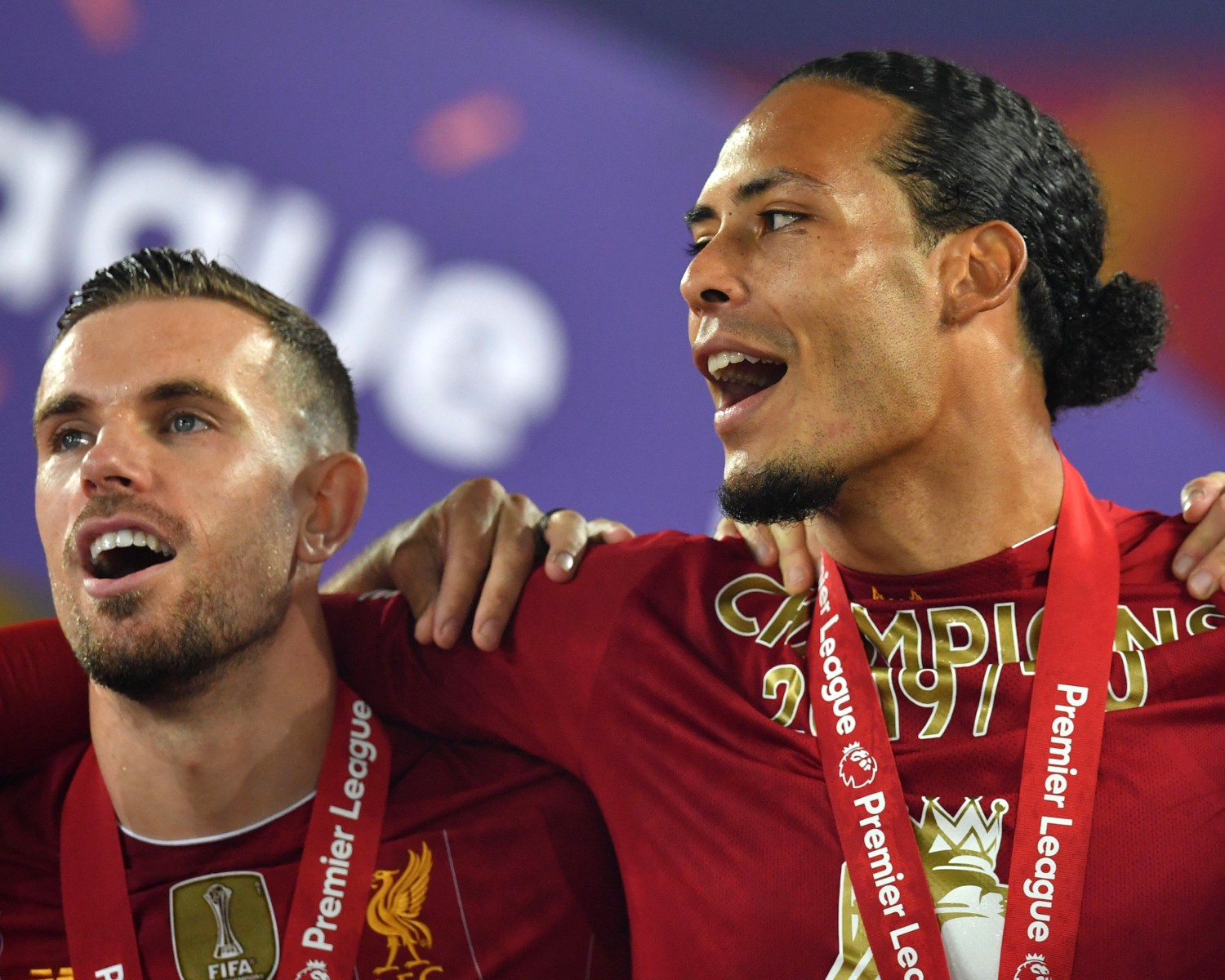 “He’s always been the most ultimate professional. The first glimpse I got of that was when I played with him at England and then when I signed for Liverpool you could just see it day in, day out. Always sacrificed himself for the team, always had those leadership qualities.

“He’s a family man. Loves the simple things in life, loves his jellies and his sweets!

“There’s definitely layers to Jordan. When I joined Liverpool he didn’t speak to me for the first two or three months! He hates me saying that but it’s true! But gradually, you peel back the layers and you’ve got a humorous lad that loves banter, but loves the quiet, simple life.

“We’ve got a great relationship now, our friends and families are very, very close. He’s probably my best friend and I know the wives are best friends and the kids were very close and went to the same school. So we’ve created a unique and a special friendship that will last forever.

“He speaks when he’s spoken to, doesn’t often embark in conversation. But I think the more you dig, you get him to open up and express himself. But he’s forever putting other people first: that’s why he is the best captain I’ve ever played for and that’s why he has won all the awards that he has, personally and as a team.” 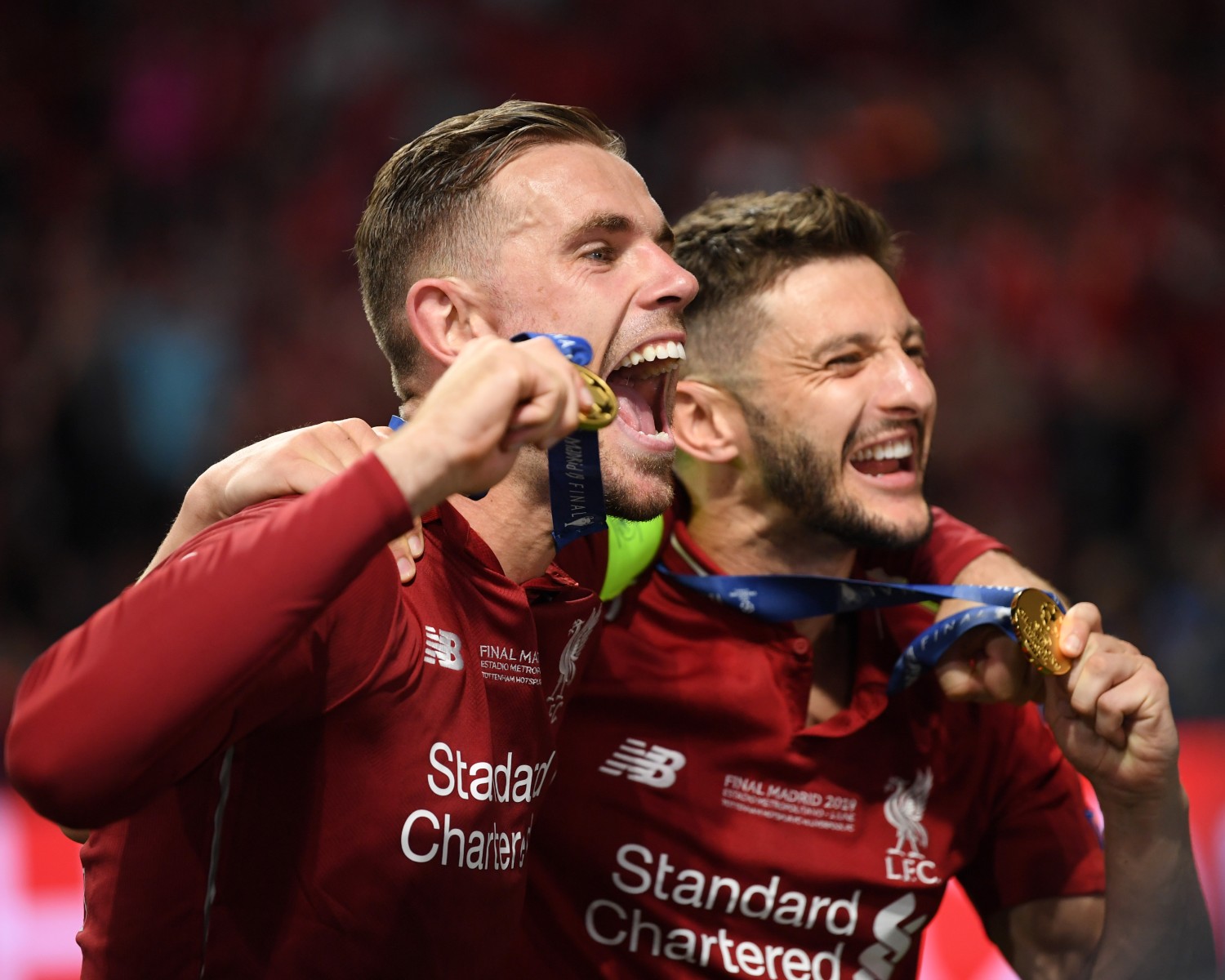 “He’s a great leader. Sometimes that’s [shown in] things we see off the pitch and you see how Jordan has reacted in the last 12 months in the pandemic, his role within the NHS and getting the captains together. He’s always had great leadership qualities.

“To be a great captain [of Liverpool], you’ve got to lift trophies. That [the Champions League win] was an iconic moment and the ‘Hendo shuffle’ is now infamous around the world, certainly on the back of winning that European Cup! That is a great example to every young kid up and down this country, what Jordan Henderson has achieved. He’s a massive role model, not just for Liverpool supporters and young kids around here, but everyone in this country.” 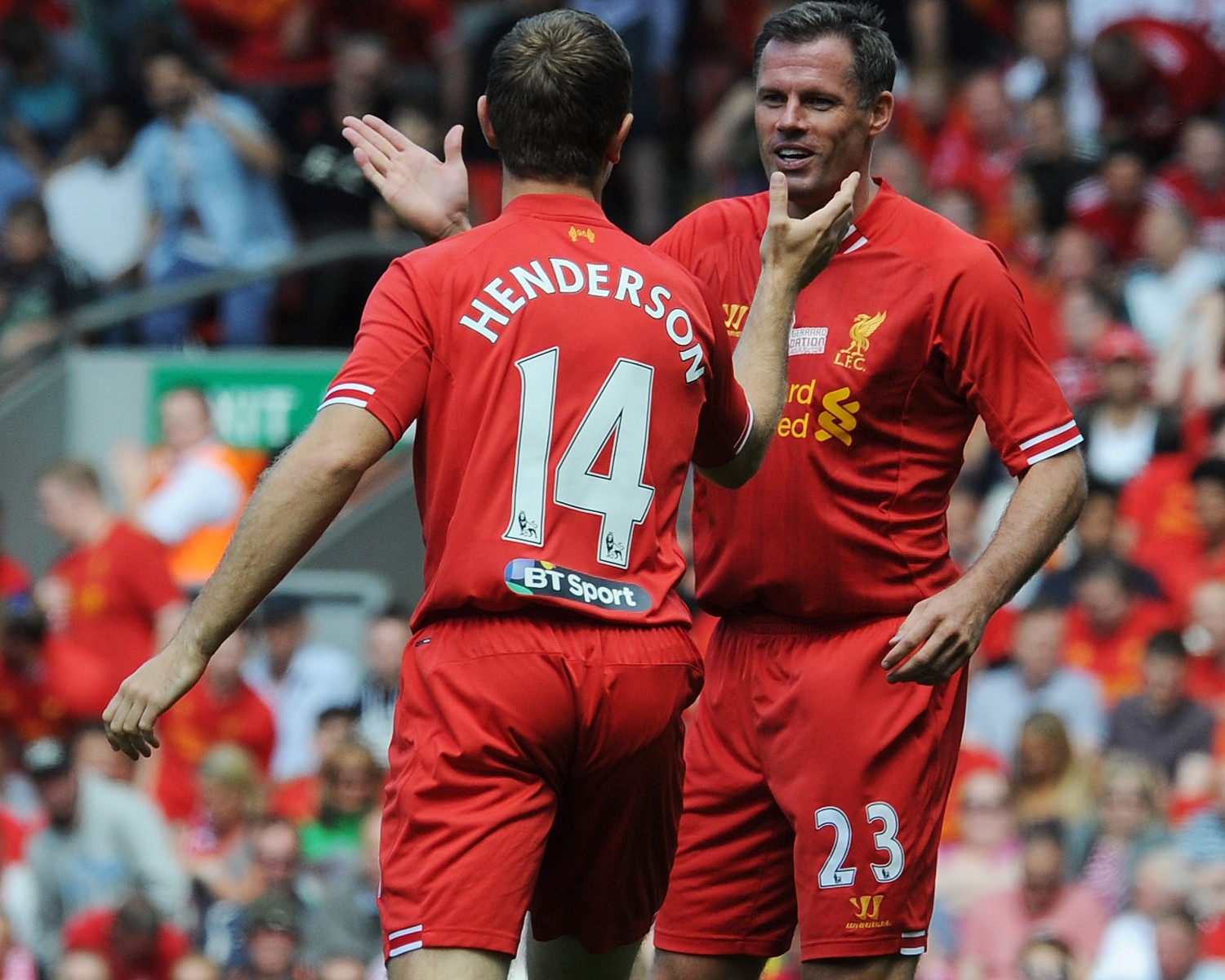