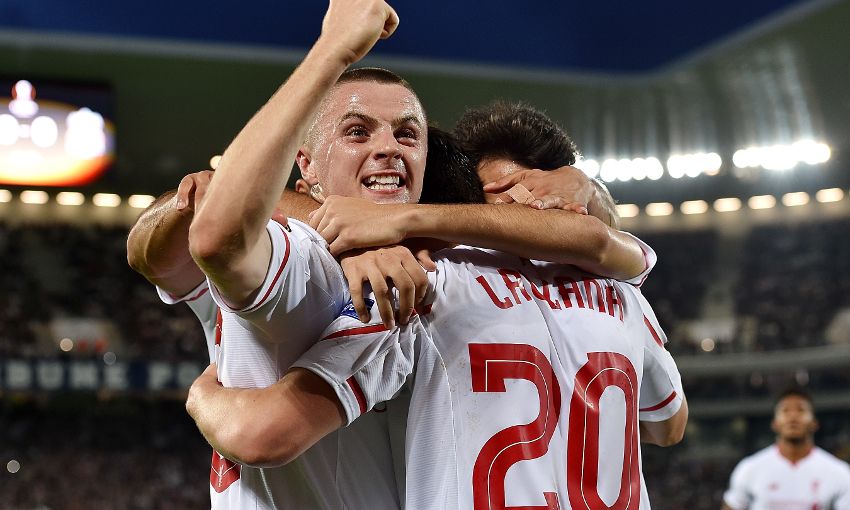 Gary McAllister discussed a variety of subjects as he previewed Liverpool's Capital One Cup tie with Carlisle United – read on for his take on aiming to win the competition, the team's form and the progress of Jordan Rossiter.

Now you’re back here, how is the new management team coming together? Results haven’t been quite what you would want of late – what pressure has that brought?

There’s always pressure when results don’t go well at a club like Liverpool, but we’re getting to know each other and day-by-day it gets better and better. The dynamic is becoming closer. Certainly, when the heat is on, you tend to close up even closer. As far as I can see it, it’s working well and I’m enjoying it.

You’ve got good memories of this competition here at Liverpool, part of the 2001 side that won the treble and this was the first trophy…

That was the start and in the early rounds of it, you gather momentum and then there’s greater belief. It led onto a really good season. We’ll give the competition the respect it deserves, we’ll be strong tomorrow night and we want to win, we want to try to go as far as we can in the tournament. We had a good run in it last season, can we go one further?

Do you feel the club needs something like that at the moment?

That’s what I associate Liverpool with – trying to win things. We’re in four competitions and we’re in to try to do well in all four.

Brendan has highlighted this run of games as a time of the season when the whole squad can come into play. Can we expect changes for this game?

There will be changes but it will be strong, it’ll still be a very strong side. We’ve got a strong squad. As Brendan has mentioned, in the early games in the season when they just come weekend to weekend, it was nearly a fixed side. But obviously when there’s League Cup, Europa League and league matches, you’ve got to utilise the players that you’ve got. But we’ve got to get some momentum going as well, so you want some stability in the shape and the style, so it will be similar to the weekend.

Is a cup run an opportunity to pick up some form that can translate to the league as well?

Yes and on the back of us having some home games on the bounce as well, we need something to give the fans to shout about. So it’s ideal to get a little run going.

In saying that, we’ve done preparation on Carlisle like we do against any team. They were impressive at QPR – they went there and got a result. It wasn’t off the back of defending. They try to play an open game, so they’ll try to come here and be expansive and pass the ball. There might be a few goals.

You know the expectations having been at the club as a player. How do you think the current squad are dealing with the situation as it is now?

There is still four or five who are learning the expectation level. Right the way back when I arrived here, I thought I knew about Liverpool and how big it was and what the expectation level was. But it’s when you actually get inside the building when you realise. It’s not changed since the days I played here; a couple of poor results and the heat is on, you’re under the microscope. But players have got to thrive under that sort of pressure, that’s the thing that drives you – grow and be able to cope with that, cope with the demands of playing here.

It wasn’t a bad performance at the weekend – do you think the message is that you shouldn’t panic at the moment?

Absolutely. We’ve only played six league games. I thought there were loads of good things at the weekend. The disappointing thing was that we didn’t get three points. But we got the ball into good areas wide, we got balls in the box, we created chances, I thought we passed it as good as we have done this season. There was a bit of rhythm to the game and it’s just about building on top of that.

The next three games are at home. How important is it to make that advantage count?

You mentioned there will be some changes. Does Origi get another opportunity?

I’m not going to give you the team but he’s going to be in and around it. He’s obviously going to get opportunities, there’s games coming up and a game tomorrow. We’ve got one striker with a slight injury at the moment. Divock will come into the thinking.

Is the standard in the lower divisions now getting better? We have seen teams in recent years come to places like Liverpool and really put you under pressure…

Everything has upped. The tactical awareness is better now and players are generally fitter in the lower divisions, the organisation is most definitely there. We’re fully aware it won’t be easy. They’re not going to come here and roll over. There’s going to be a battle to be won before we actually try to impress our tactic on them. The players are fully aware of that. They’ve had a really good result at QPR, so they’re capable and they’re scoring goals in their division as well. They have got a couple of experienced guys – [Derek] Asamoah and [Jabo] Ibehre up front have been around a while now so they know their way around a football pitch. It will be tough but we’re aware of that.

So the attitude has to be spot on?

Absolutely. Then we’ve got to impress our Premier League abilities on them.

Have you been impressed by the strides taken by Jordan Rossiter?

I’m a big fan. It’s always important that the fans here have got a local lad to have that sort of association. He brings that. He’s tenacious and he’s another one who is listening, he wants to listen and learn. There’s not a minute of the day that he’s not on the training ground looking to work on little bits of movement in the middle of the park and his passing. It’s encouraging. He’s a player that all the coaching staff are happy with.

You were around a squad 15 years ago that had some local superstars coming through. Do you see some characteristics that bode really well for him?