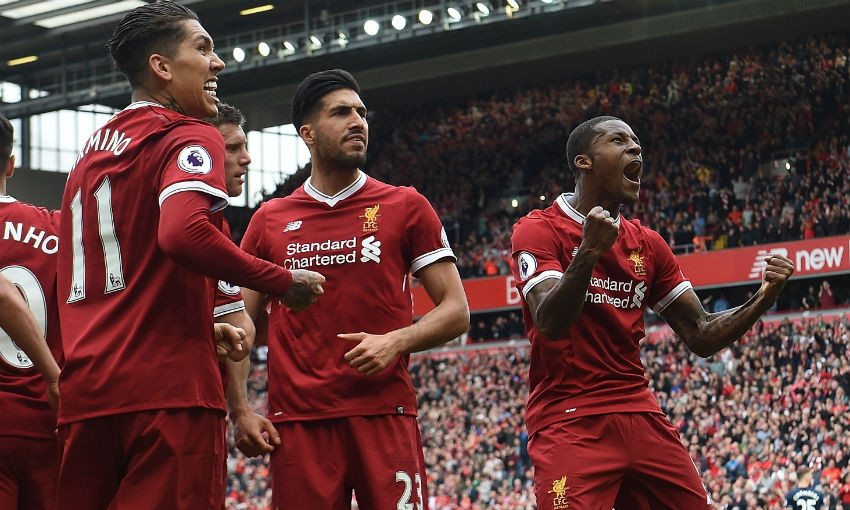 He’s just slammed his team into the lead and, in doing so, has released Anfield’s pressure valve.

Liverpool have scored against Middlesbrough and are en route to confirming qualification for the play-off round of the Champions League.

Their visitors that day - May 21, 2017 - were eventually beaten 3-0 as Philippe Coutinho and Adam Lallana added to Wijnaldum’s unerring, near-post finish at the Kop end in first-half stoppage time.

“We knew that we had to win to qualify for the Champions League, so we saw it as a final,” the Dutchman recalls in conversation with Liverpoolfc.com.

“It was different from all the other games because we knew that we had to win to qualify for the play-offs of the Champions League.”

To contextualise, Jürgen Klopp’s side faced a simple equation on the final day of the 2016-17 Premier League season: win and be sure of finishing fourth. Win, and be sure of giving themselves the opportunity to re-establish the club among Europe’s elite.

Anything less, however, and their fate would rest in Arsenal’s hands. Should Arsene Wenger’s men conclude the campaign with victory while Boro claimed a point or all three in L4, they would snatch fourth spot.

Given the stakes it was perhaps understandable, then, that there was a sense of anxiety inside Anfield as the game got going; an emotional state that was reinforced as word got around the stands that the Gunners had indeed gone ahead early on against Everton.

Until, that was, Wijnaldum collected Roberto Firmino’s pass and blasted a fierce drive beyond Brad Guzan.

#Throwback to one of my favourite goals for @liverpoolfc 🙌🏾⚽️ This game sealed our @championsleague spot for the next season and two wild European campaigns followed. What’s your favourite moment from this game? #ThrowbackThursday

“Yeah, it was tense!” the goalscorer says.

“I don’t know if we created really big chances to score a goal so that also gave the team a little bit of a thing to be nervous [about], but when we scored the goal it looked like things just fell off our shoulders and we didn’t have the heavy [weight] anymore.

“There was already pressure before we went into that game and the longer the game went without us scoring a goal, the more the pressure was going up and up and up and finally there was the moment. I don’t know which minute it was but I think it was at the end of the first half, when I scored the goal, and that then helped a lot.

“The fans give you an even better feeling so it was a really good thing because if we didn’t score you might go in like… we had to score the goal to get confidence, not to get even more nervous and then you also have the supporters who might be nervous because we didn’t score the goal in the first half, because we are used to scoring a lot of goals at Anfield, especially in the first half.

“So yeah, the goal came at the right time.”

Back-to-back Champions League finals would follow, of course, and Wijnaldum believes clearing that last-day hurdle represented the culmination of the developmental progress made during his first campaign as a Liverpool player.

“I think that season we had already showed that we can handle big games,” the midfielder states.

“Against the top six we didn’t lose a game that season so we already showed it but at that time we were not that consistent with everything so that was a little bit difficult, but we knew that it would help us if we qualified for the Champions League, that we would develop more because you play against the best teams in Europe.

“I think in the season there were so many situations that we had to deal with and we did it quite well.

“I’m not the kind of person who would say that because of that goal we reached what we have now because I think before that goal, we also had games where we might be behind and we still scored a goal to win or equalise that gave us the opportunity, me the opportunity, to score that goal at that moment against Middlesbrough.

“So I am more a person who looks at the whole package instead of one little thing because before that situation where I scored the goal, there are many situations that helped to put us in that situation.

“Of course this is one of them but I think in those cases, there are a lot of important moments.”