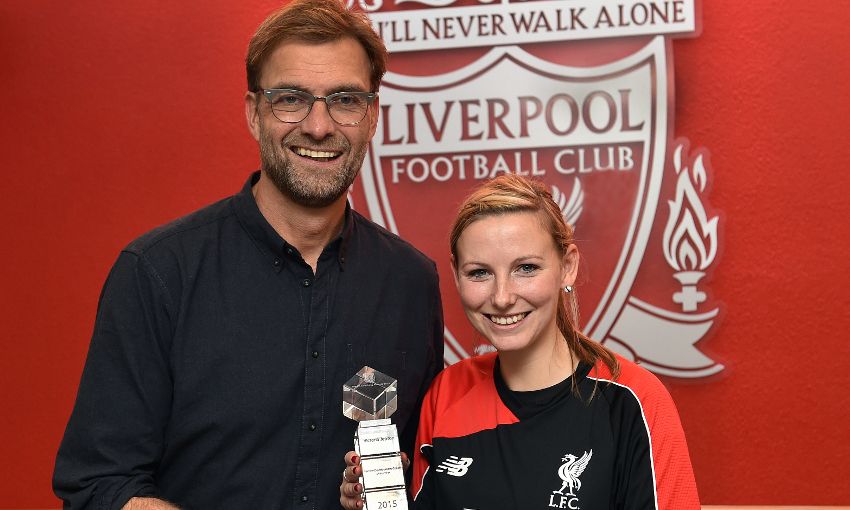 Chatting tactics over coffee with Jürgen Klopp in his Melwood office, coaching yougsters in the Liverpool Way in the United States, winning a national award and being employed by the England national team set-up. That's the story of an incredible 12 months for Vicky Jepson.

There are 168 hours in a week and in each and every one, Vicky somehow has to cram in three different and varying roles at Liverpool Football Club. That’s not to mention working with the FA girls excellence camps, which is the first step into the England talent pathway – a vocation that was added to an already lengthy list of responsibilities in August.

Still, it’s a labour of sheer love for the Macclesfield native.

Having joined the club in 2009, she currently works for the LFC Foundation on a day-to-day basis, running the Premier League-funded women and girls’ project. In addition, evenings and weekends are spent with Liverpool Ladies, managing the development squad and working at the girls’ centre of excellence.

It’s not a complaint, however. Anything but.

Given Vicky’s renowned and extraordinary dedication to the women’s game in the United Kingdom, it was no surprise to see her awarded the prestigious FA Female Development Coach of the Year in December of last year, having been nominated for the same accolade 12 months earlier.

And it was winning that honour that led to a managerial chat with Klopp in his office at the first team’s training base in West Derby.

“I’ll be really honest, it was the second year I’d been nominated for the award and you don’t get nominated for something as big as that - a national award - twice, do you?

“When I got the email, I was a little bit like ‘Are you sure?’ so I emailed them back saying I wasn’t sure if it was correct, but they said I’d been nominated again so I was thinking, ‘Brilliant, I can take my dad out for another Christmas party and a few drinks!’ 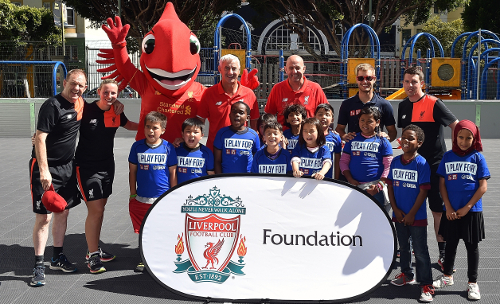 “When we got there and I actually won the award, I froze. I didn’t know I had won beforehand, especially as there were other people sat around the table that had been nominated for it. I just froze. It was really, really overwhelming to be recognised nationally for such a fantastic achievement.

“After getting over that and coming into work, Forbes [Duff] at the Foundation said they had a little treat for me and to head over to Melwood. I thought, ‘Fantastic, I’m going to watch the first team train’ and it’d be a chance for me to observe the kind of things they do during sessions.

“But that’s when I got to meet Klopp and he asked me to sit down and have a chat with him in his office, it was an experience that I’ll never forget, it’s something you just couldn’t wish for.

“He was really interested in my coaching background and why I was involved in the game. We were sharing stories from our experiences in the game and coaching.

“It was incredible to get such respect from someone as renowned and highly-regarded in the game as Jürgen. For the first-team gaffer to want you to sit down in his office - amazing.”

"I know it's cliché, but it was like one big family on tour."

Seven months on from that meeting with the boss, Vicky was part of the Liverpool travelling party that embarked on a pre-season tour of the United States in July.

Her remit was to work with the LFC Foundation and deliver coaching clinics out on the West Coast on a daily basis during the Reds’ near-two-week stay across the Atlantic.

“Going on the tour was fantastic, especially as I never thought I’d be selected to go,” she recalls. “This was the first year a female Foundation coach had gone and it was the best experience ever.

“I know it’s cliché and cheesy when people say the club is like one big family, but I actually felt that when I was on tour. Everybody had time for you and was interested in the work you were doing out there.

“As a coach, it was great to be pitchside watching the first team train and then - and much more importantly - be out in the community spreading the word of the club. It was brilliant.

“It was a lot of hard work, though. Your body clock is going against you, but we were up, getting kit ready and pumping balls up for the day at 7am, loading up the truck, going to the next session and it was tough going. Then you’re doing the same again the next day.

“But you’re all there, getting through it together and it was incredibly fulfilling.”

With three varying roles with three very different groups of people, Vicky naturally has to try to modify her coaching approach to suit the needs of each workout.

“Your approach has to change for each role,” she continues. “You’re working with recreational players, some of whom have behavioural difficulties. Then you’re working with youngsters that are just starting off in elite football.

“Then you’re working with 16 to 21-year-olds that are really pushing and want to be in the first team. They have different challenges so you have to understand the challenges they’re up against and have empathy with them, to try to drive the best out of them.

“It’s different with each individual. You’ve got to understand them. It’s the same with a squad - if you’ve got a squad of 21/22 players, you’ve got to understand every single one because some players you can get at, some need an arm round the shoulder, some need one-to-ones, some can be addressed in groups… it’s the same with my sessions, every one has to be tailored to get outcomes.”

"Watching development and progress - what's more rewarding than that?"

‘Rewarding’ is a phrase Vicky uses often during our chat at the club’s city centre offices.

It’s a Monday afternoon and having spent the previous day hill running with LFC Ladies’ development squad, her time with Liverpoolfc.com on another packed-out day is sandwiched between coaching with the LFC Foundation and an evening training session with the Ladies youngsters.

So what keeps her going throughout such an incredibly demanding schedule?

“The key things for me, the rewards, are seeing players progress,” she states. “If we look at the community section, getting people off the streets and engaging them into what I believe is such a great sport is fantastic.

“We’ve had a few stories where girls have come off the streets in Anfield and other areas - St Helens, Runcorn, wherever it may be at our satellite sessions - and become engrossed in the sport. They were natural athletes anyway, but didn’t know where to go to be belonged and attached to. They’ve come into our centre through the Foundation and because they were so talented and striving, we gave them the exit route to go and trial at our centre of excellence.

“There is one girl now with the England U15s that started off playing football at one of our sessions in St Helens - she came to our satellite sessions and progressed via that pathway. 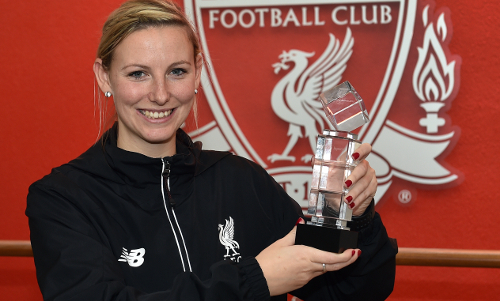 “Then, in the Ladies section, when you see some of your young players progressing through our centre of excellence programme into the development squad and then into WSL football like Niamh Charles and Maz Pacheco, you’re like a proud mum on the sidelines watching them.

“I have high hopes and I’m sure there will be many more to come from this year's development squad to progress into the first team if they keep up their hard work and dedication to progress and develop.

“I put my players through tough times all the time. They were hill running on Sunday and then tonight at training, they’re probably not going to be able to walk, but I’ll expect them to train.

“I personally know the journey they go through, so every weekend I always want them to get results as they deserve it with the work they put in. And when you watch them develop and progress, for me, I don’t think there is anything more rewarding than that.”