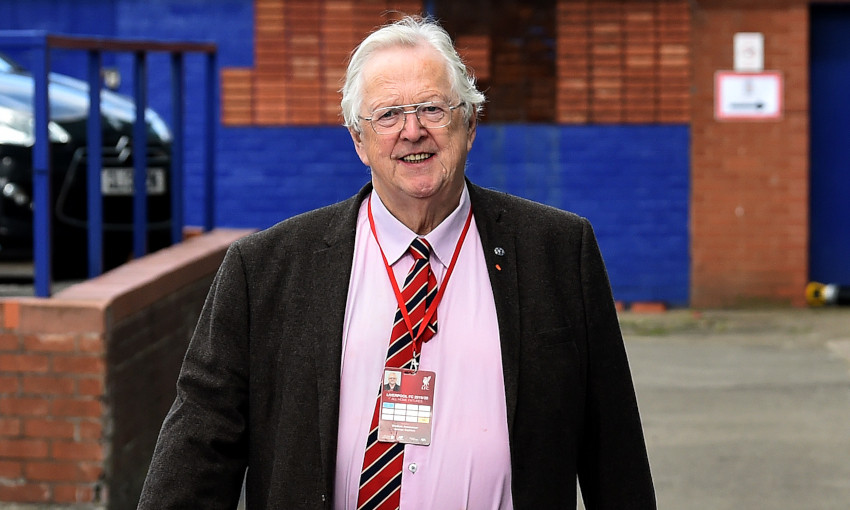 George Sephton had no experience in radio, no knowledge of making public announcements at a stadium, no obvious reason to believe he could fulfil a role that required both.

But on one trip to Anfield in the spring of 1971 – nudged into action by his wife after an error by the incumbent announcer – the boyhood Liverpool fan felt compelled to offer his services to the club.

And what is now half a century as the Voice of Anfield was soon under way.

“I said to my wife, ‘Oh this guy is embarrassing!’ She just looked at me deadpan and said, ‘It’s alright for you standing down here. I bet you couldn’t do any better!’” Sephton tells Liverpoolfc.com of how his appointment to the role occurred.

“Whatever possessed me – to this day I do not know why – but I went home and I wrote to [former LFC secretary and chief executive] Peter Robinson. It was a very long and quite well-constructed letter which boiled down to, ‘Dear sir, giz a job! I can do that.’

“Apparently, they just decided to get rid of this guy and they were wondering what to do next. My letter than landed on Peter’s desk. He got me in and we had a chat.

“He decided to give me a trial and, 50 years later, the trial is still in progress! I think I’m going to get the job permanently one day!” 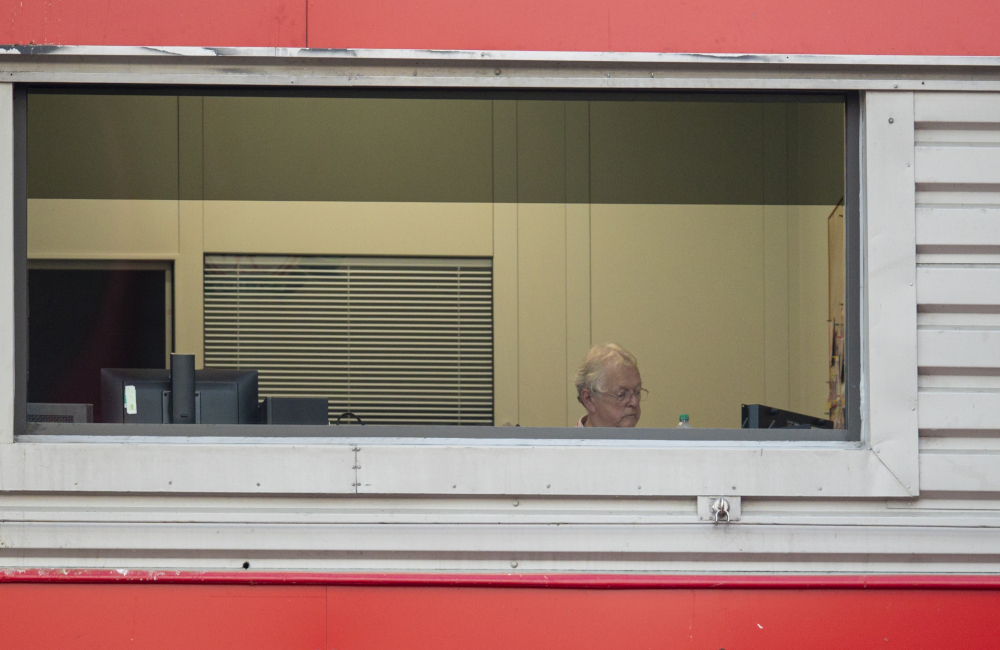 If George’s professional qualifications were absent, his Liverpool FC credentials were impeccable.

His father trialled for the club in the 1920s and, having been born into a family of Reds, Sephton started to attend games at Anfield as a 13-year-old with friends in January 1960.

A decade later, with his match-going apprenticeship on the Kop served, he took up residence as a season ticket holder in the Paddock.

It was from that spot George decided to take his leap of faith with a letter to Robinson and while the stadium and the sport have evolved and adapted around him ever since, he remains a fixture of matchdays at Anfield with his unmistakable voice.

“I just turned up the first day and I did, parrot fashion, what my predecessor had done: the music, a bit of chat in between time, and reading the teams, that sort of thing and took it from there,” he explains.

“Obviously, I’ve been there that long it’s all second nature now, although over the years things have changed dramatically. I don’t read the teams anymore, there’s a lot of commercial stuff and the timing of the music is different.

“I used to play You’ll Never Walk Alone when I had read the teams and after it was finished the teams would come out. Rafa Benitez changed that in 2010 and he suddenly decided it would be good if YNWA was played after the teams were out on the pitch to frighten the opposition.

“Since the advent of the Premier League we now have this handshake music so I have a strict running order of playing the handshake music followed by YNWA and it has to be timed very well.

“Europe, again I get a strict running order. The teams are read out, YNWA is played, then they have their walk-on music and obviously their anthem.

“But it’s changed dramatically and people don’t realise, I do get a running order for every game. Luckily I just get to spend my life picking the music, which is quite challenging sometimes. You get people chasing me to play certain things and because I’ve got a reputation for playing local bands, I get inundated!”

George has witnessed, and provided the soundtrack for, many of the club’s greatest nights during his five decades as Anfield’s announcer.

Three occasions in the job stand out in particular for him, however, with the most recent – the 4-0 Champions League victory over FC Barcelona in May 2019 – “clear top”.

“Obviously, Saint-Etienne was something,” he says. “Actually, before that when I was standing on the Kop in 1967 we played 1860 Munich and we beat them 8-0 – and I still say that was the best football display that I’ve ever seen.

“Then you go on to Saint-Etienne and think: never top that. The semi-final in 2005 against Chelsea topped that.

“Then Barcelona in 2019 just knocked that off because everything just went like a dream. You are 3-0 down to the best team on the planet with all these stars playing for them and I think most people turned up just expecting they would see an exhibition of good football.”

What the 54,000 people inside the stadium actually saw that night was the most remarkable comeback as Jürgen Klopp’s side overturned a 3-0 deficit to reach the European Cup final, which they would go on to win in Madrid the next month.

The semi-final second leg even included a first of Sephton’s long Anfield tenure.

The outpouring of elation on the pitch and in the stands that followed the full-time whistle then coalesced into an iconic moment with a helping hand from Sephton.

The Reds squad and staff assembled at the Kop end to jointly sing You’ll Never Walk Alone and toast – and still, perhaps, try to understand – a truly incredible achievement.

“It’s a feeling you get,” says George. “The bottom line, deep down and when push comes to shove, I’m still just a Liverpool fan. I got lucky. There are certain things I feel it would be good to play – certain tunes at certain times – and that night it just had to happen.

“It was such an emotional night and the way it panned out, I put YNWA on and the entire squad lined up in front of the Kop and they joined in.

“At the end, people say it was a stroke of genius me putting on Imagine but it wasn’t actually. I’d actually run out of music! At that point I was thinking, ‘OK, you can go home now’ but nobody was moving!

“I operate nowadays off memory sticks. But in my little room I keep a small pile of compilation CDs, just in case there’s a problem with the memory stick. So, I’ve got CD decks as well.

“That night, I was thinking, ‘What do I do now?’ There, staring at me, was John Lennon’s greatest hits at the top of the pile. I just whizzed it out of its cover, banged it on and Imagine was the first track. I was thinking, ‘This doesn’t sound right for a football ground.’ But the whole Kop just joined in and it was an absolutely magical moment.”

For each Anfield game, George compiles a two-hour playlist of tunes for the build-up to kick-off.

He gathers a mix of genres from a wide range of sources, encompassing latest chart releases, tracks sent in on behalf of local bands – “which is heartbreaking in a sense because there’s so much good material knocking about” – and songs from the archive.

If a well-known artist passes away, they will be included in the next Anfield playlist by way of a tribute. Any attendees from the music industry can expect to hear one of their own records during their visit to L4, too.

“Elvis Costello has been to the match a couple of times the last couple of years, having not been for ages. I’ll get the nod when he’s coming and I make sure I play a couple of his tracks,” says Sephton.

“In fact, one track he put back in his set after the last game he was here for, Turning the Town Red, which he hadn’t played for years. I played it while he was there and he said to me afterwards that he was going to put that back in his set!”

The overarching aim is always to provide something for everyone as they await the action.

“I like to end up with a good mix. For two hours’ worth it’s got to be quite a mix to keep most people happy. I do play stuff that I really don’t like sometimes. But if it’s a No.1 hit I’ll play it.

“I know people get a buzz about hearing their music at Anfield and one or two of them have done quite well out of it.

“I know a couple of bands who have got contracts, going back a while and not recently, but especially in the ‘80s and ‘90s.

“I remember playing The Zutons and The Coral at Anfield and I had all their first tunes on CD. The band Teardrop Explodes, apparently someone told a guy at the BBC they owed their career to me! I thought, ‘That’s a bit over the top, but I’ll take that, thank you!’ It’s all part of the fun.”

George’s 50th anniversary arrives amid the unprecedented circumstances of the COVID-19 pandemic.

Three Premier League fixtures in December aside, football at Anfield has been played behind closed doors since it resumed last June.

Sephton remains in place on matchdays, however, and with plans afoot to further expand the stadium’s capacity and Klopp’s team competing at the highest level, any thoughts of retirement have been placed on hold.

“Everybody is happy, the building is fantastic, the atmosphere is fantastic, Jürgen has got the players playing for the club and everything has fallen into place,” he concludes.

“I said I would jack it in after 50 years but then I hear they are expanding the Anfield Road end and I’m thinking, ‘I’d love to have a go with a stadium of 63,000 people in it.’”

George's book, The Voice of Anfield - My 50 Years with Liverpool FC, will be published in May 2021.