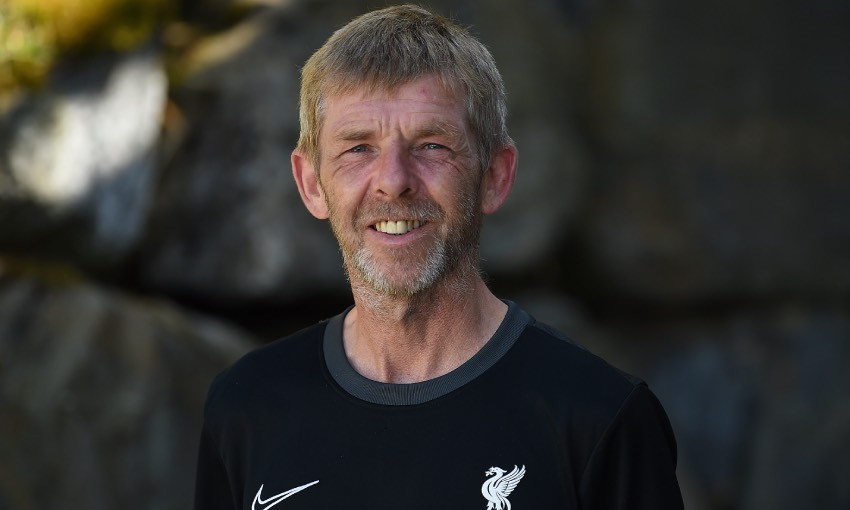 In testament to just how affable Mick Bibby is, Jürgen Klopp wanted to contribute to this article.

Mick will have served as a cleaner at the club for two decades next summer, and is currently a permanent fixture around the men's team – as a sanitiser during the COVID-19 pandemic.

"Wow, wow, wow," the Liverpool manager begins his eulogy. "Mick the cleaner is a legend, definitely.

"When I met him properly the first time, it was the Christmas party in my first year. We lost 3-0 at Watford, we came home and everybody expected that we will not celebrate. I said, 'No, no. We go there, it's the Christmas party.' When we arrived Mick was already in a quite worrying shape with a cowboy hat on his head!

"Great guy, wonderful person. It's so nice to have him around. There will come a time where we don't have to sanitise anymore and we will find another job that keeps him close to us because he's a great guy and I really like having him around." 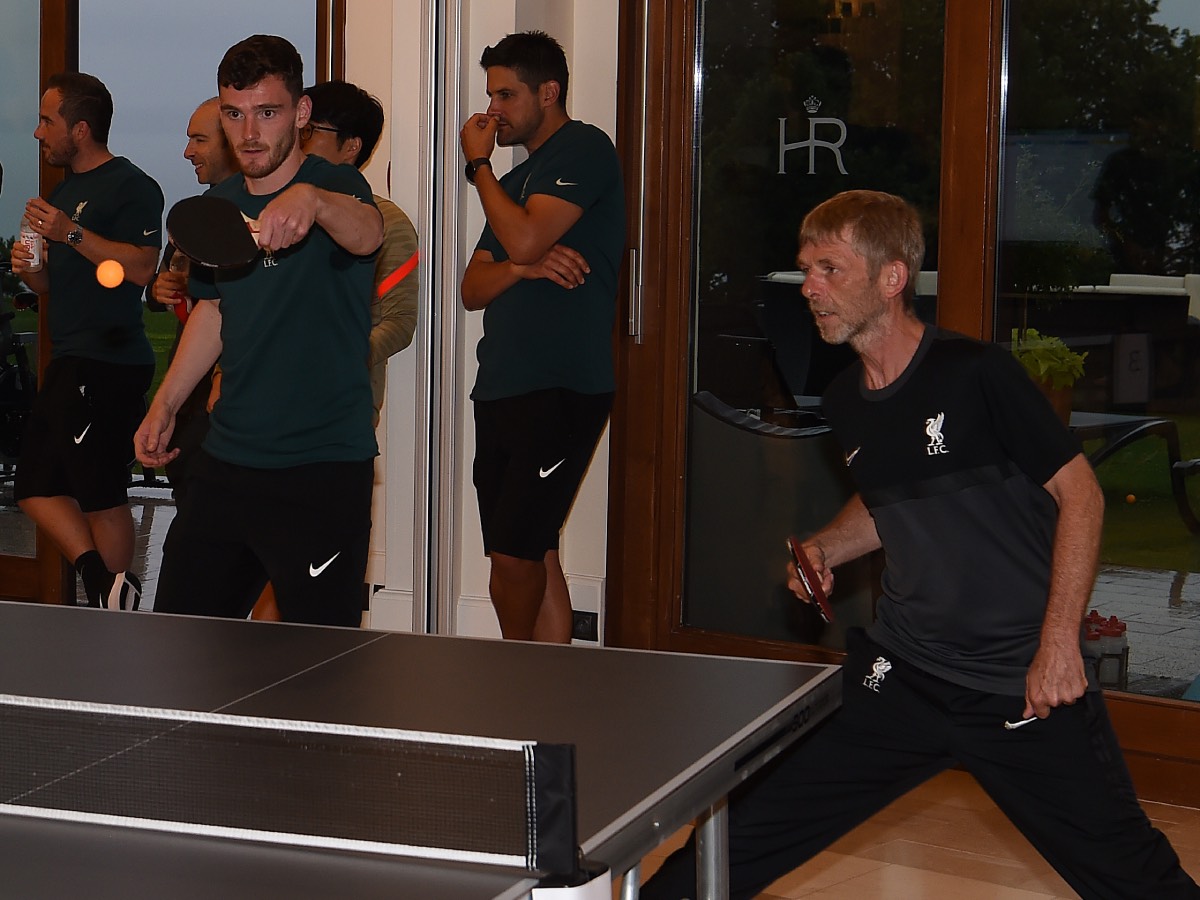 During a conversation with Liverpoolfc.com at the recent training camp in Evian, Klopp's words are put to Mick. A sense of disbelief comes about as he sits back in his chair.

"I don't know what to say, I'm lost for words, to be honest," he offers, blowing his cheeks with his hands on his head. "Unbelievable.

"I've loved every part of being around the team and sanitising for them. Anything I can do for the team to help them out, I'll do it.

"From working at Anfield, cleaning the stadium and after 12 years being asked to go to Melwood and clean for the team and clean everywhere, it was a dream come true."

Mick first started cleaning for the club in 2002. Taking on an all-encompassing role at Anfield, he jokes "the only thing we didn't do was cut the pitch and mark the lines."

Bowing to the hectic football calendar, he'd have to brush the stands, mop the concourses and clean the toilets in time for the turnstiles opening.

"You'd forget where you were because you'd just be busy clearing up and then you'd just look up and go 'wow'. Some people would give their left arm just to be in there, never mind work there. Just to look up and see the Kop... it was unbelievable.

"Once the fans were in, it was quite hectic and a lot of work to do – empty all the bins, clean the concourses, toilets, any spillages."

It was in 2014 when Mick was asked to be a cleaning supervisor at Melwood, not far from the Stockbridge Village area he grew up in.

"It was Christmas come early for me," the lifelong Liverpool fan says. "I'd walk around the corner and Steven Gerrard would be there or Carra and it was like 'wow', and I'd turn around and walk away.

"When you're in Anfield, you sort of learn to stay out of the way of the players when you're cleaning. But obviously when I came to Melwood, they're right in your face and you end up talking to them and saying hello and they start talking to you. It was surreal really, to be honest.

"They made it easy, to be honest, the players. They came to you, do a fist bump or ask you how you are. It was great. I'm on first-name terms with all of them now."

When football returned during the pandemic in May 2020, Mick took on greater responsibility and, as a result, a new nickname.

In addition to his cleaning role at the AXA Training Centre, he now follows the first team wherever they go to disinfect rooms, surfaces and equipment. 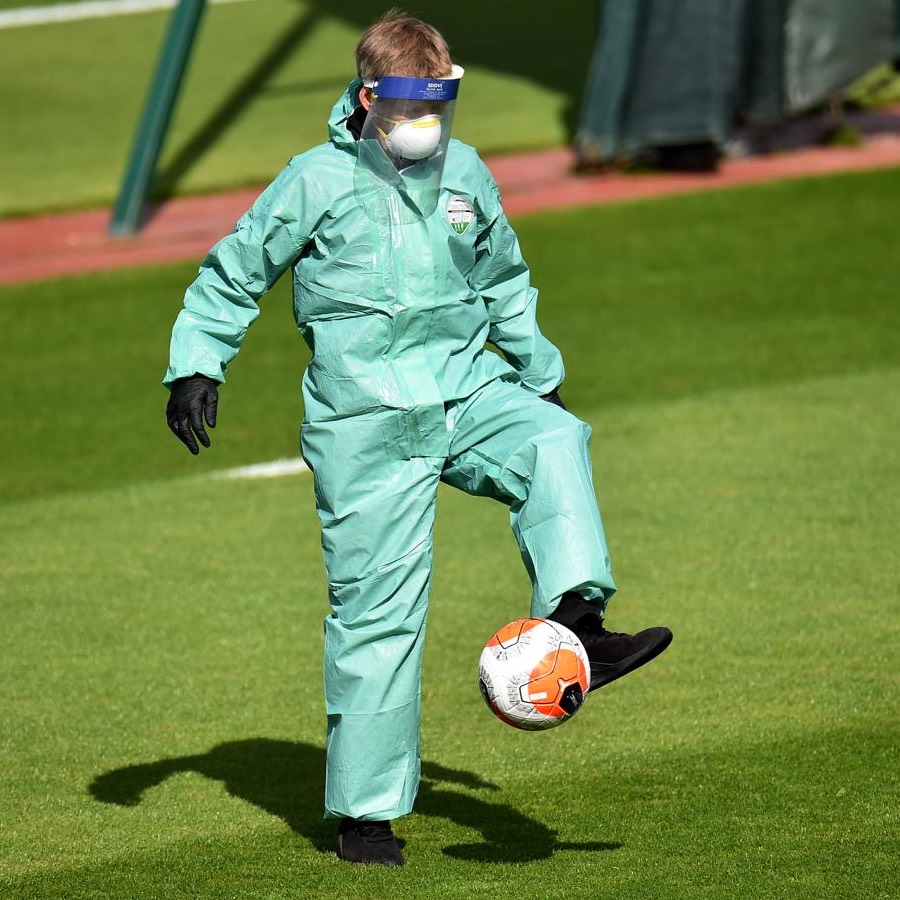 "The Ghostbuster – that's all I get called because of the backpack I carry around with my sanitiser wherever I go," he laughs. "Even now in France, le Ghostbuster!

"Just going with the team home and away, coming to Evian, Austria and spraying all the hotels – I try to spray anything that moves. I love it.

"You wouldn't believe how many people it takes to make it run smoothly just so the players can just concentrate on the game of football."

It's an environment (clean and sanitised, of course) Mick wants to stay around. Even his Evertonian relatives are happy for him.

"I'm living the dream every day, it's unbelievable," he finishes. "All the players, the staff members, everyone – they go out of their way to make you feel part of the team. Everyone gets on together, has a laugh and I try to have a laugh with them if that's possible once I've done my cleaning.

"That was my dream to play for Liverpool, play football. I didn't actually end up playing football for Liverpool but I'm working for them in some type of scenario, which is a dream come true.

Those are sentiments wholly shared by Klopp and everyone else fortunate to encounter Mick.