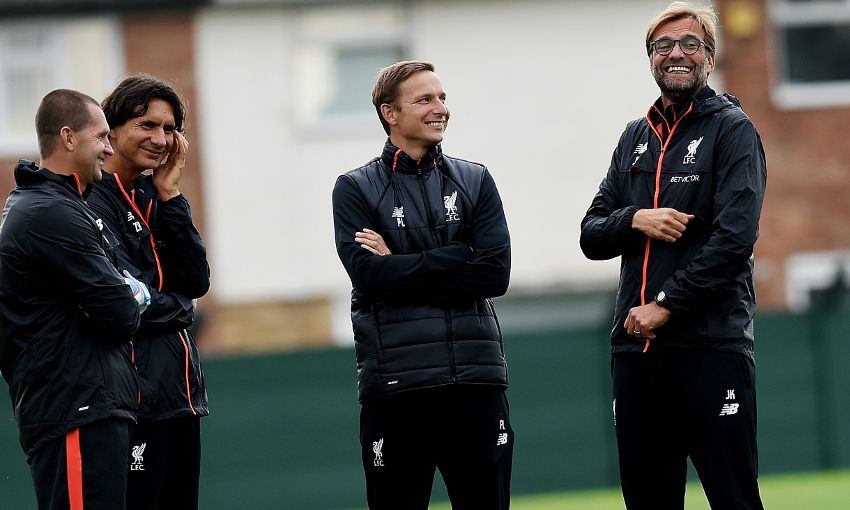 Pepijn Lijnders appears a couple of minutes late for the first interview in our brand new 'Behind the Badge' series on Liverpoolfc.com – but with a very good reason.

The Dutchman, usually such a stickler for punctuality, is in talks with Jürgen Klopp and fellow coaches Zeljko Buvac and Peter Krawietz as they continue to plot the ways to secure a win in the team’s next match.

Once ready, Lijnders walks us from their spacious hub to the right of the manager’s office at Melwood through to the bustling canteen, where it’s lunchtime and the area is filled with hungry players refuelling for training.

He pours a coffee, exchanges a few warm words with Lucas Leiva in Portuguese and finally finds a spot on the couches at the back of the room to begin the chat.

The short wait to get the conversation underway is understandable, and actually welcome, given the snapshot it provides of how a typical day runs for a man obsessed with football and improvement in all areas of the game.

“We have a coaching staff of five,” Lijnders explains. “And Andreas [Kornmayer] now comes in of course. Jürgen is creating a family overall, but in the coaching staff it feels like that as well.

“It has to be like that because you spend so much time together. And everybody came through different experiences, with good things, really good moments and also bad moments, every single one of us.

“It’s to take all these experiences into one group. Jürgen said in an interview it’s [about] 10 eyes. But that only works if you start with the end in mind, we always say, so we need to know how the end picture should look and then everything we do is based on that reference.

“You always have to start every single day by planning and preparing with the end in mind – our idea, our vision and our future.”

'You are the product of your own environment'

He typically arrives at Melwood around 8am and up first on the task list is an inventory of the players available for training, organised in co-ordination with the club doctor and sports science staff.

The ideas of the session – for both the group as a whole and individuals – are discussed and divided, with the immense planning that underpins their work ensuring everything is clear and nothing is left to chance.

“You can’t beat development for an individual player or person, if you feel that you are becoming better and developing as a player with what you put in,” the former PSV Eindhoven and FC Porto coach continues.

“If you are driving a Ferrari – because this team is hopefully a really quick one – but you put the wrong fuel in, it doesn’t work.

“If they feel that they are becoming better, there’s nothing that can create the same feeling inside to give more, to work hard and work better.

“That’s why from all different aspects, if we can influence the environment of the player, the collective, the whole – because the ones who win are the ones who think they can – we have to believe in it.

“We believe that we have to win games on Monday, Tuesday, Wednesday, Thursday and Friday. It’s how you prepare, how you plan and how you become better as a collective.

“You are the product of your own environment. It’s so important that we invest in people like Andreas and Mona [Nemmer] as well, because from all different areas if you influence players it’s exactly the same.

“To regain freshness – and if you believe in the responsibility of recovery – then Mona and Andreas are so important. So it’s good that we invest there because the players can become the best they want.”

Lijnders’ commitment to helping young players achieve their potential has been evident throughout his time at Anfield so far, which began when he joined the club’s Academy as U16s coach in the summer of 2014. 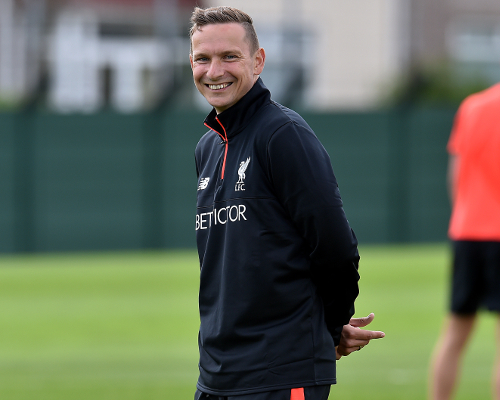 Such was the impression he made, the 33-year-old stepped up to senior duties within 12 months, assuming the role of first-team development coach under Brendan Rodgers and maintaining the position after Klopp’s appointment.

His belief in youth is infectious, convincing and absolute: the children are the future.

“You need to focus on training methodology and all these environment things because that’s the only way to compete against money.

“That’s why youth becomes really important, because if you have players who are grown up in a certain style of play and in a certain way of character – so, bravery – then you can create a true advantage. But this takes time, it’s a longer period.

“This is the idea we have. We don’t want to produce players to say we have Academy players in our first team. We believe that is a way of winning in the end, that’s a way of having an advantage over the opposition, who think in money and resources straight away.

“In the past, every club had this core of players, five, six or seven who stayed at the same club for a long, long time. They were home-grown so they knew the style.

“Now comes where we can have a true advantage.

“Nowadays, every single squad is based on 20 different cultures and is based on six or seven transitions every year, eight or nine transitions. So the coach has become more important than ever, because there is no stuck way. The coach decides.

“It’s not that five or six core players are there, because they are changing. There isn’t one culture, because there are 20 cultures. In the past, a new player came in and added something to that core.

“But now all new players come in, so that’s why the coach in the 21st century has become more important. That’s why in the past, the teams with the core and the top coach won everything – Sacchi, Van Gaal with Ajax, Cruyff with Barcelona.

“Now the idea is: how can we create a core?

“And the only way to do it is through the Academy, but you have to accelerate processes. You can’t do it in the same way everybody else does because then you don’t have an advantage.

“If you really believe in producing players from your own youth, you have an advantage – because they go through walls for you, they know the style like no-one else and they can create a core.”

The father of two, who believes he has already learned more about life from his eldest son than anybody else, does find time to switch off with his family, including his partner of 17 years, Danielle.

‘The bag goes to the side’ when at home, with Lijnders drawing a comparison between the importance of avoiding fatigue in football and in your personal time.

But his dedication during working hours is enormous – and while the privilege of working for Liverpool remains ‘really special’, it is overwhelmed by a much bigger sense of responsibility.

He adds: “Everything gets defined, in the end, by being the best. First of all, the best we can produce. We believe that to be good enough to win titles. That’s why we work so hard.

“That’s really important for people to know. It’s why we choose our style – a fighting attitude when we don’t have the ball – and we want to be a tough team, because indirectly we want to represent the emotions of the fans.

“And directly we want to feel that the stadium, coaching staff and the team are connected. Because we believe as well that an emotional advantage is a big advantage.

“Anfield especially can create an emotional advantage. That’s why we choose that style. If the fans didn’t identify themselves with the playing style you can never create that advantage.

“It is an advantage that exists in the game. Hopefully, we can build our team through those ideas. We do that. Hopefully they can do it against the best opposition, to be able to compete on the highest level.”

His voice trails off slightly as he completes that final sentence, visibly distracted by the picture being created in his own mind of Liverpool at the summit of the game.

And then he is off again, back through the corridors of Melwood, where those working behind that famous club badge are trying to make the vision a reality.

But not before Lijnders shares the last task on his daily list: “I learn from everything, everybody learns from everything if you put the mirror in front of you.

“That’s the hardest thing as a coach. Every single session, come back, mirror – could we do better here? Could we do this and that? That’s how I work and that’s how you should work.”