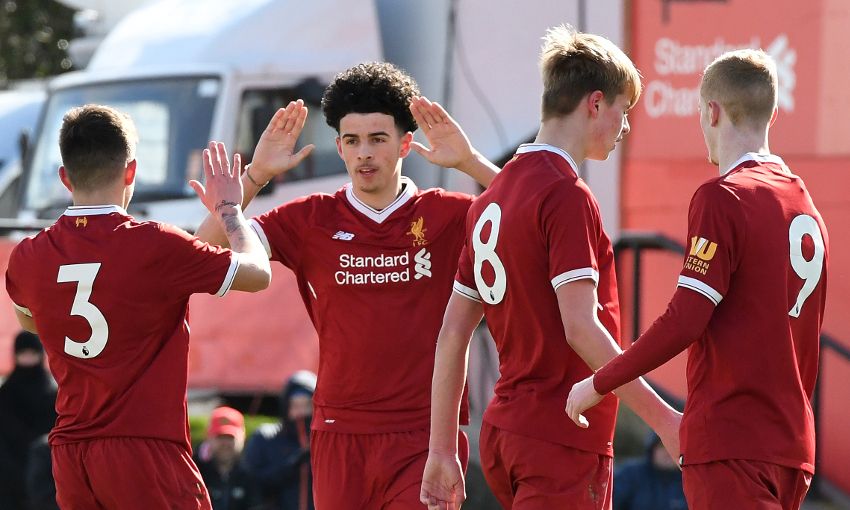 Liverpool kept their U18s Premier League title bid on track as they moved back up to second by thrashing Middlesbrough 6-0 in Kirkby on Saturday afternoon.

Steven Gerrard's team edged an evenly contested first half thanks to an early wonderstrike from Rafael Camacho and a well-worked goal from defender Adam Lewis.

And the Reds built on their advantage in the second 45 minutes, controlling large passages of play and adding further goals through Curtis Jones (2), Niall Brookwell and Rhys Williams.

If the disappointment of a midweek UEFA Youth League defeat to Manchester City still lingered for any of the hosts' starters as this game got under way, it certainly wasn't evident in their performance.

Lewis' low ball across the box almost provided an opportunity for Glen McAuley to open the scoring shortly after kick-off, and just 12 minutes had elapsed when the Reds did take the lead.

Camacho looked to have run himself into a blind alley as he moved left to right across the Boro box, but a change in direction opened up space for the Portuguese to fire a wonderful curler back across the goalkeeper on his allegedly weaker left peg.

The visitors carried plenty of threat themselves and were so unfortunate not to level things up when Tyrone O'Neill saw successive close-range shots blocked by Rhys Williams, Neco Williams and then goalkeeper Viteslav Jaros.

But Liverpool responded by going close through Camacho and McAuley on the break and, with just over half an hour gone, they were 2-0 up.

A brilliant, patient piece of build-up play around the box saw Camacho, McAuley and Elijah Dixon-Bonner open space for the latter to play Lewis into a great position inside the box.

The Scouse full-back subsequently showed great composure to bamboozle his defender with an extra touch before sneaking the ball home on his right foot.

LFCTV GO: Watch the best of the Middlesbrough action

The Reds could have been three up at the break had Camacho not poked wide after chasing down a poor backpass moments before the referee's whistle sounded, but they did not have to wait long for a third goal following the restart.

Three minutes into the second period, a Lewis corner - which looked on first glance to be a poor delivery - somehow snuck to the back post, where Jones was on hand to sidefoot into the far corner.

Middlesbrough responded to that blow in admirable fashion, crafting three chances that on a different day might have seen them draw level.

However, Jaros had different ideas, the goalkeeper producing outstanding saves from Stephen Wearne, Stephen Walker and then O'Neill in a five-minute period of Boro domination.

The Reds quickly regained their composure after that flurry of pressure to enjoy a strong finish that added significant gloss to the scoreline.

Ten minutes from the end of normal time, a fine through-pass from Camacho picked out Brookwell's intelligent run and the 15-year-old showed composure belying his tender years in firing into the corner.

And things soon got even better for the Reds as Lewis' flat cross from deep found Rhys Williams - still up from a corner - for an unchallenged header into the corner.

Incredibly, there was still time for another strike from Jones, who showed incredible feet to deceive a bank of Middlesbrough defenders in the box before opening his body and curling in a shot off the post.