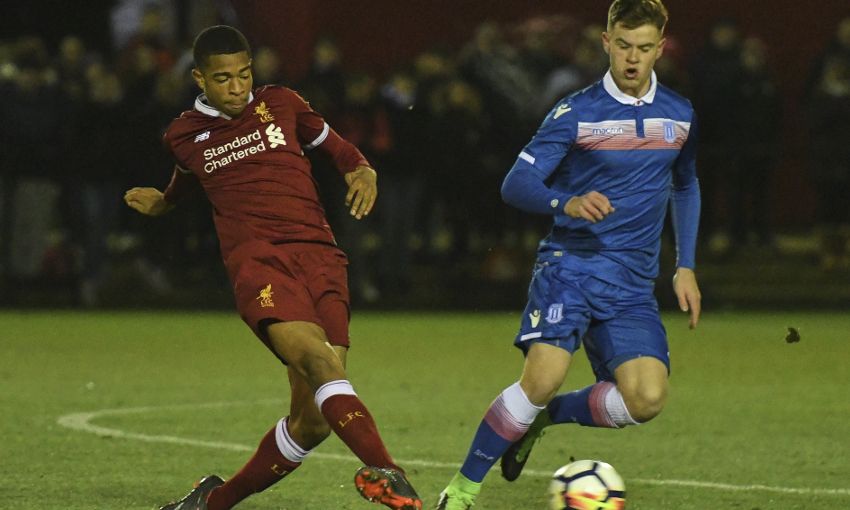 Liverpool U18s were denied top spot in the league as Stoke City came from a goal down to claim a 2-1 win at the Academy.

Glen McAuley, the captain for the night, bagged the opener on 24 minutes with his 12th strike of the campaign – a cool finish from inside the visitors’ area.

But Stoke were in control for much of the second half and levelled the score when Jordan Greenidge raced clear and found the bottom corner.

And the young Reds’ unbeaten record in the U18 Premier League was ended in the final seconds from the penalty spot, Krisztofer Szereto converting after Morgan Boyes was judged to have handled in the box.

LFCTV GO: Highlights of the clash at the Academy

Steven Gerrard’s team had the first glimpse of goal in the sixth minute.

A slack pass back towards his own net by Joel Mvovi was pounced on by the alert McAuley, whose sweeping shot in search of the bottom left corner drifted wide.

The Republic of Ireland youth international was soon presented with the next opportunity – and an even better one, too.

Neat approach play by the young Reds saw Edvard Tagseth spread the ball out to Neco Williams on the right flank. His quick, low cross from deep to the near post found McAuley and the No.9 fired off target.

Stoke perhaps should have taken the lead five minutes later, though. Mvovi broke through the lines to run clear in the area but Caoimhin Kelleher mastered the one-on-one to block his close-range finish.

And within seconds, Liverpool struck.

McAuley helped to start a passing exchange involving Tagseth and Abdi Sharif before spinning into the Stoke area to collect the latter’s assist and slot a left-footer around Josef Bursik. 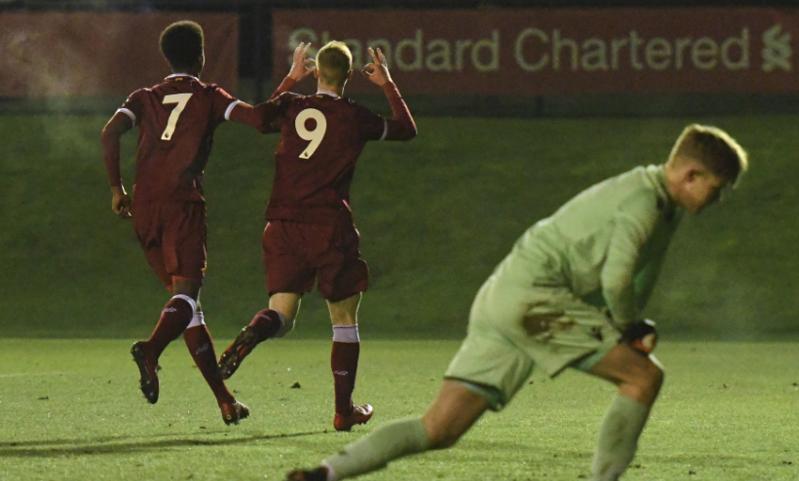 The hosts carried that lead into the break and would have hoped to extend it, only for the away team to kick off the second half with serious intent.

Abdoulaye Toure looked a certain scorer on 55 minutes until a crucial saving challenge inside the box by Neco Williams, before the Potters attacker skied over the crossbar when unmarked 12 yards out.

But they did equalise at the midway point of the period.

Jacob Twyford’s pass over the top invited Greenidge to power around his marker and roll a precise effort past the reach of Kelleher and into the net.

Both sides pushed for a winner in the remainder of the game and Szereto was inches away from successfully whipping a 25-yard free-kick inside the right post.

McAuley’s first-time hit from Tagseth’s cross was excellently stopped by Bursik, while at the other end Kelleher punched away Greenidge’s blast from near the byline.

Instead, the match was settled from a contentious penalty.

Boyes was penalised for handball inside the area as stoppage-time began – and Szereto smashed the spot-kick high into the net to inflict a first league defeat of the season on Gerrard’s side.