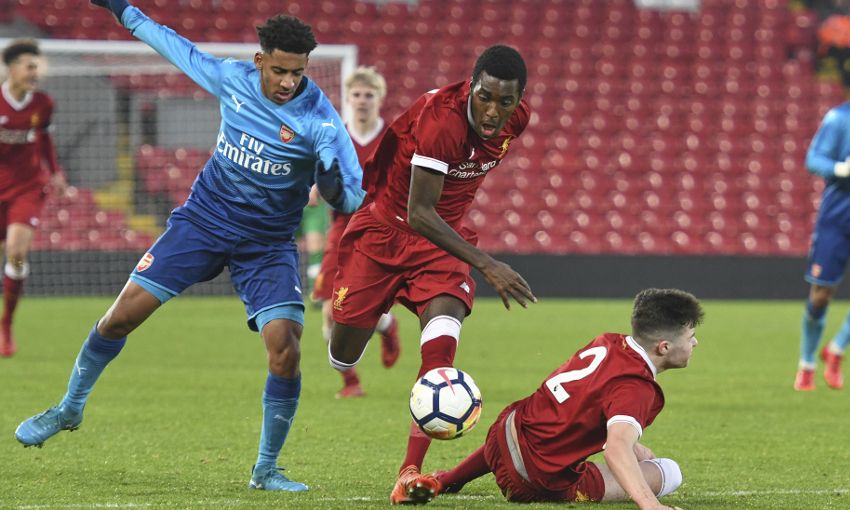 There was heartbreak for Liverpool U18s as they suffered a 3-2 defeat against Arsenal after extra-time in their FA Youth Cup fourth-round tie at Anfield.

Steven Gerrard’s side trailed in the 16th minute of the clash, Robbie Burton benefiting from a significant deflection to find the net at the Kop end.

But Curtis Jones levelled moments before the interval with a composed finish from Rafael Camacho’s set-up and the 16-year-old bagged his and the Reds’ second moments after the restart – via a fortunate flick off a defender.

Their lead held until the final five minutes, when substitute Bukayo Saka found the roof of the net to force extra-time and the only strike in the additional 30 minutes came from Arsenal’s Tyreece John-Jules to eliminate the hosts.

There was a slow start to the affair on a cold afternoon at Anfield, with Trae Coyle denied by an excellent Neco Williams block while John-Jules let the home side off as he scuffed a decent chance wide from inside the area.

The Gunners did take the lead with 16 minutes on the clock, however, courtesy of a large slice of luck.

Gerrard’s charges cleared Xavier Amaechi’s free-kick delivery from the right hand side to the edge of the box, but the ball was recycled to Burton and his drive took a wicked deflection and sailed past the unfortunate Viteslav Jaros into the net.

Arsenal dropped deeper in an attempt to settle the tempo of the game and preserve their lead, leaving Liverpool frustrated in their efforts to pick a way through to goal.

Adam Lewis’ crossing from full-back offered encouragement without creating a clear-cut chance – but the young Reds did equalise with three minutes remaining in the first half.

Much of the credit for the leveller goes to Camacho for his rapid dribble along the left flank and the vision he showed to knock an outstanding assist into the area for Jones to nonchalantly side-foot back across Joao Virginia.

And the Reds carried their momentum into the second half to edge ahead on 49 minutes.

Jones persevered as he tried to create room at close range and, once a slight gap opened up, the forward fired a cross-shot that nicked off a defender and nestled in.

Gerrard’s team thought they had a third shortly after as Liam Millar clinically headed a Lewis cross into the top corner. A raised flag from the linesman quickly cut short their celebrations, however.

There were half-chances for John-Jules, Matthew Smith and Amaechi as Arsenal sought a response in a relatively balanced half of football – and they finally got one with just five minutes left to play.

Substitute Saka’s pace and trickery from the left flank fashioned an opportunity to shoot that he grasped by firing high into the roof of the net, meaning extra-time as evening fell.

Buoyed by the equaliser, the Gunners began the additional half-hour on the front foot and threatened when Amaechi – a constant nuisance to Liverpool – broke in behind and forced a hasty clearance from Tom Clayton.

They did take the lead in the 97th minute, though.

From a similar move, Saka was freed at the right hand side of the Reds box and his cross was converted under pressure by John-Jules.

Liverpool refused to give it up and a last-gasp, fingertip save from Virginia denied a bobbling header from Yasser Larouci deep into extra-time, but it wasn’t to be for Gerrard and his team and Arsenal move on to the fifth round.