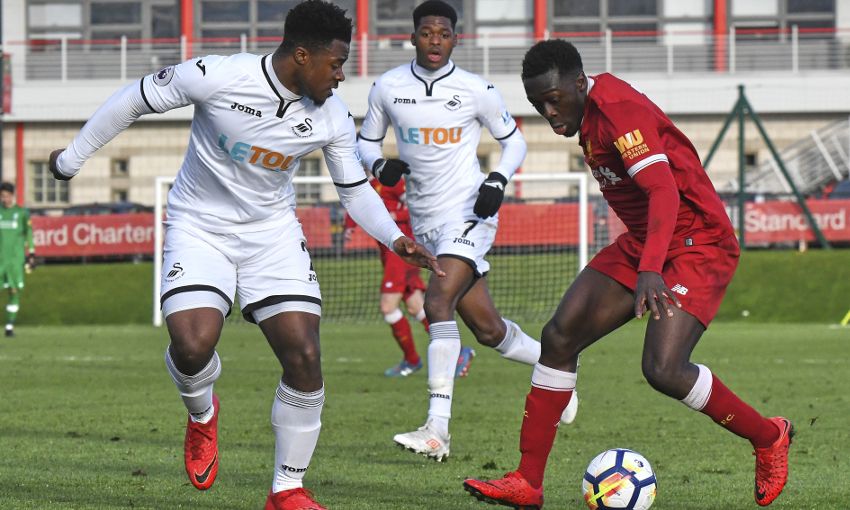 Liverpool U23s endured an afternoon to forget as they were beaten 3-1 by Swansea City in their Premier League 2 clash at the Academy.

Despite coming into the game on the back of a fine success at Sunderland last weekend, the young Reds were handed a sobering defeat by their Welsh counterparts in Kirkby.

Cameron Brannagan’s second-half penalty proved mere consolation as Neil Critchley’s side fell short of a comeback against 10 men after the break.

The visitors made the brighter start and were rewarded for their early endeavours on 14 minutes, George Byers releasing winger Jordan Garrick to run through and send the ball past Kamil Grabara.

There were half-chances for Rhian Brewster and Bobby Adekanye as Liverpool tried to respond in haste but they were indebted to their goalkeeper’s reflexes in saving Oliver McBurnie’s header from a Swansea corner.

But, six minutes before the interval, the deficit increased.

Byers was the creator once more along the right flank and his cross allowed McBurnie to clinically find the bottom corner and open up a deserved advantage.

LFCTV GO: Watch the best of the action from the outing with Swansea City

Any hopes Critchley might have had of a comeback were extinguished within 30 seconds of the restart.

Pressure on Grabara as the Pole attempted to deal with another delivery from another right-wing cross saw the ‘keeper drop the ball and present Byers with a tap-in.

But, shortly after the hour mark and having already struck the crossbar with a free-kick, Harry Wilson won a penalty for the Reds. Swansea stopper Gregor Zabret fouled the Welshman and Brannagan successfully sent the spot-kick home.

Two huge penalty appeals were rejected, though, and the necessary goals did not materialise – leaving the Premier League 2 leaders pointless on the day.