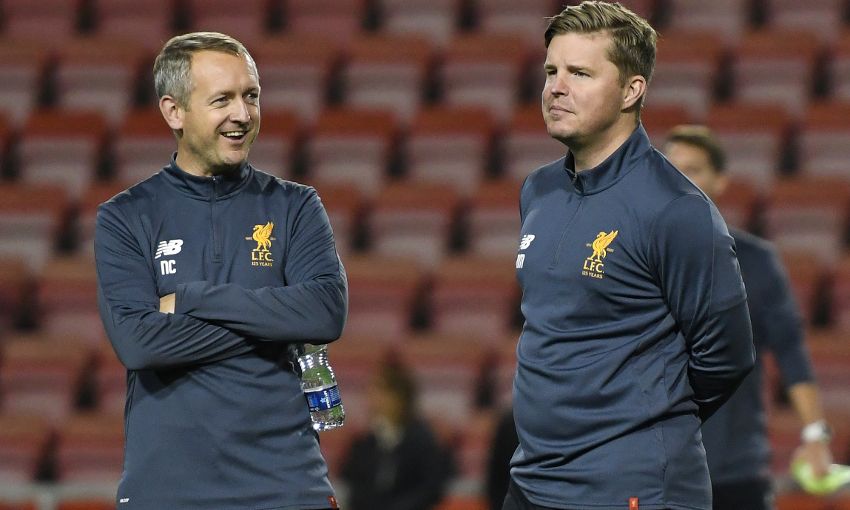 Liverpool U23s boss Neil Critchley has spoken of the importance of creating a clear pathway for young players as they hope to follow in the footsteps of the likes of Trent Alexander-Arnold and Ben Woodburn by training full-time at Melwood.

The young Reds recorded their seventh Premier League 2 win of the season on Monday when they beat Manchester United 3-1 to extend their lead at the top of the division.

However, while Critchley accepts it’s a good feeling for the players to lead of Premier League 2, doing so is not the main objective for his U23 team.

"Someone said to me the other week at U23 level it’s 100 per cent development and 99 per cent winning. That’s right and you don’t want it to ever flip the other way," Critchley told Liverpoolfc.com.

"We want to win games, of course we do, you are expected to win games at Liverpool but the pathway of our players is the most important thing.

"If that means we were a younger side or some of the results started to suffer then so be it, because that means the next players are getting a new challenge, and if it meant we didn’t win the league then so be it.

"We’ve got a very good group of players who are winning games so that’s our job. It will never get in the way of what we think is the right thing to do for the player and that’s really important."

Critchley’s charges are back in Premier League 2 action on Sunday afternoon when they host Leicester City at Prenton Park, live in front of LFCTV's cameras.

Kick-off is at 1pm GMT, and the U23s boss is hoping his side can give another good account of themselves after they bounced back from their first loss of the campaign at Derby County with the win over United.

"Off the back of a defeat the saying goes a good team never gets beat twice on the bounce and the challenge for us was we hadn’t beaten Manchester United for a good few years at this level," he added.

"We needed to try and chance that record and I thought we did that on Monday night in pretty convincing fashion.

"I thought 3-1 was about the right scoreline and it could possibly have been more for us. They had some chances in the second-half but we had plenty of opportunities, particularly in the first-half.

"Some of our play and the control we had in the game was excellent and I thought it was a really good team performance."

As to the challenge posed to the Reds by the young Foxes, Critchley admits his side will have to maintain the high standards they have set so far and not underestimate the opposition.

"It’s a different test to Manchester United but tougher in different ways," he said.

"They will be very well organised and tough to beat.

"Their coach Steve Beaglehole has been with them for a number of years. He is very experienced and very good at getting the best out of his players so we expect a very tough game.

"They haven’t scored many goals but they haven’t conceded many either and are hard to break down.

"We will have to be really concentrated in our possession and patient in our play if we want to try and break them down and win the game."