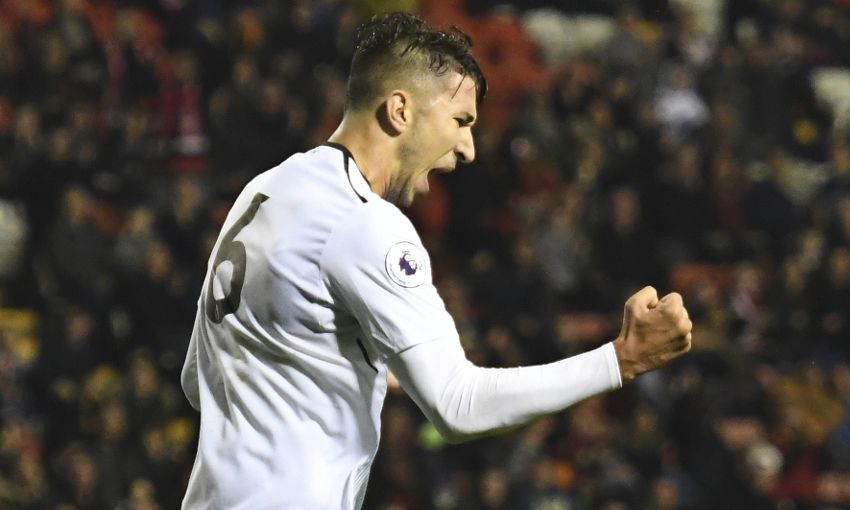 The midfielder followed up a brief outing for the first team at Wembley on Sunday by starting for Neil Critchley’s side in their Premier League 2 encounter.

Grujic’s presence in the centre of the pitch aided the young Reds during a 3-1 victory at Leigh Sports Village, the Serb restoring their advantage with a header from a corner when the score was level.

And that despite there being a decision for Critchley and his staff to make on whether the 21-year-old would even continue in the second half due to illness.

“We asked Marko to do a specific job for us as a No.6. Maybe he’s better as a No.8 or No.10, but he’s good on the ball and he controlled the game for us,” the U23s manager told Liverpoolfc.com.

“He’s very good in both penalty boxes so it’s not a surprise he scored with a header at that end. But some of his defensive headers were excellent as well.

“He was struggling a little bit at half-time with illness and we were undecided whether to keep him on, but he wanted to stay on and thankfully we did.”

Ovie Ejaria and Harry Wilson were also on target for Liverpool on the night and the result increased the lead at the summit of Premier League 2 for Critchley’s side to five points.

“We played very well in the first half and completely dominated the game. We were disappointed to only be 1-0 up at half-time,” he reflected.

“In the second half, the longer it goes on at 1-0 you know they are always likely to create an opportunity. I felt we contributed to our own downfall a little bit at the start of the second half; we spoke about that at half-time, about being concentrated in possession and punishing them. I felt we gave them some impetus and confidence in the second half.

“But our character after that, at 1-1, was excellent. And I think 3-1, even though they had a couple of chances in the second half, was the right scoreline.”