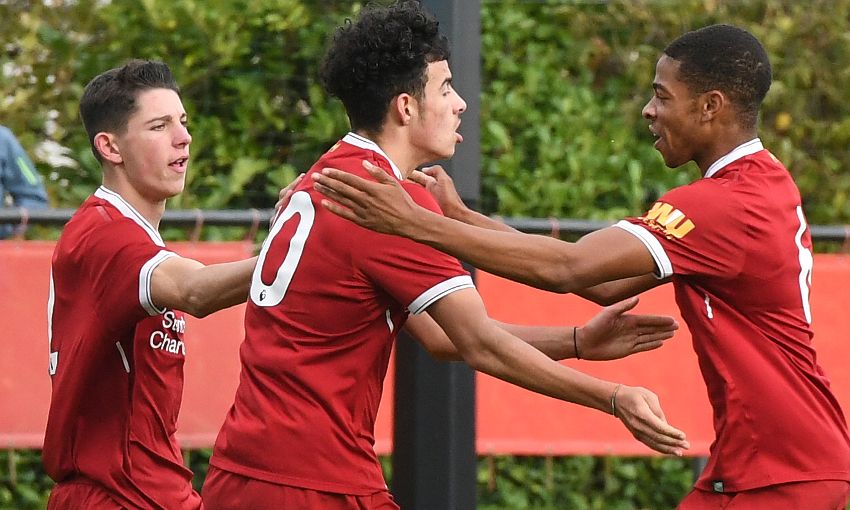 Liverpool U18s kept up their unbeaten start to the new Premier League season as they twice came from behind before thrashing West Bromwich Albion 5-2 on Saturday.

An early strike from Sam Wilding put the Baggies ahead but Curtis Jones quickly pulled the Reds level before Myles Hall and Adam Lewis exchanged penalties to cap a four-goal first half.

The second period saw the hosts turn on the style, with Paul Glatzel giving Liverpool the lead shortly after the break and substitute Liam Millar notching twice to put the seal on the result.

With Liam Coyle sidelined by a back injury and Edvard Tagseth still on international duty, Steven Gerrard named Elijah Dixon-Bonner and Glatzel as his starting central midfield pairing.

That lack of continuity in the middle might well have contributed to what was a sloppy start by the U18s, with West Brom the quicker out of the blocks.

And the visitors made it pay ater just five minutes as Rayhaan Tulloch's pull-back was tapped in from close range by Wilding.

The goal prompted a rapid response from the Reds, with Jones firing in an equaliser from the edge of the box after a one-two with Rafael Camacho just six minutes later.

But, moments after Glen McAuley had come within inches of putting the hosts ahead from a Jordan Hunter cross, they were behind once again.

A poor clearance from debutant goalkeeper Vitezslav Jaros invited West Brom into the Liverpool box where Tulloch was brought down by Rhys Williams, with Hall finishing the subsequent spot-kick.

The end-to-end nature of the opening half-hour didn't end there, though, with Gerrard's side winning a penalty of their own when George Harmon handled a Luis Longstaff cross.

On this occasion, Lewis stepped up to power the ball home.

In the aftermath of his penalty, Lewis' influence grew, and he could have had a hat-trick of assists from left-back before the half-time whistle.

Glatzel twice almost scored from the Scouser's deliveries, while Williams also nearly benefited prior to the break.

But it was Jones who came closer than any of his teammates, hitting the post after bursting past his man in the box.

The Reds started the second period in much the same way that they ended the first, and took just three minutes to get themselves ahead.

Lewis' ball in behind allowed McAuley to sprint away and the Irishman picked out Jones who, despite having the freedom of the box, chose to unselfishly square for Glatzel to hammer home from a more straightforward angle.

With his side leading, Gerrard opted to shuffle his pack on the hour mark, and his decision to replace McAuley with Millar soon proved to be inspired.

The Canadian's first touch of the ball saw him coolly finish off Dixon-Bonner's through-ball, and he doubled his tally shortly after, touching in a low Lewis cross.

Millar's second marked the end of the most frenetic period of the game but a more sedate procession to the full-time whistle still saw former Red Kieran Holsgrove hit the bar for West Brom after a rapid breakaway.