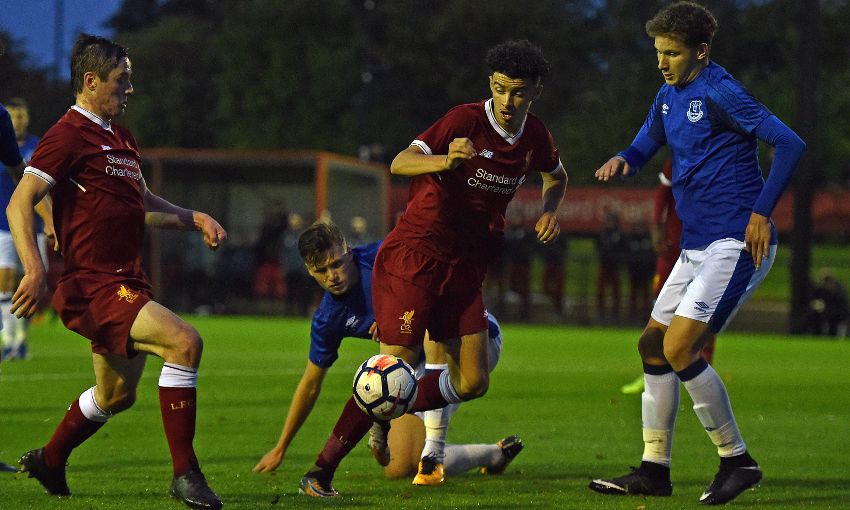 Steven Gerrard’s first Merseyside derby as a manager ended in victory as a quick-fire double from Curtis Jones helped Liverpool U18s to a 3-1 success over Everton at the Academy on Friday night.

The Reds recovered from the disappointment of falling behind to Anthony Gordon’s opener for the Blues just before half-time.

Jones deservedly drew the home side level on 69 minutes when he superbly made space for a shot inside the area and clinically dispatched into the back of the net.

The lively forward was on the scoresheet again just seconds later, converting with a well-executed half-volley from a corner to put Liverpool in front.

Rafael Camacho rounded off the scoring with a clinic low finish across goal to put the seal on a good night’s work in Kirkby and maintain the U18s’ unbeaten start to the campaign.

Before the game, Gerrard had outlined the importance of controlled aggression as his side looked to maintain their unbeaten start to the season.

And with the rain steadily coming down in Kirkby, the early challenges were typically firm and the play frenetic as both teams set about asserting themselves on the contest.

Gerrard had also highlighted a need for defensive improvement, with 10 goals conceded already in league and cup action so far.

However, with eight minutes gone, Liverpool could have found themselves behind when Stephen Duke-McKenna controlled a long ball forward from the visitors and pushed it into a shooting position on the edge of the area. His eventual strike, however, rolled wide of the far post, never troubling Kamil Grabara.

The Reds soon settled into their stride as they controlled play for long periods of the opening 45 minutes; Camacho struck over the bar from a well-worked corner routine before Edvard Tagseth stung the palms of Nicolas Defreitas-Hansen with a drive from distance.

Everton threatened again momentarily when Gordon got in behind and attempted to deftly lob the ball over Grabara from the edge of the area, but it bounced inches wide of the far post.

Gerrard’s side responded with Liam Millar sending a Camacho lay-off over the bar before Luis Longstaff went close with a low effort.

Then, on 38 minutes, the game’s first decisive moment unfolded as Jones went to ground under a challenge inside the area. Appeals were waved away and Everton broke at speed, resulting in Gordon wriggling into space and steering beyond Grabara from close range.

Despite the disappointment of conceding, Liverpool began the second period by continuing to dominate possession.

Substitute Glen McAuley – on for Longstaff – caused panic for the Blues’ defence when he manoeuvred into space inside a crowded box but his eventual attempt was blocked by the legs of a defender.

Then, Millar sent a hooked shot from the near-post over the crossbar from Jones’ centre from the right.

But finally, the Reds got the reward their play deserved when the excellent Jones equalised with a goal of wonderful individual quality on 69 minutes.

Collecting the ball inside the area, the 16-year-old bobbed and weaved beyond a flurry of Blue shirts to create space before slipping a low drive beneath Defreitas-Hansen to level up the scoreline.

And it was to get even better for Liverpool just over two minutes later when Jones grabbed his second.

Adam Lewis’s corner from the left found the forward, who met it with a powerful half-volley that skipped off the wet turf and bounced up over the dive of Everton’s goalkeeper, sparking scenes of celebration involving the manager as Jones raced to the touchline.

As time ticked away, Camacho capped off a fine evening’s workout for Gerrard’s men when he cut into the area and struck across goal, finding the back of the net via the base of the post to secure a 3-1 success and victory in the derby.