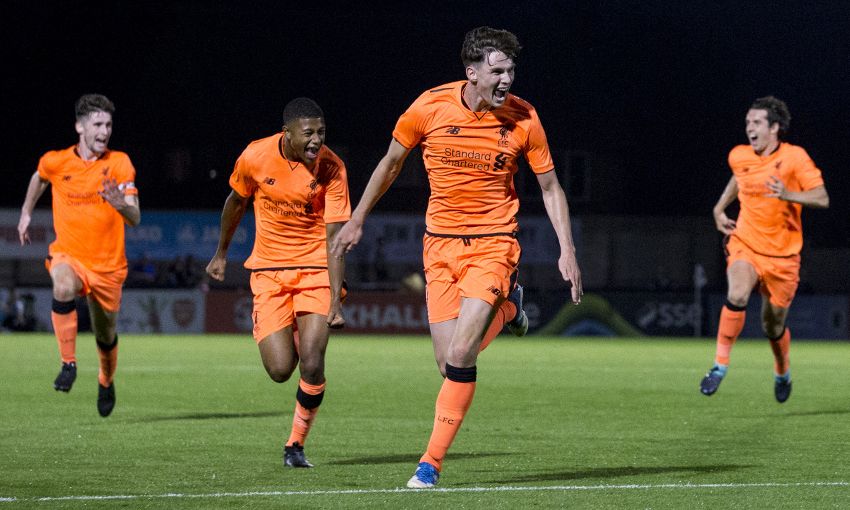 U18s held by Newcastle in action-packed draw at the Academy

Liverpool U23s extended their winning start to the Premier League 2 season to three games with a 2-1 victory over Arsenal on Friday night.

The Londoners took the lead in the clash at Boreham Wood, with Reiss Nelson’s goal three minutes into the second half edging the home team in front.

But the young Reds, who had won each of their opening two matches of the campaign without a concession, levelled through Rhian Brewster’s 70th-minute equaliser.

And Sam Hart proved the hero when his free-kick screamer with one of the last kicks of the game whistled into the back of the net from distance.

Danny Ings, again clocking up minutes with the U23s, was typically involved in the best of the early goalmouth action, seeing a one-on-one saved by the goalkeeper from Yan Dhanda’s through ball.

The same pair combined midway through the first half but the senior man nodded his younger colleague’s corner wide, while Eddie Nketiah hit the side-netting at the other end.

The Arsenal man was then thwarted by a crucial, last-ditch intervention from Hart shortly before the break, and Dhanda had an effort destined for the top corner tipped over.

When the breakthrough was finally produced in the second period, it was the Gunners who got it.

Nelson was released through to take on Kamil Grabara and lifted a calm finish over the Liverpool goalkeeper to give his team the edge.

But there is no questioning the winning mentality possessed by Neil Critchley’s charges and they increased their Premier League 2 streak to three victories with a brilliant turnaround.

Brewster levelled the score with a left-footer at the three-quarter point of the match and Hart’s thunderous drive from a set-piece in the final minute sealed a creditable turnaround and snatched three points.

Reflecting on the victory, a delighted Critchley told Liverpoolfc.com: "Over the 90 minutes we were deserving of our victory, especially in the second half we were outstanding.

"Our mentality, the way we played, the boys were excellent and we couldn’t have asked any more from them. I’m really proud of them.

"It’s always nice to score a last-minute winner and it was great for Sam to get it because he typified the performance of the team in the second half.

"He was relentless with his running down the flanks and it was brilliant to see him smash the ball into the net in the last minute."

The U23s boss also had words of praise for Ings, who played his first 90 minutes of the season.

He added: "It was brilliant for Danny to play 90 minutes and in the 90th minute he was tackling back in his own corner and winning us a free-kick.

"It was brilliant to see, he did a great job for the team and I’m pleased for him."