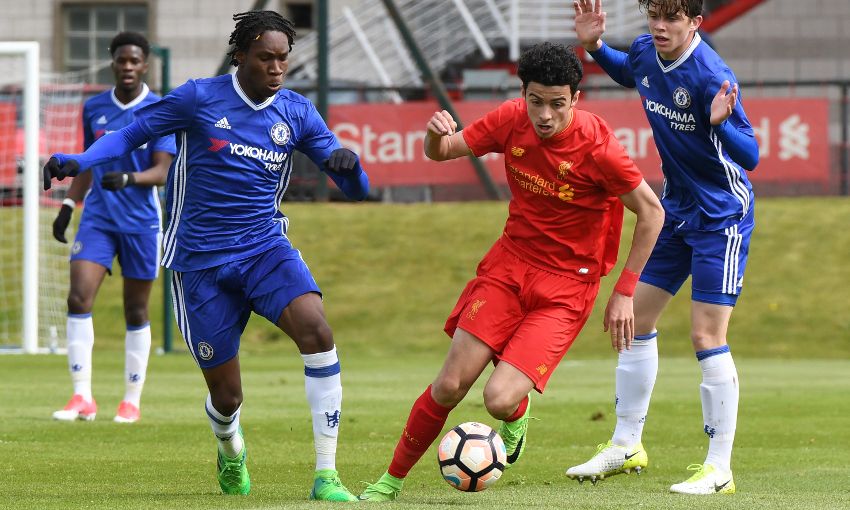 'Gerrard's presence alone is enough to inspire you'

Liverpool U18s suffered disappointment in their final home game of the season as they were beaten 1-0 by Chelsea in a hard-fought contest at Kirkby on Saturday.

Neil Critchley's team went behind early on to Tariq Uwakwe's effort from the edge of the box but were in charge for large spells from then on, particularly in the second half.

However, while their efforts arguably deserved at least a point, the young Reds were denied by a combination of wasteful finishing and the opposition goalkeeper as they had to settle for a one-goal defeat.

Perhaps unsurprisingly for a team that had won the FA Youth Cup in midweek, the visitors made a confident start to proceedings.

But, while they had dominated the early exchanges, there was a degree of good fortune in the way Chelsea took the lead.

And it looked like things were going from bad to worse for the Reds moments later as Ike Ugbo poked home from a corner, though the assistant's flag provided salvation.

LFCTV GO: Watch the best of the action at the Academy

Liverpool responded well to a difficult opening to the match, with Bobby Adekanye curling an effort just wide and Liam Millar prompting a fine reflex save with a turn and shot.

But they were let off again before the break when Chelsea striker Uwakwe somehow contrived to pass the ball straight to Grabara after a parry had given him the majority of the net to aim at.

The Reds produced a fine response in the second period, seeing plenty more of the ball and going close early on through Adam Lewis' free-kick effort.

And they were denied a certain penalty when Okera Simmonds produced a clever turn that invited a trip which only the officials missed.

The hosts continued to pile on the pressure as the game moved toward its climax, with Millar denied again after a quick turn and both Adekanye and Simmonds seeing efforts fly just over the bar.

But the visitors held firm to see out a win that keeps their hopes of a league and cup double alive.

Liverpool will finish off their 2017-18 campaign on Saturday May 13 when they face Manchester City away from home.