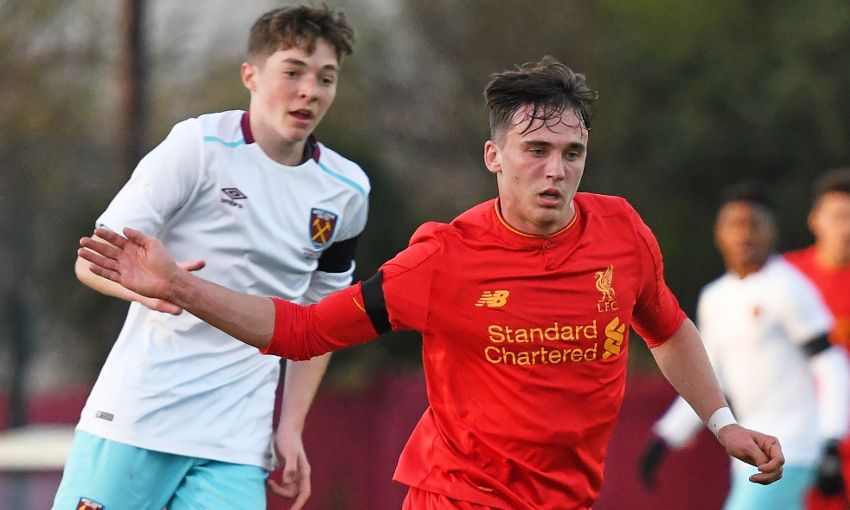 Liverpool U18s were forced to settle for a point from their third end-of-season mini-league outing as they drew 1-1 with West Ham United in dramatic circumstances on Friday evening.

Neil Critchley's team looked set to follow up a draw with Manchester United and a convincing win over Blackburn Rovers with another three points when substitute Okera Simmonds fired in five minutes from time.

The visitors started the game the brighter of the two teams, with Jamahl Hector-Ingram providing an early test for Dan Atherton, sending a firm shot to the goalkeeper's near post after being found by a ball over the top.

That chance served as something of a wake-up call for the Reds, though, and they responded to create two half-chances of their own by way of response.

On both occasions the opportunity came from the left wing, but Liam Millar and Glen McAuley saw their crosses from promising positions cut out in the box as West Ham held firm.

With just over 20 minutes gone, debutant Luis Longstaff showed just why he had been given his chance to start in dancing in off the line before sliding in McAuley.

Unusually for the Irishman, however, he was thwarted in his attempt to finish.

And Liverpool were left thank the heroics of Atherton between the sticks shortly after, as he produced a fine reaction save when Hector-Ingram looked certain to score from a one-on-one.

That proved to be the best opening of a goalless half, but West Ham took less than four minutes of the second period to create another chance that should have seen them go ahead.

Thankfully, though, the dangerous Anthony Scully was unable to keep his close-range effort under the bar.

The Reds were subsequently unfortunate not to get in front themselves when the ball somehow failed to cross the line after pinballing around the box from a corner.

But, true to the topsy-turvy nature of the contest, West Ham responded again through Hector-Ingram, who flashed a dangerous shot across goal.

With less than 10 minutes remaining, the striker was denied again as a scrambling Reds defence did enough to force him to skew wide from inside the box.

And it looked like that defensive effort had proven vital when Simmonds followed in a poor clearance from an under-pressure opposition goalkeeper to stroke into an empty net.

However, after the hosts' goalkeeper Atherton brought down Hector-Ingram just inside the box at the death, Powell made no mistake from the spot to clinch a point for the Hammers.