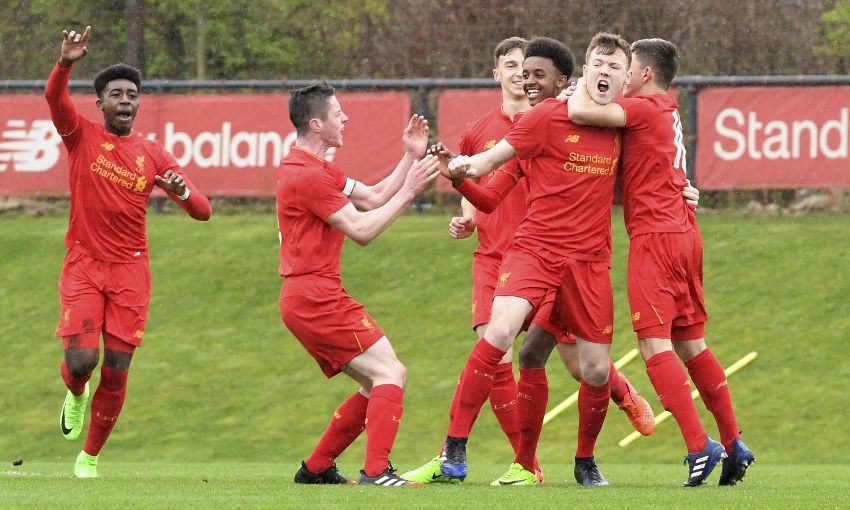 Liverpool U18s claimed their first win in the end-of-season mini-league by beating Blackburn Rovers 3-0 at the Academy on Saturday afternoon.

After the dramatic end to the 2-2 draw with Manchester United last week, the young Reds controlled this encounter in much more comfortable fashion and were well worthy of the points.

George Johnston opened the scoring in the fifth minute amid the wind and rain of Kirkby, before Curtis Jones doubled the hosts’ advantage with a careful header midway through the first half.

Jones then increased the lead in the second period with a delightful shimmy through a crowded area and confident drive, capping off a positive day’s work for Neil Critchley’s charges.

Johnston made the breakthrough with a finish more reminiscent of the watching Steven Gerrard and Steve McManaman on the touchline than anything you may expect from a defender.

A delivery in from the left flank fell to the 18-year-old in the penalty box, and his delightful touch, turn and low shot sent the ball firmly into the bottom right corner.

It might have been two within moments, but Jones directed his effort close enough for the goalkeeper to handle after brilliantly breaking into space along the byline.

Liam Millar’s energy and pace as the spearhead of the Liverpool attack kept his team on the front foot constantly, and the striker was close to reaching an inviting cross into the middle from Okera Simmonds on 22 minutes.

The adventurous Neco Williams attacked along the right hand side and dispatched a sweet cross for Jones – waiting at the far post – to move onto and nod an angled header into the net.

Millar overcame a troublesome knock to continue and Jones was denied a third for Critchley’s side by a late block after he dribbled into the area and struck for goal.

The Reds remained on top after the re-start, though they were grateful for an outstanding piece of defensive play from Liam Coyle, who adeptly scooped the ball away from Brad Lynch as he broke in behind.

Jones walloped a crisp drive against the woodwork at the other end, but his disappointment soon turned to delight on 66 minutes when gloss was added to the scoreline.

He switched play to the wing and collected the return pass into the area before showing sublime footwork to glide past the defence and plant the ball past the ‘keeper in a blur of quick thinking.