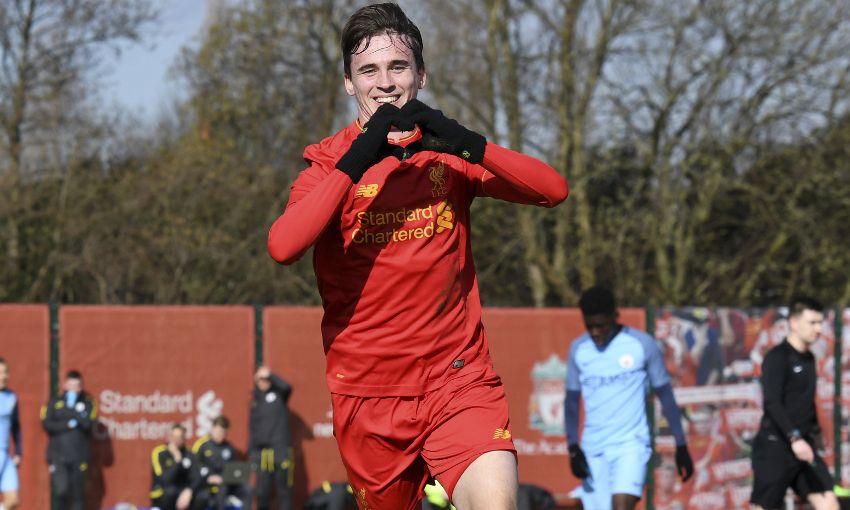 Liverpool U18s claimed an impressive 2-0 victory over their Manchester City counterparts at the Academy on Saturday afternoon.

Goals in either half from Liam Millar and Glen McAuley secured the result for Neil Critchley’s side, who thereby exacted revenge for a pair of defeats against the same opponents earlier in the season.

With Steven Gerrard and Rob Jones urging the home side on from the touchline, the young Reds carved out a lead with only 13 minutes on the clock.

Slick build-up along the right flank allowed Neco Williams to send in a cross for Millar – and the striker produced an excellent finish in turning the ball beyond City goalkeeper Arijanet Muric.

The visiting stopper twice prevented Liverpool from extending their lead subsequently, first denying McAuley – played through at the end of a move which started with a superb Liam Coyle tackle to retrieve possession – moments after the opener.

Muric then matched Millar’s latest effort, the striker having twisted and turned into shooting space from the left channel, and his exertions allowed City to get a grip on the game.

Caoimhin Kelleher was therefore called into action twice to preserve the hosts’ advantage before the break, thwarting Phil Foden from a shot on the angle and at point-blank range.

Critchley’s charges asserted themselves again in the second period and eventually found the goal to put the match beyond City with a quarter of an hour remaining.

LFCTV GO: Watch the highlights from the 2-0 win over City

An exquisite Abdi Sharif pass presented McAuley with the chance to bear down on goal and the clinical forward made no mistake with a sweet first-time strike on his left foot.

George Johnston went close to grabbing a third but saw his header from a corner well saved, though the Reds had already done enough to notch up a satisfying victory in any case.