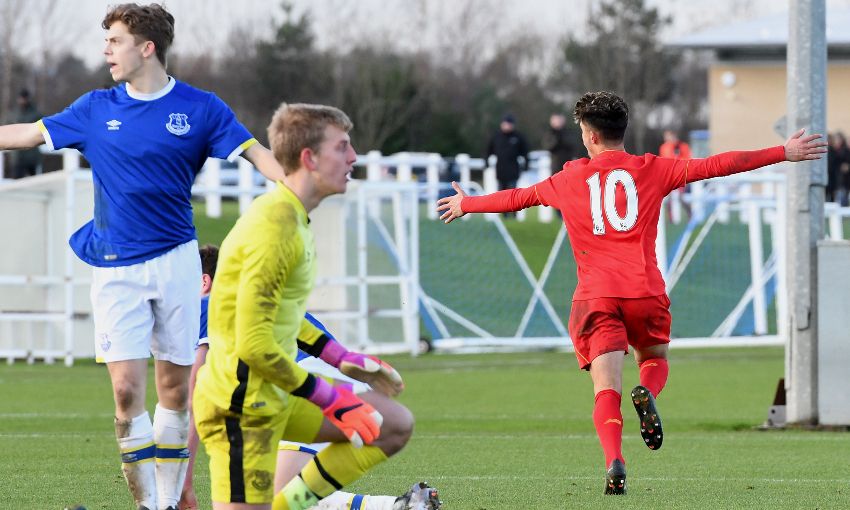 'United under the floodlights at Anfield will be special'

Yan Dhanda struck five minutes from time to hand Liverpool U18s a hard-fought 2-1 victory over local rivals Everton at their Finch Farm base on Saturday.

The striker settled a game of few chances with his left-footed drive inside the box, denying the Toffees a share of the points they looked to have claimed when levelling from the spot just five minutes earlier.

As well as securing local bragging rights, the Reds extended their unbeaten run to 12 games in all competitions with victory, and ended their rivals' streak of 13 fixtures without defeat in the process.

As is typical for a derby, the teams played out a cagey opening to proceedings, with neither wanting to leave themselves exposed.

But when the first real opportunity of the game came on the half-hour mark, it fell to a man in red, and resulted in the visitors taking the lead.

A good advantage from the referee after a foul on Rhian Brewster allowed Rafa Camacho to run behind the Everton defence, and his pull-back was expertly curled into the bottom corner by Okera Simmonds.

Simmonds almost teed up Liam Millar for another moments before half-time, chesting the ball down in a promising position, but the returning striker couldn't keep his effort down.

Everton redoubled their efforts after the break, but were still finding the Reds' backline difficult to break down.

A poked Jack Kiersey effort that trickled through Kamil Grabara's legs before being collected by the Pole was the closest the hosts came to levelling things up before an eventful final 10 minutes of the match.

As the clock struck 80 minutes, Adam Lewis brought down the dangerous Danny Bramall in the box, leaving Fraser Hornby to seemingly clinch a point when he sent Grabara the wrong way.

Dhanda had other ideas, though.

His late arrival in the box after good work from substitute Glen McAuley and Brewster allowed him the space to take a touch before slamming emphatically home to clinch the points for Liverpool.

LFCTV GO: Highlights of the mini-derby