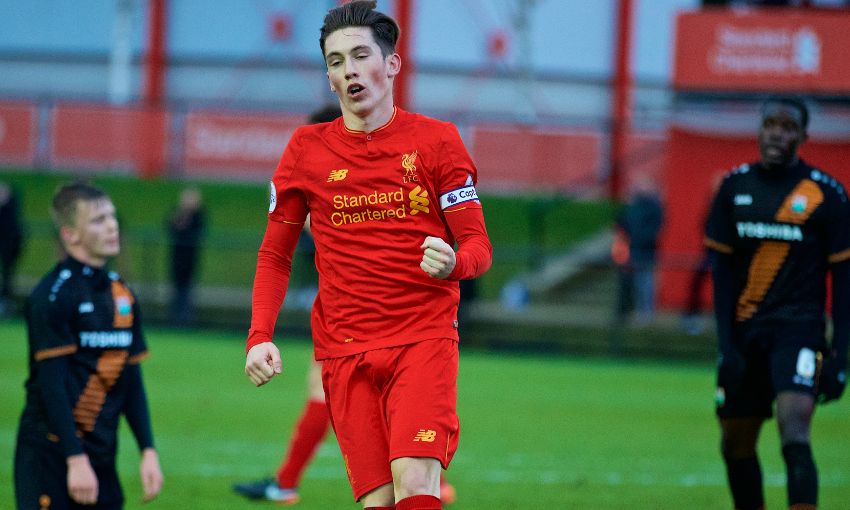 Joy for U18s as they win Hallenmasters tournament in Germany

Harry Wilson netted a brilliant goal as Liverpool U23s produced an impressive display to beat Barnet 4-1 in a friendly encounter at the Kirkby Academy on Tuesday afternoon.

Brooks Lennon was also on the mark as he claimed a brace while Jack Dunn added the fourth goal.

With the Premier League 2 fixture against Manchester United to come at Anfield next Monday night, this was a useful runout for the youngsters, with several members of the squad getting some much-needed minutes.

Connor Randall made a successful return from injury as he played for 82 minutes.

The young Reds started brightly with Madger Gomes catching the eye down the left flank, while at the other end it took a superb interception from Tom Brewitt to deny the away side a clear opening.

On 28 minutes, Lennon was so unlucky when he saw his curled effort come back off the post - but the American was not to be denied and soon struck the opener.

Matty Virtue's superb pass put the No.9 clear and he finished expertly.

Wilson then curled an effort just over the top after a superb one-two with Lennon, before a mistake at the back saw Barnet hit back with the equaliser.

Five minutes before the break, Wilson restored the hosts' lead with a superb curled effort into the top corner following excellent work down the right from Randall.

Liverpool continued their attacking threat after the break and Corey Whelan was unlucky not to score when he stretched at the far post to meet a Paulo Alves cross, only to see his effort drift just past the post.

It was 3-1 on 65 minutes when Gomes did brilliantly down the left flank before his cross was turned home from close range by Lennon. The final touch might have come from the unfortunate Barnet defender, but the striker claimed the goal.

Five minutes later, Lennon was inches away from another goal but he could only fire into the side netting following a superb turn and shot by Virtue.

Dunn was then introduced into the action and had an immediate impact.

He smashed a rasping shot against the underside of the bar and then made it 4-1 after unselfish work from the excellent Wilson.

Reflecting on the outing, U23s coach Mike Garrity told Liverpoolfc.com: "It was a really good exercise for us against a very worthy opponent.

"It was nice to see Connor Randall back in action playing his first game in a while and he looked strong.

"It was also good to give another 90 minutes to Jordan Williams, who is getting stronger and stronger,

"It was great to give the lads good confidence to go into our game against United at Anfield on Monday."

Click here for ticket details for the U23s meeting with United at Anfield on Monday.