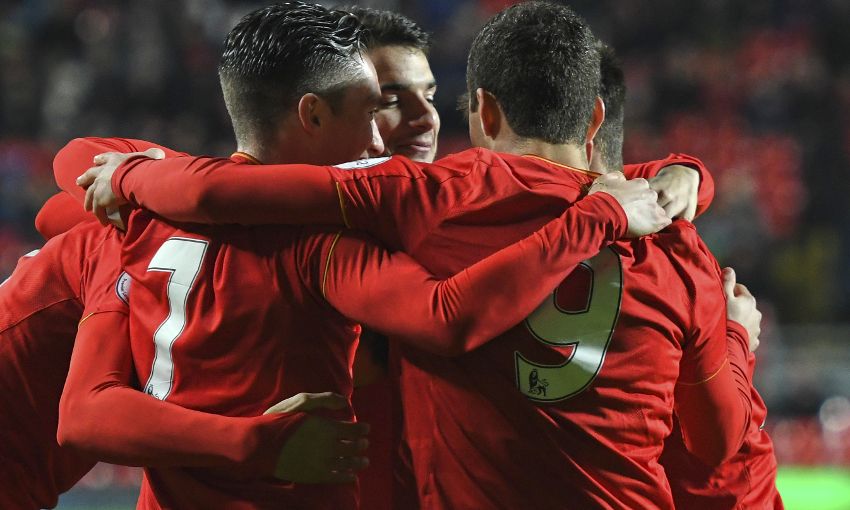 McAuley at the double as five-star U18s thrash Stoke City

Harry Wilson scored twice as Liverpool U23s claimed a 3-2 victory over Arsenal in their Premier League 2 clash at Anfield on Monday night.

The Reds marked the opportunity to feature at the first-team stadium with a performance to match the occasion, as the captain notched a brace and Sheyi Ojo added an excellent third.

Stephy Mavididi was on target twice himself, in either half, but the visiting Gunners were ultimately undone by the clinical showing from the hosts in front of almost 3,000 fans.

Joe Gomez also clocked up another 45 minutes as part of his managed return to action, playing at centre-back during the first period.

LFCTV GO: Highlights of the 3-2 win

Liverpool took the lead within 90 seconds of kick-off as Tiago Ilori lofted a precise pass over the Arsenal defence and into the speedy run of Wilson, who beat the goalkeeper to the ball and made the right connection to dink home.

But the away side responded almost immediately and were on terms in the fifth minute.

Kevin Stewart was dispossessed and the turnover was transformed into a rapid counter-attack that was finished off by Mavididi’s fierce strike at the Kop end.

The Reds were unperturbed by the concession, though, and the referee soon awarded them a penalty when Brooks Lennon tried to reach Joe Maguire’s deep cross into the box and Cameron Brannagan was bundled over by the ‘keeper as he seized on the loose ball.

Up stepped Wilson to send the spot-kick into the bottom right corner for 2-1.

Arsenal threatened to produce another instant response as Reiss Nelson was afforded time to shoot, only for Shamal George to thwart the No.7’s low drive with his foot.

And the home team capitalised at the other end through Ojo, who was picked out by a sumptuous Pedro Chirivella pass inside the full-back and coolly found the corner when one-on-one to extend the lead.

With Ojo a particularly bright source from the left flank and later in a more central role, Liverpool continued to search for further goals – though clear opportunities were harder to come by in the second half.

And, instead, Mavididi set up a tense finale at Anfield on 73 minutes with a lethal side-foot finish from Nelson’s assist at the conclusion of another fast-moving Gunners break.

But the Reds were not to be denied, keeping Arsenal at bay in the closing stages – with the help of a point-blank George save from Eddie Nketiah – to secure an impressive win in their final competitive outing of 2016.