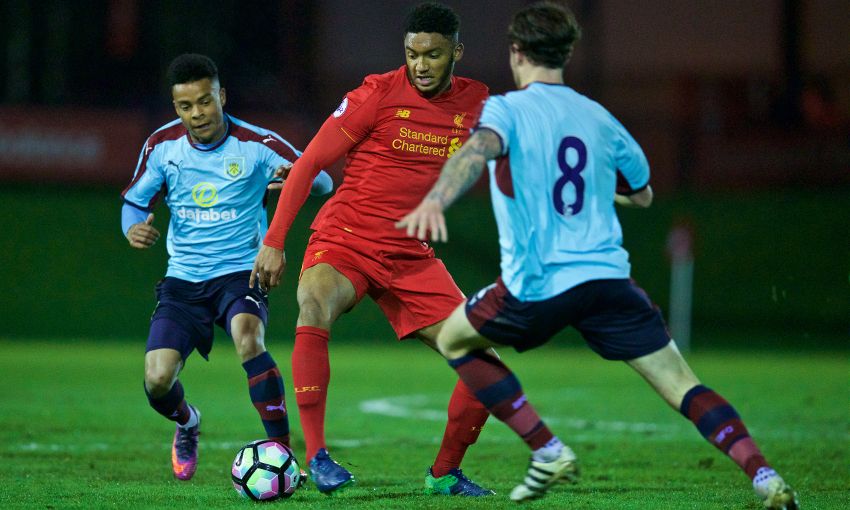 Joe Gomez took another positive step forward in his comeback by playing the full 90 minutes as Liverpool U23s beat Burnley 4-0 in the second round of the Lancashire Senior Cup at the Kirkby Academy on Wednesday night.

The 19-year-old was one of three centre-backs, alongside Mamadou Sakho and Tiago Ilori, during another impressive display from the young Reds.

Gomez - who suffered an anterior cruciate ligament injury in October 2015 - looked very comfortable as he saw a lot of the ball and also provided an assist.

It proved a terrific night for Matty Virtue, too, with the midfielder claiming his first hat-trick for the club courtesy of three outstanding strikes.

Spaniard Madger Gomes enjoyed an excellent game as well, and opened the scoring with a spectacular left-footer from more than 25 yards out that clipped the underside of the bar on its way in.

On 26 minutes, a flowing move down the left flank involving Cameron Brannagan and Juanma found Toni Gomes, who sent a header just over from close range.

But it was 2-0 on the stroke of half-time. A strong run from Jordan Williams allowed him to find Madger Gomes, and his ball across to Virtue was finished superbly.

The midfielder grabbed his second of the contest on 55 minutes courtesy of a Gomez assist, the returning defender providing a lovely pass for his teammate to turn a marker and send a precise, low shot into the net.

Liverpool rounded off a 4-0 result - and assured their place in the quarter-finals - 10 minutes before the final whistle when Virtue produced another fine finish to seal a deserved hat-trick, after great work from Brannagan.

Reflecting on the victory, U23s manager Michael Beale told Liverpoolfc.com: "It was fantastic to see Joe Gomez play his first 90 minutes in a long time.

"He came through it fine and he had a big smile on his face at the end, which was great to see.

"I was delighted for Matty to get his hat-trick. His form has been very good throughout the season and the goals have been coming.

"To see Madger get an excellent goal was also really important and, overall, it was a really good performance from the boys."