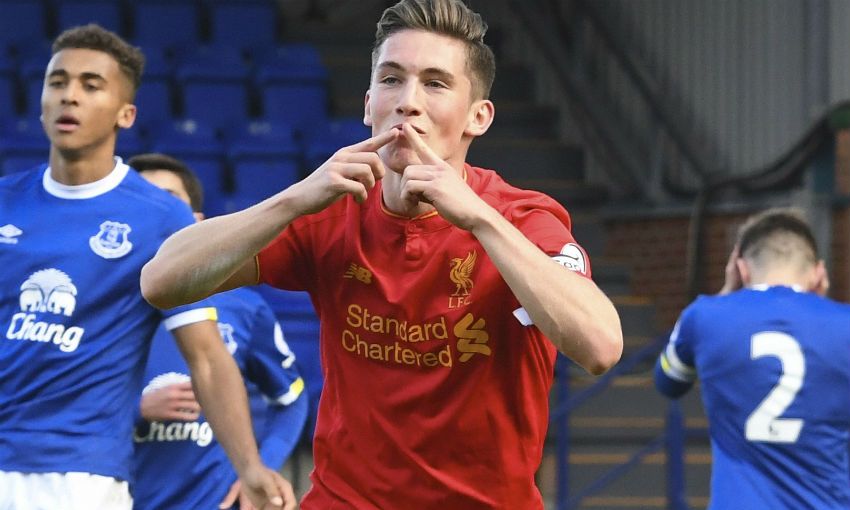 Adekanye on the mark as five-star U18s thrash Derby

Second-half goals from Brooks Lennon and Harry Wilson earned Liverpool U23s a 2-0 victory over Everton in a hard-fought mini-derby this afternoon.

Michael Beale’s side went into the Premier League 2 clash at Prenton Park five points behind David Unsworth’s table-topping Blues, but an excellent performance reduced that gap and moved the young Reds up to second in the standings.

Beale made five changes from Tuesday’s 1-1 draw at Manchester United, with the likes of Danny Ings, Trent Alexander-Arnold and Ovie Ejaria training at Melwood ahead of the first team’s EFL Cup tie with Tottenham Hotspur this week.

And, after an evenly-matched first half, it was Lennon, one of the players brought into the starting line-up, who gave Liverpool the lead a minute into the second period with a towering header from Joe Maguire’s inch-perfect cross.

Wilson then continued his fine goalscoring form this season with a superb low drive from the edge of the area with 14 minutes remaining to seal an impressive win for Beale’s team, who are back in action against Manchester City on Friday.

LFCTV GO: Highlights of the mini-derby

Both sides traded attempts on goal in an entertaining, high-tempo opening to the game.

A rapid early Liverpool counter involving Ben Woodburn and Lennon ended with Wilson curling over the bar, before Everton striker Dominic Calvert-Lewin nodded wide at the other end.

Blues defender Jonjo Kenny had to be alert to block Woodburn’s drilled effort in the 20th minute, and Everton should have taken the lead a little over 60 seconds later when Gethin Jones shot wide from close range.

Liverpool captain Wilson forced Everton goalkeeper Mateusz Hewelt into a save after a sharp one-two with Cameron Brannagan five minutes before half-time, but the Reds were ahead almost immediately after the break.

Maguire sent in a devilish outswinging cross from the left and Lennon climbed highest to power an unstoppable header beyond Hewelt.

Liverpool dealt well with Everton’s strong response to falling behind, but Beale had Kamil Grabara to thank for maintaining his team’s advantage when he reacted quickly to deny Kenny with 20 minutes left.

And Wilson duly doubled the Reds’ advantage in some style, as Pedro Chirivella’s free-kick was only half cleared and the 19-year-old Welshman fired home a perfectly-executed half-volley from 20 yards.

Brannagan almost added a third late on following another lightning break, but Liverpool were left to settle for a 2-0 win as the midfielder’s shot crashed off the crossbar.