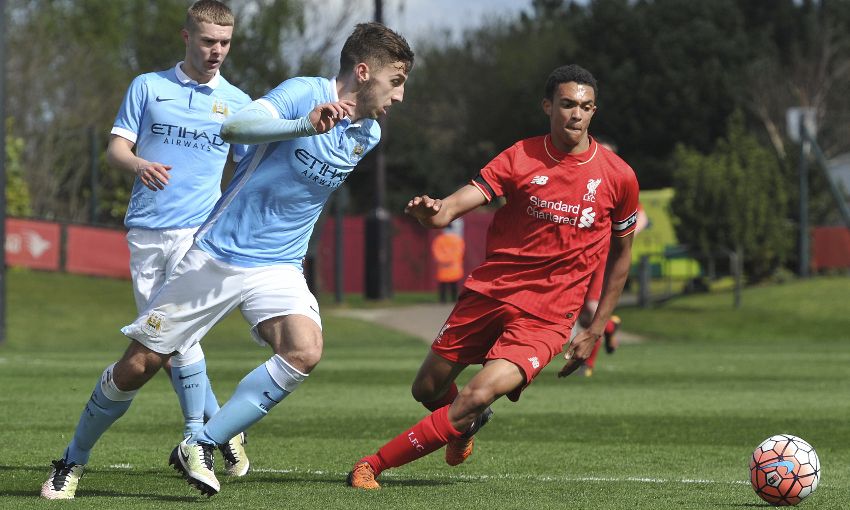 Neil Critchley's charges were beaten by a side featuring a number of players with first-team experience, with goals by Manuel Garcia and Lukas Nmecha each set up by the impressive Brahim Diaz.

The result dents the young Reds' hopes of winning the play-off stage of the Barclays U18 Premier League.

Before kick-off, the Academy fell silent to remember the 96 supporters who died at Hillsborough 27 years ago on Friday.

Liverpool began operating in a 4-2-3-1 formation, with Ben Woodburn supporting Toni Gomes and Brooks Lennon up front and captain Trent Alexander-Arnold on the right wing.

However, it was the visitors who started the game brightly, enjoying lengthy spells of possession.

Both sides were finding it difficult to break down their opposing defences and opportunities in front of goal were slim pickings.

As a result, the deadlock was only broken after City capitalised on a mistake by the hosts in the 36th minute.

Goalkeeper Caoimhin Kelleher's clearance from a back pass fell straight into the path of Diaz and the No.11 slipped in Garcia, who clinically finished to punish the Reds. 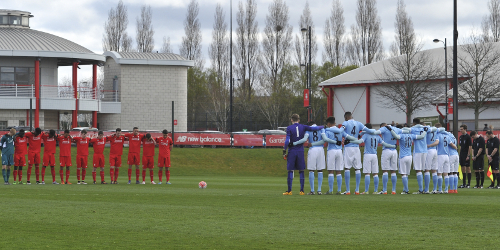 But the Liverpool custodian bounced back minutes later to deny Nmecha, just as the striker was through on goal.

City kept applying pressure and almost made it 2-0 right before half-time, when Nmecha hit the post following a rapid counter-attack.

Critchley made an alteration at the break, bringing on Herbie Kane to replace Kris Owens and putting Alexander-Arnold at full-back.

The away team should have doubled their advantage moments after the restart, as Aaron Nemane, somehow, squandered a glorious opportunity.

The hosts counted their blessings and were beginning to cause the City back four problems.

However, just as Liverpool were gaining a foothold in the contest, another wonderful counter by Jason Wilcox's side led to the second goal.

Diaz provided the pass again and Nmecha's powerful strike beat Kelleher to leave the Reds with a mountain to climb 56 minutes in.

The closest they came to halving the deficit was when Lennon sent an inviting ball across the face of goal, that just needed a tap-in from someone in a red shirt.

Liverpool kept going in their attempts to spark a revival but, on the whole, did not threaten Daniel Grimshaw in the City goal enough.