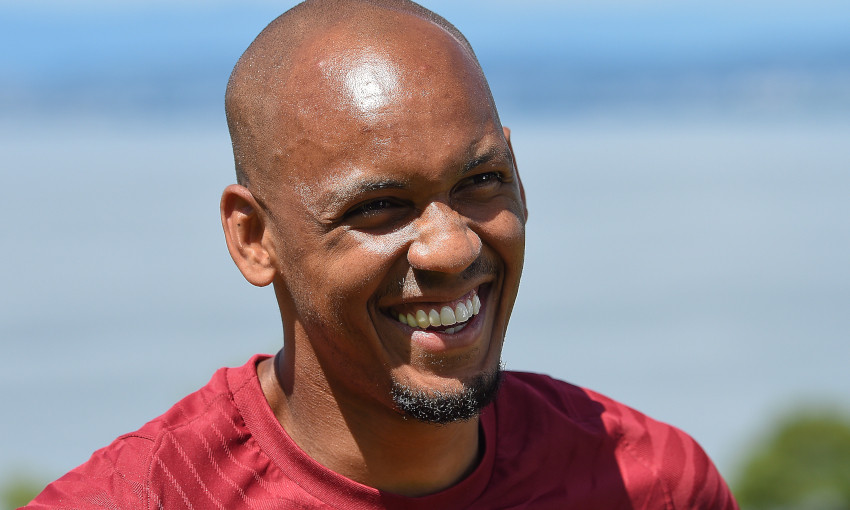 Fabinho sat down with Liverpoolfc.com in Evian moments after signing his new long-term contract – read the interview in full now.

The Brazilian midfielder opened up on his special relationship with the club, attempting a Scouse accent and targets for the future during an insightful chat while out in France.

Watch the interview via LFCTV GO, or read a full transcript below…

Fab, firstly, congratulations on signing a new deal with the club. How are you feeling?

Thank you. I'm delighted to have signed a new contract with the club. Since the beginning of the conversation, I was really positive about it because it's what I wanted – staying in this club, keep playing for Liverpool. Now this is official and I'm really happy.

What were those reasons you wanted to stay at the club?

Look, these last three seasons I've been really happy here. I learned a lot with the manager, with all the staff, with the boys as well. We achieved things together and for me I think it's the best place to be, the best place to keep growing, to keep learning from the staff, from the boys. Hopefully we will keep achieving good things.

Our story goes on, Reds! Very happy to renew my contract and keep wearing this jersey for even longer. I'm sure we'… https://t.co/XoZvOG6HzI

You've said in the past you feel at home here. What makes you feel that way about the club?

It's a bit hard to explain because there are things you feel when you are at the training ground, when you go around and the people, the fans treat you always with love, always say good things to you. So, the people at the club are very special, we have the best fans in the world. These kind of things made me feel at home, so that's it.

You've already been here for three years. Just how are you a different player and maybe person to the one that walked through the door?

In my game I have improved, I think I'm a bit more experienced now and now I'm 27 – I arrived at the club [at] 24. When you play on this level, of course it's natural you will grow, you will learn a lot of things. I don't want to stop here, I know where I can be better, I can help the team to be better as well. I will try to do my best for this team.

How has your opinion of Liverpool as a club changed during that time?

Liverpool since I arrived here was really special. Melwood was already special and now we changed for the AXA Training Centre – it's just unbelievable, one of the best training grounds in the world. As I said, the club, the relationship with the fans, with the city is really special for me. When we play at Anfield it's always special and now I'm looking forward to having the fans back because we miss the fans. Sometimes – as I said before, it's hard to explain – what you feel each day when you are there, you talk with the people, you work with the boys, our ambience is really to work. Those things make Liverpool a great club to be in.

Last year you felt communication and leadership were two qualities you could improve upon, especially when playing in central defence. Do you feel you have improved in those areas?

Yes, I think I've improved in communication and leadership as well. But I want to improve much more because I know this can be something that will help the team. For me personally, as someone playing midfielder or even in defence, it's important to talk to the boys, to have not just the captain but the other boys be in this position as well. Hopefully I will improve much more.

You're back here in Evian, so what's it like to be back with the boys?

So you enjoy it, even though it looks really intense?

Yes, I enjoy it. Of course it's good to have some rest, to have some time with the family to fly somewhere. But our head is always thinking a little bit about the club and the team. I watched some games in pre-season – I was happy for the boys who showed their quality. Now I'm back, I'll be working hard and enjoying the pre-season games because the Premier League will start soon.

It was a tough season last year, but it had a positive end. What’s the target going into the new one?

It was a really hard season, a different season for all the injuries, for COVID, for playing without fans almost all the season. In the end, you finish in the top three, so it was really important for us, for the club being in the Champions League this year. Now the boys are back, some players like Virgil, who was out all the season injured, Joe Gomez, Joel as well. Important players are back, so hopefully they will get the confidence back, they will play and come back to the highest level they have because they will be really important for us. But it was important as well for the other players who showed their quality, like Nat Phillips and Rhys Williams. As a team, we are Liverpool so we look always for good things, like winning trophies. We have to [have] this mentality because we know our quality, we know our team and the manager and the staff are always pushing the team to keep playing our best football. If we do this, I know we can keep achieving great things together.

How pleased were you with how you finished the season personally? In those last 10 games we were unbeaten and you were back in midfield, too...

I was really happy because we could finish in the top four, in the third position, so it was really good for us after our difficulties we had in the season. Personally, I was happy because I could play again as a midfielder, so that was important for me. Of course I can play centre-back with no problem but I think I enjoy it a bit more when I came back to the midfield, played with Thiago and the boys in the middle, it was good. I was happy with the way we ended the league. I remember in the last five games I think we had to win the five and we had the five victories, so that was really important for us.

You even had a headed winner from a goalkeeper as well in those five games...

Yes! And in this game I was like, 'I don't know if we will score' because it was really hard, West Brom was defending with everyone and sometimes the ball [was] in the box and no-one could touch the ball or the 'keeper did a great save. But in the last minute, Ali was in the box and scored a really good goal. I said to him after the game, 'Ali, if the ball came to me, I don't know if I could score.' But the header was perfect, the technique was unbelievable and this was really important for us.

It was a difficult season but did we see in those last 10 games that this team does respond to setbacks and comes back again even stronger?

Yes, of course. It was a hard season but in the moment we had to show our face, we had to play our best football, we won the games we had to win. At the end of the season we knew our goal was to be in the top four and we achieved this.

How at home do you and your family feel off the pitch in Liverpool?

I live with my wife in Liverpool and she's really happy [in] Liverpool. We will start our fourth season here, so she's happy. She knows some people around our house, she likes to go practise sport as well and we like to walk with the dogs as well, so we can do this with no problem in our home. It's good as well because we have our Brazilian friends, so we are always together. Yes, we're really happy in Liverpool.

You’ve even learned some Scouse… I think supporters enjoyed your Instagram video recently...

Haha! Just some words – 'chicken' I think is the easiest word!

Yes! I think, for me, it's the easiest to do the Scouse accent, so I like it.

Who was your inspiration for that phrase?

Yeah, Kostas is much better than me. 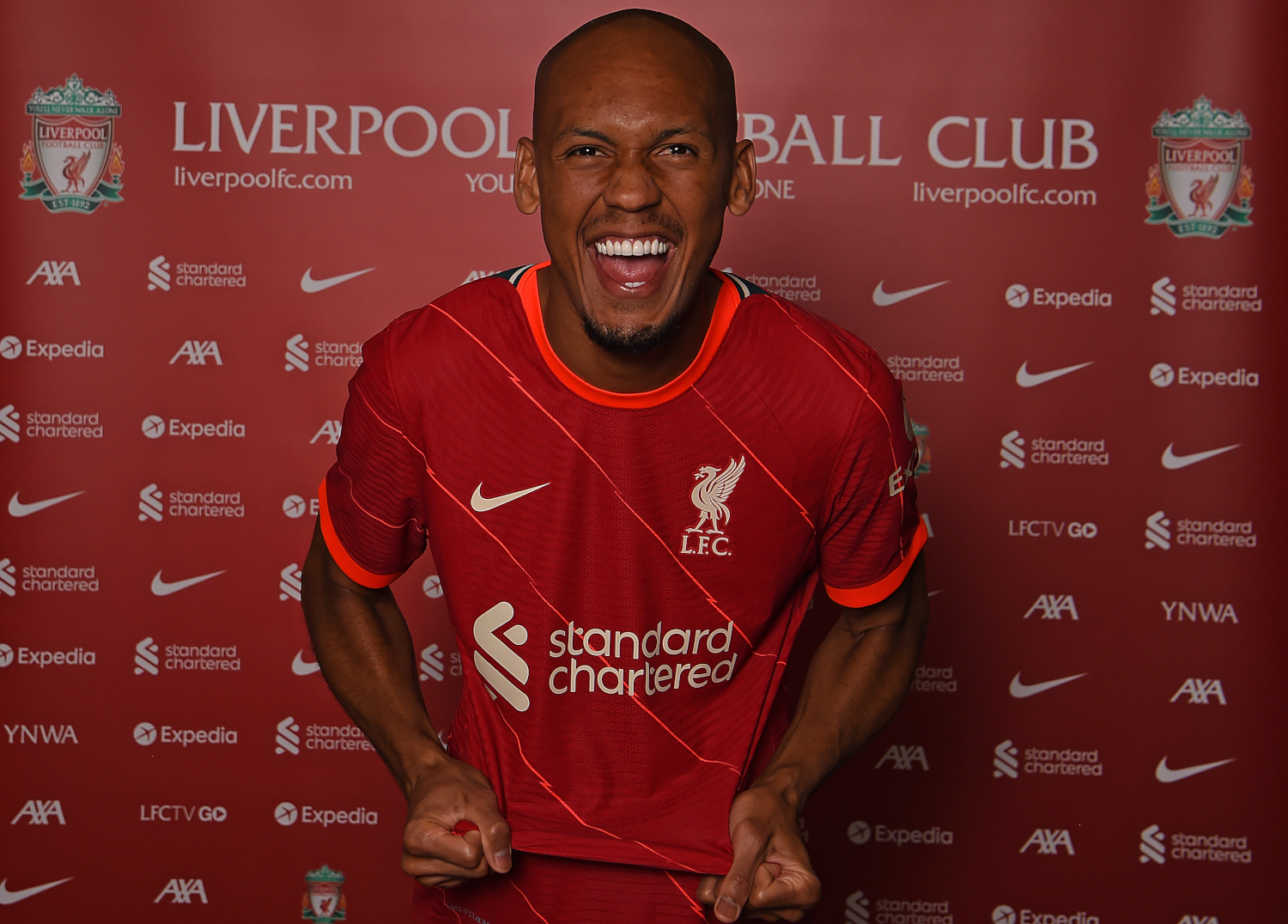 So it's a new long-term deal, what are you hoping to achieve here over the course of it?

As I said before, keep playing for trophies, keep trying to play our best football. As I said, the manager and the staff are pushing us for this because they know our capacity, they know our quality. Personally, as I say, I want to be the best for the team, I want to be an important piece in this team – not just as a player but as a leader as well. Keep learning from the boys and the staff and be the best I can.

What gives you the confidence this team can go on and lift more trophies?

We already did this and we know our quality. We know with these players we can go really far in all the competitions. In the last year we didn't win any trophies, so I think everyone is hungry to win more trophies, win more things, to keep our fans happy. Hopefully we will do this this season.

In terms of the fans, what would you say to the ones that are seeing this interview now?

Thank you always for your support. I'm looking forward to having you back at Anfield because we've really missed you in the last season. Hopefully in the friendly games we will be back with you and will play a great game for you guys. Thank you.