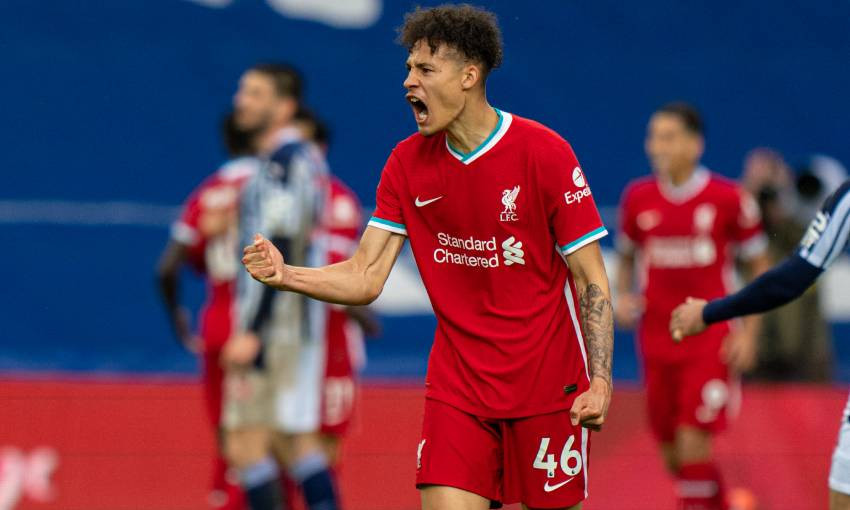 Rhys Williams looked ahead to the biggest week of his young career as he tries to help Liverpool secure Champions League football for next season.

The 20-year-old is relishing the chance to play his part in the Reds' push for a top-four finish in the Premier League, having started the recent victories over Southampton, Manchester United and West Bromwich Albion.

Jürgen Klopp's side head to Burnley tonight for another must-win encounter before concluding the campaign against Crystal Palace at Anfield on Sunday afternoon.

Liverpoolfc.com caught up with Williams at the AXA Training Centre ahead of the trip to Turf Moor – read on for his preview of that contest...

Rhys, how big a moment do you think that 95th-minute Alisson winner at West Brom was for the team?

I think that's going to be the moment we look back on if we continue the way we are and we win our final two games. It's a defining moment, I can't speak on anything that I've seen better than that. It's the biggest thing I've seen so far this season.

Have the players been sharing memes and videos of the goal in the squad's group chat?

There were a few voice notes that went in – Ox sent one in of him going absolutely crazy in his front room. Yeah, there's been a few things knocking about but it's good-hearted banter.

What kind of support is Alisson for young players, particularly when you've got the confidence behind you of someone as good as him?

With everything he's been through, and I can't imagine how hard it's been for him this year, we've all been there with him as a family. When one of us hurts, we all hurt. It must've been tough. But for him to do that, I think it couldn't have happened to a better person. He's one of the nicest people I've ever met, to be fair, and he's coached me through a lot of games, along with the other senior players in the backline. I'm really happy for him and he's a top man.

What kind of momentum does that moment give you now?

That's the biggest thing – we never give up. We've got two cup finals left and if we win both it puts us in the driving seat. So our mind is focused totally now on Burnley, not looking forward to anything else, not looking at other teams. We're just focused on the job we have at hand and hopefully we can do that.

You've always waxed lyrical about Virgil van Dijk and how you were watching him closely when you were in the Academy. How bizarre a situation is it now for him to be giving you advice?

To have the best centre-back in the world on tap for advice, it doesn't get any better for a young player who's not had a lot of experience in the professional game. When you've got someone like that who you can go and ask if you feel like you need any help or situations in games where you could've done better, he will give you the right advice because he's a nice man and he's the best in the world, for me.

Give us an insight into the levels of preparation you go through behind the scenes when you haven't been playing this season...

For me, it's always just been about waiting and hoping that I get a chance. This season, fortunately enough for me, I have. But it's always about staying sharp in training, trying to show the gaffer and the staff what you can do if you do get called upon. It's never, 'Oh, it's an easy session so I might take it a bit lightly.' You can't do that around the standard of players and the standard of staff around because you get found out. For me, it's just been putting in everything in every session until I can't really walk.

Looking ahead to Burnley, is the manager having to say much to keep you relaxed ahead of what you've termed as two cup finals?

I think that's more down to the players. The boss knows that we've got a good group of lads. Millie has been coming to games recently as the senior player in the squad to keep us motivated, keep us relaxed if we need that. It's more down to the players really. We know there's two huge games left for us this season but we can't go into games thinking we've got to score in the first minute. Like we saw against West Brom, it might come in the 95th minute from our 'keeper! I think we've just got to stay relaxed and we'll let the football on the pitch do the talking.

Just on Milner and the other senior players, it must be such a massive pillar of support. They don't have to do that, do they?

Mille was at the West Brom game a few days ago. For him to take time out when he probably doesn't really have to, but the fact that he feels that involved in a team and he knows we're one big family... he's the bigger presence around the squad. That's brilliant for young players because before the game he was speaking to me and Nat, giving us advice. You can still hear him from the stands, he's almost like another coach. When I was having a bit of trouble with the striker, he was telling me to get Fab in front or to get Robbo to block him from running in from the side. To have Millie there, it's massive for us.

Finally, Rhys, is this the biggest week of your life?

Yeah, definitely so far. I don't think anyone at the start of the season really knew who I was, or I didn't think I would have got the chances that I have. But if I can do what I need to do and get us into the Champions League places, then I think that'll be the biggest thing for me in my career so far. We just need to keep going, we've got good players around us. Me and Nat, we're young, we're still learning but hopefully we can just do our job and get us into the top four.