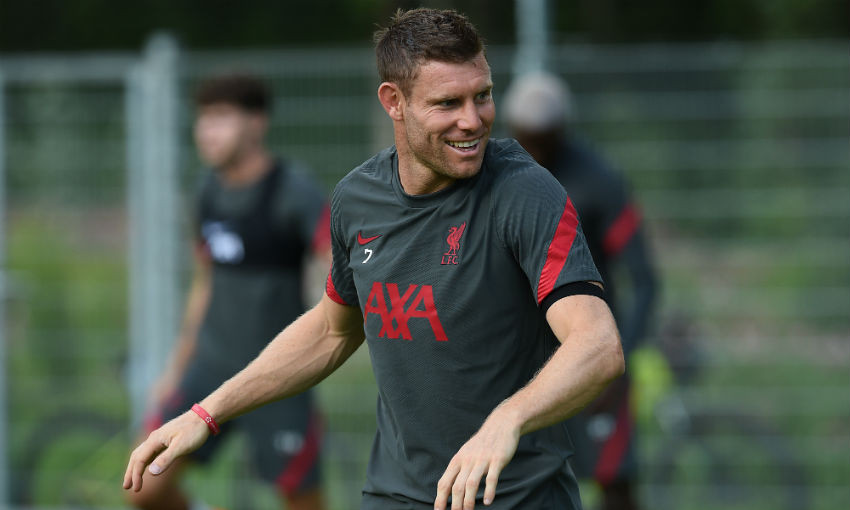 Entering his 19th season in the Premier League, James Milner is well-versed in the reality of football not standing still.

The vice-captain is speaking to Liverpoolfc.com shortly after the squad's first day of pre-season work at their picturesque training camp in Austria.

It's not even been a month since the Reds lifted the Premier League trophy. But in the mind of Milner, it's now time to put 2019-20 in the past and start afresh.

"This is the start again of an even tougher season," the No.7 says. "I think how good we've been over the last two seasons has been incredible, but if we stay at that same level it won't be good enough.

"Everyone else is pushing, everyone is improving and we have a target on our backs and they're going to want to knock us off the top. So it's down to us to keep improving, keep pushing.

"You see the mentality of the squad and the hunger and the togetherness, I don't think that'll be a problem. But it's down to us to prove that.

"Talk is easy – you can say what you want, it's about proving it on the field. We've managed to do that over the last few years and recover from setbacks and disappointments.

"Now it's time to go again and keep pushing and have that hunger even when we've been successful.

"That's the task for us but the teams in the past have shown how difficult it is to retain that league title. That'll be a big challenge."

Being champions, of course, brings about a certain standard that's now expected.

"There's that pressure when you step out of there when you're wearing the Liverpool shirt anyway – you're expected to be the best you can be.

"But obviously there's that pressure there to live up to that but that's the good pressure, that's the sort of pressure you want and what you've earned.

"You earned that right to be called champions but then you have to go and prove it and do it again.

"I think everybody is focused and ready to go again and hopefully have a real good run at retaining it again."

Inside Training: Reds regroup in Austria for the first day back

Klopp's men have now forced four alterations of Melwood's Champions Wall in the past 14 months.

But simply put, this group of players don't want to be remembered for just delivering the club its first Premier League crown and a European Cup, along with FIFA Club World Cup and UEFA Super Cup titles. They're out for more.

"We've managed to win a few trophies and I think the first one is always the most difficult and we managed to get over the line and get that confidence and that hunger to go and win more. It'd be great to be able to win as many as we can.

"You can say, 'Only won one so far', it's been a few good years but we want to add to that and that's the hunger that we have. We'll keep pushing each other every step of the way."

"That's what you inspire to improve every single time you walk into Melwood," he says. "You see the unbelievable teams and achievements that the team has achieved over the history of the club and obviously you want to contribute to that.

"That's what you want to do when you join the club. You've got high expectations and big things to live up to, pulling on the shirts of the club and legends who have worn it before, so it's big expectations.

"So to deliver is great and the thing that everyone's aware of is that you can't rest on your laurels. That's not what we want but that's not expected as well. You're expected to deliver every season and that's the ruthless and brutal part of football, I suppose.

"When you have had success, you don't get long to enjoy it and dwell on it. You have to go straight again and push yourselves to go and achieve again."

Watch our exclusive interview with Milner from the team hotel in Austria in full on LFCTV GO tomorrow. You can start a free one-month trial of LFCTV GO now and this can be cancelled at any time.